The Church isn’t what we think it is.

The Church isn’t what we think it is. They’ve wrenched us away, like infants, from the breast of our mother, the Orthodox Church. They’ve taught us other things. They’ve given us tinned milk to drink. They’ve cut us off from our roots. They’ve separated us from Tradition. They’ve expelled us from our home. They’ve made us aliens in our own land. They’ve made it their business for us to unlearn our native language.

Who are they? Those who want to save us through compulsion, the Enlighteners, the Propagandists, the Bavarians and Masons… to this day. And with them, all those we considered the lights of their light, their cultural progress. And so, blindly, without spiritual discretion, we have taken every single thing from them, as if it were superior, better (in art, justice, the organization of life, architecture, music…). And our whole being is in torment. Our organism is rejecting, one by one, the foreign, transplanted bodies. And all the time they force new transplants on us which are also rejected. Instead, the deeper character of our people is revealed in its personal behaviour […] 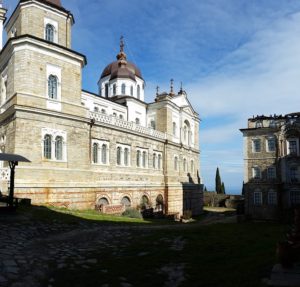 The Church isn’t what we think it is. It’s not what we’re striking at, what we’ve been told to destroy. Orthodoxy has no relation to the ‘medievalisms’, ‘mysticisms’, or ‘clericalisms’, or ‘scholasticisms’, we hear about. So many people brought up in the West are of the opinion that all words mean the same in both East and West. And they try to heal us of illnesses we’ve never had. And their cures make us ill. And they confuse us with their solutions.

We don’t deny that there are human weaknesses. People were and are weak, with failings and faults. This makes Orthodoxy itself more attractive and demonstrates the tolerance of its love and the truth of its message.

The great thing is that we should get to know the Orthodox Church, which we don’t know. Its undefiled, unblemished, spotless heart. That which constitutes our deepest and truest being. That which we have a far greater connection with than we think. That which we know more profoundly, without understanding it. That which we’re subconsciously drifting towards rejecting, because we’re ignorant of its truth, its theanthropy and the glory of its humility.

Everything of value which real seekers are looking for is to be found here. Not in fragments, not in part, or in the imagination, but in every good work and in truth.

It’s suited to little children, ordinary grannies and the most demanding investigators who wish to see God, not as far as they can, but as He is.

There’s a theology that expresses itself negatively (apophatic theology), which limits itself to what people on earth can’t transcend. And there’s an uncreated grace, invisible and inconceivable which visits people and the creation. And it makes people new and makes them divine.

Theology isn’t scholasticism nor is the spiritual life Puritanism.

When we know Orthodoxy as it is, we find our balance; we can look upon everyone with affection. We can be helped by everybody. And, by God’s grace, we can help everybody.

Becoming Orthodox doesn’t mean closing in on ourselves, but rather coming out of ourselves; to match the stature of the cross of love.

If the theology of Church were what many people think, that which is taught in sate universities; or if it were the kind of devotion of the sterile piety imported from abroad, I confess we wouldn’t say anything to you. We’d have no hope and, perhaps, even no responsibility.