The Miraculous Last Outpost of the Roman Empire

This summer ten Norwegians were granted an audience at The Holy Mountain, the last remaining part of the Roman Empire. The monks who live here tell stories of miracles and wonders as a normal part of everyday life. 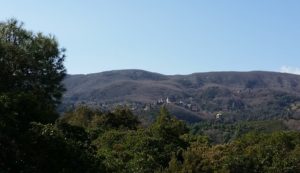 Mount Athos has been called the one place on planet earth that has changed least over the centuries. The Orthodox monks who dwell here, live as they did during medieval times, praying and working. They come to dedicate their lives completely to God, and the last thing they want is for the hard-to-reach peninsula to become a tourist attraction. Nevertheless, the monastic republic in northern Greece has a remarkable pull on people from all over the world. When the famous CBS news magazine 60 minutes in 2009 asked permission to come do a story on The Holy Mountain, the request was categorically denied. It took two years of negotiating before one of the monasteries finally said yes. It was therefore not without trepidation that the Norwegian journalist set foot in Karyes, the administrative centre of Mount Athos, before setting off on foot towards the ancient monastery of Iviron.

The forest on each side of the footpath has a jungle-like appearance. Wild edible peas, dill and oregano grow in several places. Suddenly we notice the wonderful fragrance of incense – the smell is easily recognized from the Orthodox liturgy. Yet here we are, in the middle of the forest, and no one is swinging the censer.

– Small signs and wonders such as these happen all the time here on Athos, says Panagiotis Pavlos. He is a scholar of philosophy at the University of Oslo, and presently our local guide. We are not far from the house of saint Paisios (1924-1994), regarded as one of the holiest men of the monastic peninsula. While he was alive people came by the thousands to visit him – on this very path. They were healed from all kinds of diseases, delivered from demons, and received spiritual counsel. It was said that his mere presence could change the hearts of the pilgrims who came to see him, and draw them towards Christ.

Panagiotis was himself one of the many people who came to visit the saint’s kellion (monastic cell) in the forest, and is a friend of the monk who lives here today – father Arsenios.