Ascetic literature is a form of Patristic theology which appeared and was cultivated within the context of monastic communities. Every work, or even maxim of ascetic literature was aimed at the spiritual edification of the particular community to which it was addressed. However, all the references in ascetic works are aimed at the restoration and promotion of people’s relations with God and their fellow human beings, as well as the whole of creation, which is the central purpose of the Christian life. 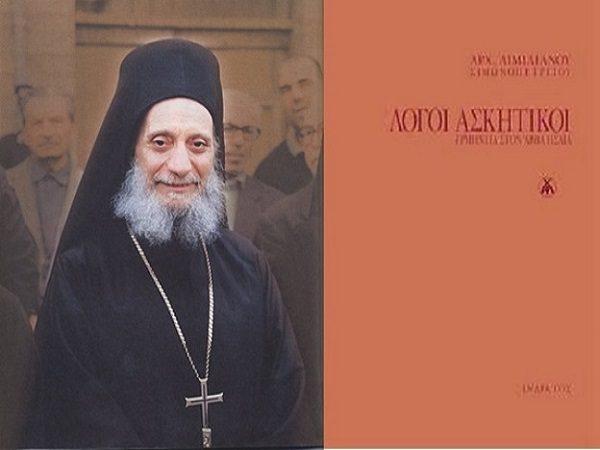 This aim is comprehensive and timeless, addressed to all Christians, in all epochs, without exception. This is what justifies the interest of Christians from all eras in ascetic texts. This interest increases when we are concerned with texts from our own days, that is, when the texts are addressed to people who were born, grew up and live in our own social environment, because the shared experiences are evidently greater and more immediate as compared to those of earlier generations.

A relatively recently published work by Elder Aimilianos Simonopetritis «Λόγοι ασκητικοί: Ερμηνεία στον Αββά Ησαΐα [1]» (Ascetic Discourses: Interpretation on Abba Isaiah). In this work, as in others published after it, Elder Aimilianos follows the method of systematic annotation, which was the basic hermeneutic tool of the whole of Patristic literature. The annotation to the work of Abba Isaiah, however, carries particular weight. This is a work which penetrates deeply into human relations. The attitude of people to their neighbors and the society in which they live- in particular that of the monastery- is presented and analyzed in detailed fashion. The analyses are so extensive and detailed that the impression can sometimes be created that we are dealing with a kind of Christian manual of ‘savoir vivre’. This misconstruction of the work of Abba Isaiah is common in the Christian West.

This is not the case with Elder Aimilianos, however. The teaching of the Elder, through his interpretation of Abba Isaiah, is aimed at demonstrating the transformation of the human person in its entirety. The Elder is not interested in developing some system of morality, but looks at people from the perspective of their perfection. Our perfection depends exclusively on the dynamics of our relationship with the ‘Other’, where the ‘Other’ is our neighbor, that is, every other human person, the whole of humanity and God. These two paired relationships, person and fellow human being and person and God can’t be understood independently of each other. People can’t ‘reach’ God unless they first ‘pass through’ their fellow human beings and they can’t understand their fellows except through their relationship with God.

Of course, this nexus of relationships is not something that we encounter for the first time in Elder Aimilianos. It is the common thread which runs through the whole of Christian literature, from the New Testament tests to the ancient and modern theological writings of the Fathers of the Church and today’s academic theologians. But we would have to say that we believe that Elder Aimilianos, with his teaching, illumines facets of these relations in a particular way and indicates a dynamic which, even though part of the ascetic, niptic tradition, is also original and unique.

Another reason which makes Elder Aimilianos’ teaching on one’s neighbor particularly important in relation to the most ancient works of ascetic literature, is that it has been written in our own day. Perhaps the most important change lies in the identification and experience of the individual dimension in the human person. It is a truism now to say that the individual, as an ontological and social value, has, for centuries, been the basis of modern civilization. Individualization permeates almost the whole of our human relationships.

The ascetic texts which Elder Aimilianos annotates and analyzes were written at times when the view of the human person in the modern sense simply did not exist. As a result, many issues related to inter-personal relationships were viewed in an entirely different manner from the way they are today. This is enough to make us wonder or consider whether the circumstances referred to in a text such as that of Abba Isaiah can be held to be self-explanatory in today’s day and age.

It is here that we believe the most important contribution of Elder Aimilianos lies. Since he is himself an integral part of the centuries-old ascetic tradition of the Orthodox Church, he has absorbed the experience of the Holy Spirit and the teachings of the niptic Fathers, bringing them fresh and alive into the contemporary reality in which he himself lives, the monastic communities he has created and cultivated and of which he is the head. So he gives us a discourse which is authentic and true to tradition, but which is also lively and relevant to today, which delves deep into the human psyche and embraces all the facets of the social interactivities of those people who, despite the fact that they have been born and bred in today’s individualistic era, dare to approach and follow the life of the Spirit.

The text flows and is readily comprehensible. Readers come into contact with descriptions which they can easily recognize as mirroring their own. We see concepts which are sublime and, at the same time, of great depth, unfolding within the routine of everyday life. There are times when it seems that the text is repeating itself. Careful study, however, reveals that there are no repetitions, but rather the explanation of new facets of the spiritual life and Christian social relations. The ‘other’ becomes our main object of study and interest. ‘God is lost to our eyes when our neighbor is lost. Any disruption of human relations is an entirely unnatural condition’ (p. 34).

Elder Aimilianos’ interpretation of Abba Isaiah is a work addressed to every person in today’s world. At a time, such as our own, which holds infinite possibilities for each of us and, at the same time, great loneliness, a book by a person who has already achieved recognition by the Church in his own lifetime, a work which dissects inter-personal relations in depth, with the aim of breaking down isolation, certainly has a great deal to tell us.