Both Luke’s Gospel (1:3) and the Book of Acts (1:1) are addressed to a man named Theophilus, whom Luke calls “most excellent” (kratistos). This honorific adjective, which in antiquity a person might use when approaching someone of a higher social class than himself, was deemed especially appropriate for addressing government officials. Indeed, Luke himself provides three examples of this usage: the letter of Lysias to the governor Felix (Acts 23:26), an address to the same man by Tertullus (24:3), and St. Paul’s speech to the governor Festus (26:25). It is not surprising, then, that many interpreters of Holy Scripture think Theophilus was a Roman political figure. This is an attractive and likely suggestion. 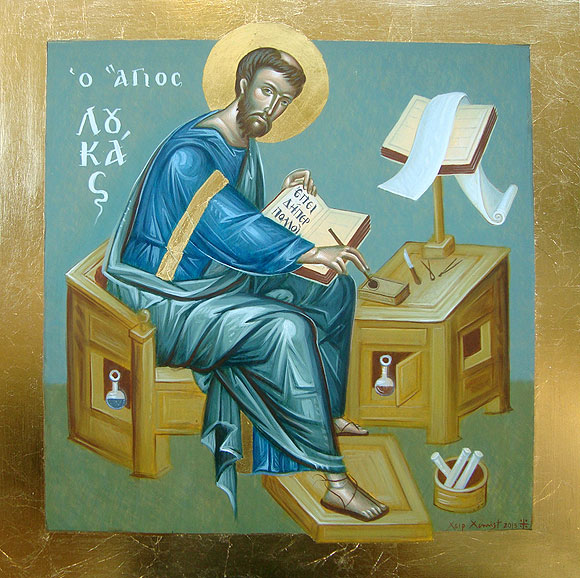 Many of these same biblical interpreters go on to contend that Theophilus was perhaps a sympathetic Roman ruler, but still a pagan, whom Luke was endeavoring to persuade of the truth of the gospel. They argue, in other words, that Luke’s intent in these two books was largely apologetic, rather much like Paul arguing his case before Festus and Agrippa (26:2–23). These exegetes believe that Luke was thus recommending the merits of the Christian faith to the official Roman world as represented in Theophilus.

One may mention two reasons for believing that this line of interpretation is not very likely. First, though the Book of Acts does contain several apostolic speeches of an apologetic nature, Luke’s two works on the whole are not marked by the directness and simplicity normally characteristic of an apologetic case. As many of those same biblical interpreters have shown, Luke’s thought and style are theologically very complex and subtle. He was clearly directing his Gospel and the Acts of the Apostles to mature believers already inside the Church.

Second, Theophilus himself was certainly no pagan, because Luke explicitly mentions his having been “catechized” (katechethes, Luke 1:4). This expression means that Theophilus had already received the normal basic instruction given within the Christian Church (1 Corinthians 14:19; Galatians 6:6). His experience in this respect was doubtless identical to that of Apollos, who also was “catechized” by Priscilla and Aquila (Acts 18:25).

The basic catechesis among Christians was essentially oral rather than literary. Indeed, this is indicated even by the etymology of the word “catechesis”: kata-echo, “by way of echo,” an expression suggesting much recourse to repetition. The fundamental teaching in the Church was to have an echo quality, involving a generous amount of “repeat after me.” Truly, this is how the gospel itself is handed on to each new generation of believers: “I received from the Lord that which I also delivered to you” (1 Corinthians 11:23). Catechesis is thus no place for innovation and experiment.

Nonetheless, the New Testament also indicates that deeper explorations and more detailed explanations were provided for Christians who had already been catechized in the basics. The Epistle to the Hebrews, for example, clearly distinguishing between these two types of teaching (5:12–6:2), says, “let us go on to perfection.”

Similarly, it was Luke’s intention to provide Theophilus with a deeper, more detailed, and “perfect understanding” of the doctrines of the faith, “just as those who from the beginning were eyewitnesses and ministers of the word delivered them to us” (Luke 1:2–3). It was to furnish this further instruction that Luke composed his Gospel and the Book of Acts.

Luke had in mind, of course, that these books would be read by other Christians besides Theophilus, and we would surely be mistaken if we imagined these books as intended for a private library. On the contrary, both works were composed for the very purpose which, in fact, they have always served in the Church, namely, the public proclamation of God’s Word within the church’s worship. Indeed, both books make pointed references to God’s people assembled for worship.

Why, then, is Theophilus himself the person addressed at the beginning of each work? Unless he is to be understood as a purely literary addressee, like the “Malcolm” of C. S. Lewis, the most reasonable explanation is that it was Theophilus who made the production of these books possible. At the very least this means that Theophilus supported Luke while he wrote the Gospel and Acts. All of us, in this case, are very much in his debt.

“Most Excellent Theophilus” first appeared in the December 2002 issue of Touchstone.