The sacrament of the Divine Eucharist was prefigured by a variety of events in the era of the Old Testament. These events were investigated from as early as the time when the New Testament was being written. They were interpreted and analyzed by the writers of the New Testament, and thereafter by the Fathers of the Church, not only because they’re noteworthy in themselves, but also because they were harbingers of the Truth. The advent of Christ didn’t mean a commentary on the old, nor a transfer from the relative to the relative, but a progression from the old (enslavement) to the new (liberty. His presence “makes all things new, and the very fact of His incarnation is “he only new thing under the sun”. 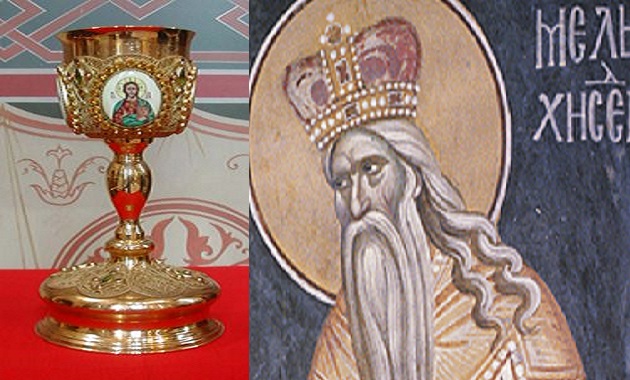 1. The first historical event through which the Divine Eucharist is prefigured is the offering of bread on the part of Melchizedek. In his letter to the Hebrews, the Apostle Paul interprets this and says that Christ became a High Priest “after the order of Melchizedek”[1], who was “without father, or mother, without genealogy, with neither beginning of days or end of life”. Melchizedek is a model of the Son of God[2]. Along the same lines as Saint Paul, Clement the Alexandrian considered the oil and wine offered to Abraham by Melchizedek to be a prefiguration of Jesus as the Eucharistic Bread and Wine[3]. “Melchizedek, the king of Salem, the priest of God the Most High, who gave the food of the oil and wine as a model of the Eucharist”.  Kyprianos of Carthage also considered Melchizedek to be a model of Christ, and his offering a type of that of Christ: “In the priest Melchizedek, we see the mystery of the sacrifice of the Lord prefigured”[4].

In line with this tradition, Saint John Chrysostom writes of Melchizedek: “Moved by the spirit of prophecy, when he had grasped the offering that would be given in the future for the Gentiles, he praised God with wine and oil, imitating the Christ Who was to come”[5]. So the offering of bread and wine on the part of Melchizedek was no accident. It was an action inspired by the spirit, which heralded the sacrifice that would be offered on the part of the whole world. Melchizedek received “in a mystery” the grace of the unique sacrifice, “of the slaughtered lamb from the beginning of the world”[6]. In the Holy Spirit, he was able to understand an event that had not yet occurred in time and many centuries before the advent of Christ, Who imitated his offering. Chrysostom writes that Divine Scripture “by revelation and in advance manifests that which is to occur in the future”[7].

Comparing the Jewish sacrifices and the offering of Melchizedek, Efsevios (Eusebius) of Caesarea tells us that at three points the latter was superior to the former: a) it was offered by a priest who didn’t belong to the family of Levi: “because he was not chosen by people, nor was he revealed by a manufactured unction, not did he belong to the tribe of priests, nor did he serve God in the Highest with sacrifices and libations”; b) Melchizedek’s offering took place outside the temple in Jerusalem: “ nor did he make his offering in the temple in Jerusalem, and c) it was a bloodless sacrifice: “Nowhere does it appear that he used material sacrifices”[8].

But if the sacrifices of the Jews differed from the offering of Melchizedek, how much more were they different from the offering of Christ. “For in the Old Testament, because people were less accomplished spiritually, the blood they offered to the idols was accepted by Christ, in order to remove it from the idols, an act that was the result of indescribable affection. For here the ritual was subsumed into the more dread and magnificent sacrament, so that this sacrifice changed and He gave the command that they should offer Himself instead of  the slaughter of animals”[9]. “For  this, (the Jewish sacrifice, was made by hands, whereas that of Christ was not made by hands.

The former had blood, the blood of goats, whereas the latter had the blood of the Lord”[10]. “Because you do not have cherubim (in the Christian sacrifice), but the Lord of the Cherubim Himself, dwelling within you; and no jar, and manna or tablets of stone and the rod of Aaron, but the Lord’s own body and blood, and the spirit instead of the written commandments, and grace that surpasses human thought, and an indescribable gift…[11]”.