2. Besides, the person of the Patriarch Isaac, his birth and the offering of him as a sacrifice to God by his father Abraham have attracted the attention of many interpreters of the Holy Scriptures.

Isaac truly was born through the promise of God. He was born of a mother who was sterile and a father who was well-stricken in years. According to Paul, this means that we, the faithful, “are offspring through the promise of Isaac”, precisely because Isaac was born from a sterile mother, just as the Church was sterile before the advent of Christ and the descent of the Holy Spirit. 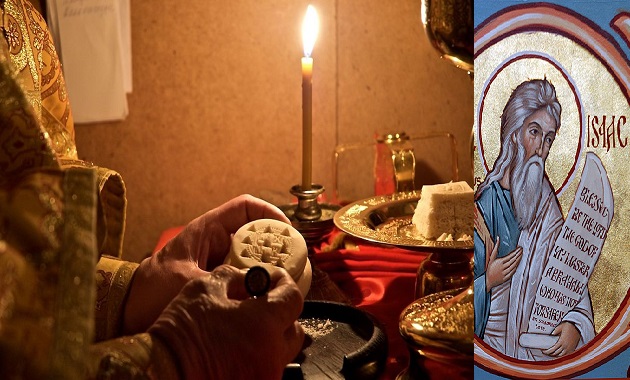 With reference to the sacrifice of Isaac, Saint John Chrysostom initially underlines the fact that Abraham walked with Isaac and two servants for three days, going to a high point, which prefigured Golgotha. When Abraham arrived at the place of the “new and strange” sacrifice, he went on with Isaac. Isaac undertook the task of bringing the wood for the sacrifice, in just the same way as Christ bore His cross on His shoulders to Golgotha. But the sacrifice of Isaac wasn’t completed.  “He did not sacrifice by him by his hand, but by his intention; he did not bury the knife into the neck of the child; he did not cut into his skin, but there was a bloodless sacrifice. Those who are baptized understand what I am saying. This is why the sacrifice was bloodless, because it was a model of that which would take place in the future. Do you see the foreshadowed image in the Old Testament? Do not refuse to believe the truth”[12].

The intervention of God, which came at the critical moment, prevented the completion of the sacrifice of Isaac. The “type” couldn’t be allowed to reach the heights of the Truth. Only on Golgotha would God not send an angel to prevent the sacrifice of His only-begotten Son. And as for Abraham, God was able to confirm, and did so, that he had not withheld his beloved son from Him. Saint Paul also says that, because of His overwhelming love for us, God the Father did not withhold His own Son.

The place of Isaac was taken by a ram which had been caught in a thicket by its horns. The ram caught in the thicket its horns is the Redeemer, hanging upon the horns of the Cross. In a thicket: wearing on His brow a crown of thorns. So when Abraham offered up Isaac then he saw the sheep with its horns caught and sacrificed it, prefiguring the saving Passion[13].

The Epistle to the Hebrews also touches upon another aspect of the sacrifice or Isaac and the Eucharistic Sacrament, the Mystery of the Cross and the Resurrection. It tells us that Abraham was prepared to sacrifice Isaac even though God’s promise depended on the boy. Why did he do this? “He considered that God was able even to raise him from the dead, from which, figuratively speaking, he did receive him back”[14]. The intervention of God transformed the mode of the Cross into that of the Resurrection of His Son. This is why the Lord says Abraham rejoiced at the thought that he would see His own days; he saw them and was glad.

Chrysostom asks how it was possible since he was born so many years earlier: “Through the model”, he replies, “through the shadow. Exactly as the ram was offered in the stead of Isaac, so the rational sheep was offered on behalf of the whole world. Because the truth had to be prefigured in a shadowy form. Note well, my beloved, that all of this had to be prefigured in a nebulous manner. There was an only-begotten son them and an only-begotten Son now. Much loved and real then, beloved and real now. The former was offered as a sacrifice  and the latter was given by the Father to be sacrificed”[15].