Saints, Bollandists, and the Weight of History – and a Commercial Since the Church started its earthly sojourn about two millenia ago, it has waded through a lot of history, and this historical journey has left its mark upon it, for good and for ill.  One of the good things that our historical pilgrimage has given us is a wealth of saintly intercessors, who look down upon us from heaven, a “great cloud of witnesses” (see Heb. 12:1).  Their many names adorn our liturgical celebrations, and at each liturgical dismissal, we not only commemorate the most-holy Theotokos and the holy, glorious and all-laudable apostles, but also our local community’s patron saint and “the saint of the day”.  Pretty much every day on our church calendar has several saints, whose lives we celebrate and upon whose heavenly intercession we rely.  It was, of course, otherwise in the days of St. John Chrysostom, when the commemorations of saints and martyrs were mostly local affairs, with each community celebrating only its local martyrs.  But since the days of Chrysostom the Church has expanded its liturgical horizons, and commemorates not just its own local martyrs and saints, but also those of other communities.  Our heavenly family is very big, and it takes the entire year to remember the names of all the canonized.

Another fruit of such a long historical sojourn is the accretion of legendary material which adorn the stories of the saints.  The “official” Synaxarion (or books containing these stories of the saints) admits as much, for it describes this tradition as “a great river whose rushing waters carry along mud, stones, branches and a little of everything they have met with on their way, regardless of its value, but whose steam is life-giving”[1].  That is, along with the underlying stratum of historically reliable information, the official stories also contain legends and embellishments which are rather less reliable historically.  (A famous example of such colourful embellishment is the dragon in the story of St. George, which a foot-note in said Synaxarion acknowledges is not found in the earliest stories of St. George’s martyrdom.)  What to do with such embellishments?  One approach is that of the Bollandists.

The Bollandist movement began with John Bollandus (hence the name of the movement), a Jesuit who published volumes of saints’ lives at Antwerp in 1643.  These volumes did not simply catalogue all the saints commemorated in the (western) church.  His aim was to “trim away any repetitions, track down any obvious falsehoods” and in general to edit out things which “turn out to be merely fables”.[2]  The work continued after him, with the Bollandists, who continue to research the lives of saints with a great amount of scholarship.  And their work is not of merely academic interest:  when they conclude that a certain saint never actually existed, the Roman Catholic Church drops him or her from its calendar.  If memory serves, St. Christopher suffered such a fate after being put under the Bollandist microscope, despite the many medals bearing his image that the Church sold to its faithful.

As mentioned in the title of this piece, history exerts a fair bit of weight, and centuries of Christian devotion need to be allowed to benefit from that weight.  It is easy—perhaps too easy, given the ever-shifting conclusions of scholars—to excise a saint from the calendar because a group of scholars bring forth negative conclusions.  But such easy excision runs the risk of doing a disservice to the hearts of the faithful.  The hearts and needs of the faithful call us to tread carefully.  Having said that, we should not, I suggest, simply throw out the work of the Bollandists and those like them, and retreat into a kind of historical fundamentalism which confesses that dragons must have existed because a late story of St. George says that he slew one.  This would be to sacrifice much of the Church’s credibility on the world stage, and to tempt unbelievers to say that Orthodox believe in the Resurrection of Christ simply because they are uncritical and gullible.  Adult believers have some sense of history, and of the differences between literary genres.  We can tell the difference between a first century eye-witness account testifying to the resurrection of Christ (see Jn. 21), and a late legend relating how St. George slew a dragon.  The first is clearly history; the second is not, and adult literary palates can easily taste the difference.  We need to deal critically with the lives of the saints, distinguishing the legendary from the historical, yet finding the value to the legends which led to their literary inclusion in the story in the first place.  If one were to refer to this approach as “Bollandist Lite”, I would not object to the designation.  The demands of both scholarship and piety must be consulted as we continue to tell the stories of the saints, the friends of Christ, who are also our friends.

The title of this post referred to “a commercial”, and here it comes.  Noting the pastoral need of producing a synaxarion which attempted to combine the demands of both scholarship and piety, I wrote one (a project which took boldness, since I had neither the sufficient scholarship nor piety for the task).  It was published by Light and Life Publishing in 1997 under the title A Daily Calendar of Saints.  Their proof-reader perhaps could have used some Bollandist attention himself, since his spell-checker “corrected” my work, producing some odd results:  St. Timothy, bishop of Brussa became “St. Timothy, bishop of Prussia”, and Christ, instead of “restoring Peter to the apostolate” after His Resurrection, restored him “to his apostate”.  Oops.  The book sold well even so, given its niche market, and since 1997 has gone out of print.  Also since 1997, a number of saints and holy men and women came to the Church’s attention—women like St. Maria Skobtsova of Paris and new-martyr Fr. Alexander Men of Moscow.  Thus new saints needed to be included in the work, and a number of already-existing stories needed to be expanded.  Also included in the work is an appendix, listing the saints and occasions commemorated in the Paschal cycle.  It has been a labour of love, with encouragement and suggestions from many (including especially my fellow-priest and friend, Fr. Mark Hodges).  The book is available for purchase now, for $17.95, from Lulu.com.  Just go to the Lulu site, and search for A Daily Calendar of Saints, and there it is.

[1] The Synaxarion, by Hieromonk Makarios of Simonos Petra, vol. 1, (Chalkidike: Holy Convent of the Annunciation of Our Lady, 1998), p. xix.

[2] Cited by “Reading the Lives of the Saints” by James Skedros, in Thinking Through Faith, Papanikolaou and Prodromou ed., Crestwood:  SVS Press, 2008, p. 165. 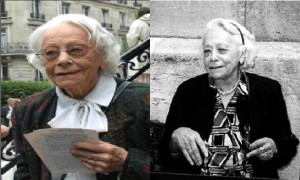 Elisabeth Behr Sigel 26 July 2017 Mme Elisabeth Behr Sigel was, perhaps, the most significant Orthodox woman of the 20th century who delivered the 2003 Florovsky Lecture at Saint Vladimir’s Seminary. She was born in Alsace, France in 1907. Her father was Protestant and her mother Jewish. She studied theology at the Protestant Faculty in Strasbourg and then began a pastoral ministry... 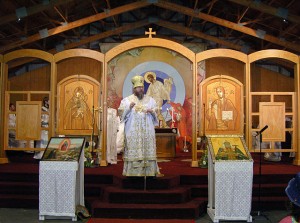 Orthodox Leadership in a Brave New World 22 January 2017 Almost thirty years ago Soviet dissident Alexander Solzhenitsyn delivered an address atHarvardUniversitythat still ranks as one of the most trenchant and inspired critiques of Western culture ever given. Although some of the political references are dated, two observations remain as true today as when they were first spoken. The first is that t... 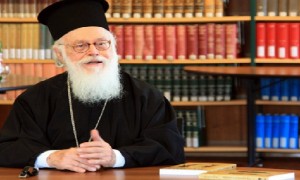 Multi-Faith Europe and Orthodoxy (Part IIΙ) 20 August 2016 3. The problem of the relations between Christians and people of other religions is much more complicated. In general it has two facets. The first is practical: the need to co-exist with people of other religious persuasions. In this case, we have a “dialogue of life” where the only appropriate attitude is one of peaceful co-existence, respect for ... 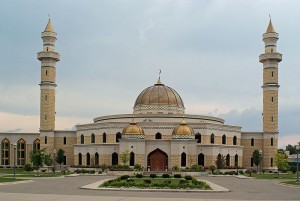 A Western World in Need of Christ 18 August 2016 Mosque in Detroit The western world has entered a period of decadence and decline, departing far from her Christian roots. With the European Union denying the historical and cultural Christian heritage of her member states, a secular based world view reigns dominant. This, together with the mass immigration of peoples from Islamic countries at a ... 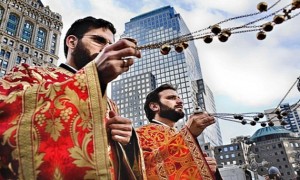 Orthodoxy and the West- Historical Observations and Contemporary Thoughts 17 August 2016 It is commonly agreed that the end of the second millennium after Christ was marked by a succession of events, by unexpected historical changes, which shook even those societies which traditionally had a sense of security and self-sufficiency. It is not possible to tell if people today are entering the historical era of the third millennium with an...