The process and requirements for canonization

Nowadays, the process of declaring saints seems to be the same. (Papadopoulos, Chr., 1934). More specifically, the principles that have to be followed in order that a Saint be recognized are the following;
1. The recognition of his/ her saintliness traits by the Synod.
2. The process above does not have to be applied for those who have already been declared as Saints.
3. During the declaration a relevant ecclesiastical act has to take place.
The action of declaring a saint is signed solemnly in Church, during a suitable ecclesiastical ceremony. The entire Synod arrives in Church, and during the reading of the Gospel, the chorus chants “Blessed you are, Christ, our God…”, “when descending the languages He confused” etc. Afterwards everyone who belongs in the General Synod reads and signs the Act of Sanctification document. In fact, for those Saints who are considered to be more meritorious, a special service is edited. Also, an important part of the process is the translation of the saint’s remains, if this is possible, as well as their Myrrh.
Among the principles above, the most important is the second one, through which it is clear what was the tradition of the Orthodox Church like. The rest elements are either subsequent or casual.
To sum up, the recognition of the people that have been blessed by God and their classification happens relentlessly by the general ecclesiastical conscience. Of course, it is essential that the ecclesiastical principles define the details that have to follow a person’s sanctification process. This does not mean, however, that the ecclesiastical principles can declare a Saint on their own initiation, because this is not something that only affects them, but the entire Church conscience as well. 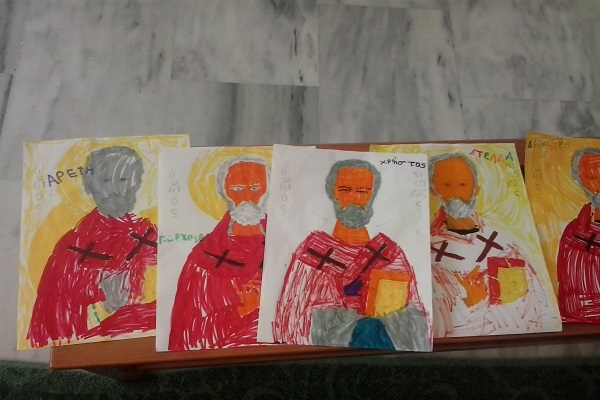 Prerequisites for the declaration

There are three obligatory and two optional prerequisites that must exist in order that a person be declared as a Saint. (Staurianos, K., notes). The obligatory prerequisites are the following ones;
1. This person must have been a member of the Church, he/ she must have been baptized.
2. His/ her religious convictions must have been orthodox.
3. His/ her life must have been devout and full of spiritual radiation, for which virtues it is required to “defy all those passions and the sly thoughts that constitute an obstacle to the human’s communion with God”. (George Tsetsis).
There are also non- obligatory prerequisites that a person may exhibit in order to be declared as a Saint and these are the following ones;
1. He/ She works miracles.
2. His/ her body is indestructible.

Hierarchs are those Saints who used to hold a high position in priesthood and they are a special category of Saints in the Church (http://imverias.blogspot.gr/2013/04/blog-post_7324.html). In the beginning, after the Apostles transmitted the Holy Spirit’s grace to the first Episcopes, they afterwards transmitted it to their successors with the process of ordination. This process is relentless, it continues up to today and it is called apostolic succession. The Hierarchs are the depositaries of the Church’s holy dogmas and they are the fathers of the flock who are in charge of its spiritual edification. St Nikolaos falls into this category of Saints, as he was dedicated to God from a very early age and he helped a lot of poor and indigent people. (http://www.agioritikovima.gr).

Saint Nikolaos was born in 270 Α.D., in Patara of Lycia, and his parents were devout and wealthy. From the very first years of his life he exhibited an aptitude for saintliness and was devoted to God. It is noticeable that he didn’t use to suckle on Wednesdays and on Fridays, as he considered these days to be fasting days. (http://www.saint.gr). He exhibited virtue and zeal in anything that concerned the Christian religion. At the age of 23 he was ordinated as a priest by his High Priest uncle. Then, Nikolaos’ High Priest uncle decided to go to Jerusalem and he nominated Nikolaos as a governor of both his religious throne and the “New Zion” men’s monastery in the region of Myra in Lycia.
So, while his uncle was in Jerusalem, Nikolaos decided to become an eremite in the desert of Ano Thibaida in Egypt. During his journey, Nikolaos saw the vision of an Angel of God asking him to go back. He obeyed, and later, when the Archbishop of Lycia’s Myra was deceased, the episcopes declared Nikolaos as an Archbishop at the age of 31. After undertaking this powerful position, Nikolaos developed intense charity activities. These activities concerned the protection of the poor and the destitute by building hospitals and many other charity institutions, but he also encouraged the Christians that were chased and exiled by the Romans because of their religious beliefs. Taking these facts into consideration it is easily understandable that Nikolaos was characterized by high christian virtues, courage and vitality.
Afterwards, during the Christian persecutions of Dioklitianus, Nikolaos was tortured, like many other Christians. Nonetheless, when Konstantinos the Great became an emperor, all Christians were set free and Nikolaos went back to his religious throne. In 325 A.D. Nikolaos took part in the First Ecumenical Synod in Bithinia and he fought against Arios’ heretic teachings. In fact, it is said that Nikolaos slapped Arios during the Synod, and Konstantinos the Great imprisoned him because of this action. After the end of the Synod, Nikolaos returned to his country and kept on his pastoral work until his death.