On 31 August, the Church celebrates the Deposition of the Precious Belt· of Our Most Holy Lady in the church of the Mother of God of the Khalkoprateia (copper shops) in Constantinople. This church was in a neighbourhood close to a place called Milion, and it was here that the workshops were which belonged to the craftsmen who made and sold copperware, hence the name of the area.

There’s no clear evidence concerning this feast of the Mother of God before the 7th century. In the 6th and 7th centuries, six new feasts were added to the liturgical life of the Church, all of them related to Our Lady: her Conception by Saint Ann, her Nativity, her Entry into the Temple, the Annunciation, Christ’s Reception in the temple by Symeon, and her Dormition. It was the Empress Saint Pulkheria who established the practice of holding a vigil every Wednesday in the church of the copper merchants. The practice was formalized by the Emperor Saint Mavrikios (582-602).

Many traditions have been preserved regarding which emperor was responsible for bringing the Precious Belt of the Mother of God from Jerusalem to Constantinople and when. The one closest to the truth, however, attributes the initiative to the Emperor Arkadios (395-408). Arkadios was the son of Theodosios the Great and the father of the Emperor and Saint Theodosios II (408-450) and of Pulkheria (450-457). He not only took the Precious Belt to Constantinople, but also placed it in a beautiful reliquary, which he called the ‘holy coffin’. The church of the copper merchants, where the Precious Belt was deposited, was built a few years later by the Empress Pulkheria. 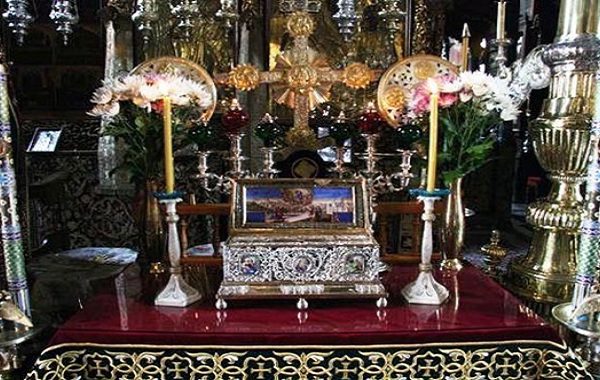 Many miraculous events occurred in this church which confirmed the wonder-working power of the Holy Belt. The Patriarch of Constantinople, Saint Yermanos I (715-730), in a sermon he gave at the feast of the Deposition of the Precious Belt in the church of the copper merchants, lyrically declared that the Belt eternally retains the divine fragrance of the cures it has effected, bringing joy to those who approach it with faith and reverence.

In the canon which he dedicated to the Precious Belt of the Mother of God, Saint Iosif the Hymnographer (ca. 818-886), praises the holy relic which, by the grace of Our Lady sanctifies the faithful who approach with all due reverence in order to venerate it, which raises them out of corruption and delivers them from sickness and sorrow. The Precious Belt is like a sparkling spring, pouring out a torrent of healing.

A whole host of believers, irrespective of sex, age, occupation or social standing, flocked to the church of the copper merchants in order to venerate the Precious Belt of Our Lady and to ask of her who is full of grace to intercede with the Lord. ‘Who shall speak of your magnificence?’, cried Saint Efthymios, later Patriarch of Constantinople (907-912).

A certain Ilias, a priest and steward of the church of the Holy Wisdom of God (Ayia Sofia), speaks, in a narrative dating from 843, about a miracle that involved a child in the church of the Mother of God of the copper merchants. The miracle occurred in about 800, during the tenure of Saint Tarasios as Patriarch of Constantinople (784-806) and has survived in written form. At the time, Ilias was a child and was present as an eye-witness at the miraculous event. When he was in church one day, he saw a child going through to the school of the copper merchants, which had a shared entrance with the church. As he was walking, he looked at the icon of the Mother of God which had been destroyed at the time of iconoclasm by Konstantinos V, but had been repainted on the instructions of Patriarch Tarasios.

The little boy was dazzled by its brilliance and went on his way, but kept looking upwards. As a result, he fell into a well which was on the south side of the church. A ‘concierge’ who happened to be there at the time in the chapel of the ‘Holy Coffin’ heard the noise and asked some old women who were sitting there what the splash was that he’d heard. But they hadn’t heard anything. All they’d seen was the boy walking through the church. The concierge, who’d thought that the noise had come from water being disturbed, realized what had happened. He went down into the well and found the boy floating on the surface. He brought him out of the well and everyone noticed something strange and wonderful. Not only had the boy not come to any harm, but he wasn’t even wet.

Obviously, the grace of the Mother of God had protected him. He explained to them that Our Lady had held him on one arm, with Christ on the other, and had told him not to worry because she was protecting him. As he related this, a divine light and radiance spread all around. Everyone believed the words of the boy because he was only little and was innocent. His soul was still so pure that he wouldn’t have told lies nor pretended about anything. When he looked at the icon, the boy shed tears of joy and glorified the Lord and His Mother, because he’d been allowed to see the light of their glory at first hand.

The gratitude of the boy, as well as of his widowed mother, were beyond description. When Patriarch Tarasios was informed of the miraculous event, he celebrated a festal Divine Liturgy in the church of the copper merchants. He also dedicated the child to God, guaranteed the expenses for his education and paid for his care and that of his mother.

Note: the article is a fragment from an unpublished post-graduate dissertation by the author (1998).