Communion & Division – The Structure of Knowledge: God Sent Forth the Spirit 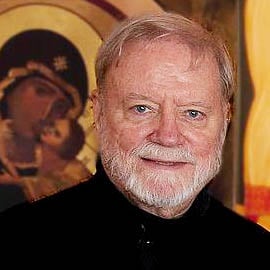 We come now to God’s revelation to us in the Holy Spirit. For the purpose of this inquiry, it is neither possible nor necessary to examine this theme in all its amplitude, for Holy Scripture tells a good many things about the mission of the Holy Spirit. I propose, rather, to consider the mission under one aspect only. Namely—the Holy Spirit’s transformation of man’s knowledge, a theme developed in both the Pauline and Johannine sources of the New Testament.

We may begin with St. Paul, who addresses this matter in the Epistle to the Romans, in a passage strikingly similar to the Galatians text that we have already seen: “For you did not receive the spirit of bondage again to fear, but you received the Spirit of sonship, by whom we cry out ‘Abba, Father.’ The Spirit himself bears joint witness to our spirit that we are children of God” (8:15f). We observe in this text that the Holy Spirit bears witness, not only to who God is, but also to who we are—not only to God as Father, but also to us as his children. The Holy Spirit testifies, not only that something is so, but also thatSomeone is such-and-such in regard to us, and we in regard to him. It is the personal knowledge of the relationship between God and ourselves. We now know God, because we now stand in a different relationship to God as his children.

Likewise in the Corinthian literature, St. Paul speaks of the wisdom conferred by the Holy Spirit. Thus, of those things that the eye has not seen and the ear has not heard, he says, “God has revealed them to us through his Spirit. For the Spirit searches all things, even the deep things of God. . . . Even so, no one knows the things of God except the Spirit of God. Now we have received, not the spirit of the world, but the Spirit which is from God, that we might know the things that have been freely given to us by God. These things we also speak, not in words which man’s wisdom teaches, but which the Holy Spirit teaches . . .” (1 Cor. 2:9–13).

This instruction of the Holy Spirit is directed to the person and activity of God’s Son, Jesus Christ. It is the Holy Spirit that gives “the light of the knowledge of the glory of God in the face of Jesus Christ” (2 Cor. 4:6), so that “we all, with unveiled face, beholding as in a mirror the glory of the Lord, are being transformed into the same icon from glory to glory, as by the Lord of the Spirit (apo kyriou pneumatos)” (3:18). This is the meaning of Paul’s assertion that “no one can say ‘Jesus is Lord’ except by the Holy Spirit” (1 Cor. 12:3). The Holy Spirit not only tells us to proclaim “Jesus is Lord,” he also grants us the vision to see the glory of that lordship. We proclaim only what we see.

Of this witness given us by the Holy Spirit St. Paul had already written in the very first chapter of the earliest of his epistles: “For our gospel did not come to you in word only, but also in power and in the Holy Spirit, and in complete certainty (plerophoria polle)” (1 Thess. 1:5). In context, this expression descriptive of Christian knowledge, “plerophoria polle,” is contrasted with “in word only.” That is to say, this “complete certainty” in the Holy Spirit is not described as information about but as knowledge of. It is not merely referential; it is real, not only notional. It is not merely nominal (“in word only”). It consists, not simply in discerning the meaning of the words proclaimed, but in perceiving the truth of that meaning. It is not simply an assent to what is declared, but the reality of what is perceived. “Plerophoria polle” is the knowledge of the truth of the gospel. It is not nominal information about, but real knowledge of, the true God.

A later text in the Pauline corpus perhaps renders this meaning of “complete certainty” even clearer. In Colossians 2:2 the apostle speaks of our attaining to “all wealth of the certainty of the understanding, the knowledge of the mystery of God, Christ, in whom are hidden all the treasures of wisdom and knowledge.”

Before going on to look at the treatment of this theme in St. John, we may take note of another early use of the word plerophoria, the certainty given by the Holy Spirit, in a disciple of St. Paul, St. Clement of Rome. I cite this text as a very early exegesis of Pauline theology. About the year 95, Clement, writing to the church at Corinth, used both the pertinent noun and the passive participle of its cognate verb in a single sentence: “The apostles, having received their orders and filled with certainty (plerophorethentes) through the resurrection of our Lord Jesus Christ, and entrusted with the Word of God, went forth with the certainty of the Holy Spirit (meta plerophorias pneumatos hagiou), preaching the good news that God’s Kingdom was to come” (Ad Corinthios 42.3). What is perhaps most striking about this text is that the “certainty” of the apostles is described as being conferred both outwardly and inwardly. That is to say, this plerophoria is related to two orders of knowledge, to both the categorical, empirical order—in the historical event of the resurrection of Christ—and the internal order of immediate perception—the gift of the Holy Spirit. These are the two dimensions of the knowledge of God with which we are concerned. These are the two inseparable aspects of the gospel, the sending of the Son and the sending of the Holy Spirit.

We come now to this same theme—the knowledge given by the Holy Spirit—in the writings of the Apostle John. It is in John’s Gospel that the Holy Spirit is called the “Spirit of truth” (14:17), who will teach us all things (14:26). In John’s First Epistle, likewise, we are told, of God, that “by this we know that he abides in us, by the Spirit that he has given to us” (3:24). And again, “By this we know that we abide in him, and he in us, because he has given us of his Spirit” (4:13). This Holy Spirit, the inner witness to God’s people, is described by John as the Anointing. He writes: “You have an Anointing from the Holy One, and you all know” (2:20). And again, “But the Anointing that you have received from him abides in you, and you do not need that anyone teach you; but as his Anointing teaches you concerning all things, and is truth, and is no lie, and just as he has taught you, abide in him” (2:27).

Lest we misunderstand this text, I submit that there are two comments to be made about John’s teaching on this immediate witness of the Holy Spirit. First, it should not be taken as an affirmation of the individual conscience. In every instance where John refers to Christians being taught by the Holy Spirit, the nouns and verbs are invariably plural. That is to say, it is the Church, the worshipping and confessing body of true believers, that receives the Anointing. For this reason, it is always possible for an individual Christian to be deceived with respect to the witness of the Holy Spirit. Indeed, John’s First Epistle deals explicitly with that possibility.

Consequently, and second, individual claims made as manifestations of this Anointing are to be put to the test. Thus John tells us, “Try the spirits to see whether they be of God” (4:1). In this respect there is, in particular, a doctrinal test, because the inner, immediate knowledge conferred by the Holy Spirit is inseparable from the external, historical knowledge transmitted through the proclamation of the gospel. This testing of the spirits, then, has a specific reference to the linear tradition of the apostolic witness. Thus, John writes, “By this you know the Spirit of God: Every spirit that confesses that Jesus Christ is come in the flesh is of God, and every spirit that does not confess that Jesus Christ has come in the flesh is not of God” (4:2f). That is to say, John recognizes no independent spiritual knowledge of God separable from his revelation in the historical Jesus Christ.

Though the Holy Spirit blows where he wills, he is not a free-floating spirit. He is the “Spirit of Jesus Christ” (Phil. 1:19; cf. Rom. 8:9). His true presence can be discerned precisely by what he causes us to know, and prompts us to affirm, with respect to the Son and to the Father who sent that Son. Namely, “Jesus is Lord” (1 Cor. 12:3), and “Abba, Father” (Rom. 8:15; Gal. 4:6). These are the two essential affirmations of the Holy Spirit. This Anointing has relatively little to say of himself, but in him we know “there is one God, the Father, of whom are all things, and we unto him, and one Lord, Jesus Christ, through whom are all things, and we through him” (1 Cor. 8:6). The Holy Sprit thus points the believer in two directions: toward the earthly, empirical, external realm of historical activity, where Jesus Christ “was delivered up for our offenses and was raised for our justification” (Rom. 4:25), and toward the inner and eternal realm of transcendent mystery, where the Father abides in the unapproachable light. 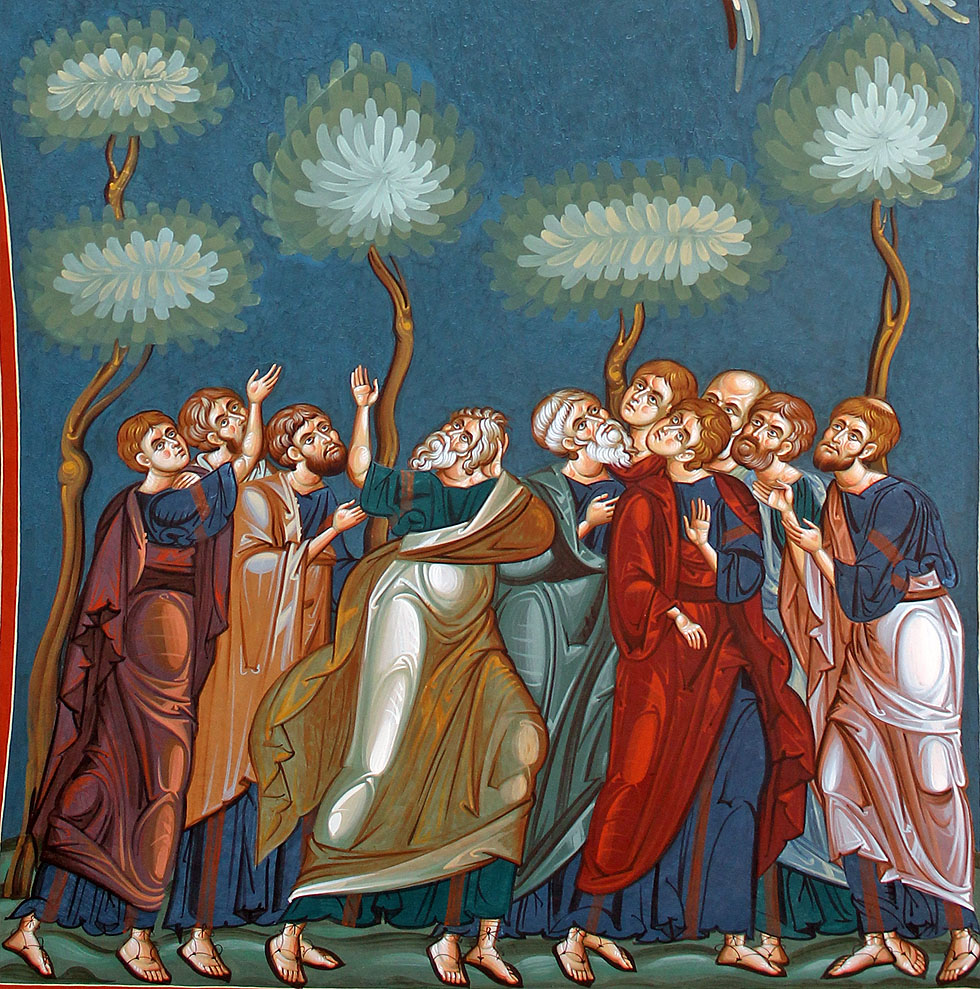 The Ascension of the Lord, fresco by hand of Sorin Efros,

Patrick Henry Reardon is pastor of All Saints Antiochian Orthodox Church in Chicago, Illinois. He is the author of Christ in the Psalms, Christ in His Saints, and The Trial of Job (all from Conciliar Press). He is a senior editor of Touchstone.