How the monks on the Holy Mountain make kollyva

Separate memorial services are not held for monks on the Holy Mountain. Together with the kollyva for the Saint, a small saucer of kollyva is prepared for the departed. Abbots over the last 100 years are commemorated, as are priest and monks over the last thirty. Kollyva is made every time an icon is put on display in the church to be venerated. Every Saturday, however, there is always a service for the departed, with kollyva, unless it coincides with the handing back of a feast of the Lord. The kollyva here is a little boiled wheat on a tin plate, which is placed under the icon of Christ. 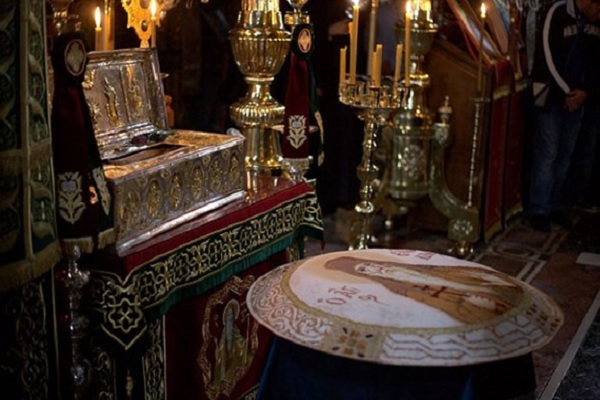 The kollyva for a feast requires genuine patisserie skills. On the surface, there is usually an icon of the founder of the Monastery or the saint after whom the central church is named. So w have, for example, Saint Athanasios the Athonite at the Great Lavra; and the Honourable Forerunner, Saint John the Baptist, at the Monastery of Dionysiou. These depictions are made with coloured sugar and are real works of art, which, alas, are later destroyed when the kollyva is distributed and eaten.
Ordinary kollyva is made as follows. Wheat is pounded and then placed in water in order to swell. It is then boiled in cold water. After half an hour, the water is poured off, fresh is added and boiled until the wheat opens up and the liquid thickens. A little salt is added. Afterwards the liquid is used as a drink, flavoured with sugar and cinnamon. The wheat is then washed in cold water to get rid of the starch and it is spread out to dry. Two or three hours before the Divine Liturgy, the monk responsible throws a handful of dried, finely-ground breadcrumbs into the kollyva to soak up any moisture, so that the wheat will be completely dry. The mixture is later sieved in order to get rid of the bread crumbs. The wheat is now ready and if desired, can at this stage be mixed with crushed hazelnuts. It is spread out, covered with sugar (not icing sugar, but normal crystalline) and a cross is made on it with sugar coloured with cinnamon. 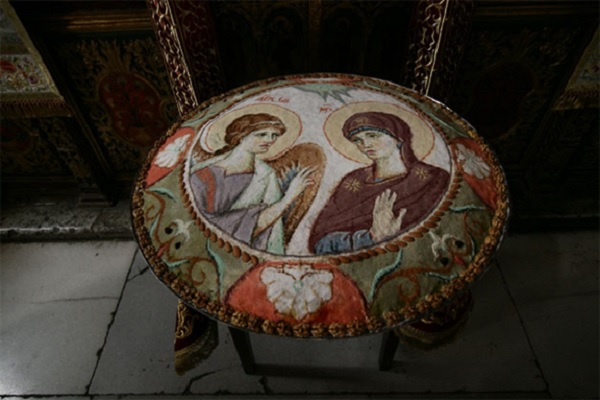 The kollyva for a feast has chopped walnuts added, as well as powdered cloves and cumin. In some monasteries finely-ground hazelnuts are substituted for the chopped walnuts and cinnamon for the cloves.
The depictions of the saints are produced in a remarkable way. With either a matchstick or the wooden end of a fine paint brush, the outline is imprinted on the sugar through an anthivolo (a working sketch, matrix or ‘crib’, which was standard equipment for Late and Post-Byzantine artists (WJL). Now the clothes, face and hair can be filled in with differently coloured sugars. Sometimes sugared almonds are added or little, edible silver balls (drageés).
Normal kollyva is the everyday dessert for monks in coenobitic monasteries. On the Holy Mountain, the Russians usually make their kollyva with rice rather than wheat, as they do in Russia itself. This is the case not only in the Russian monastery of Saint Panteleïmon, but also in the Russian sketes and kellia.