Icons of the Theotokos: The “Milk-Giver” of the Hilandar Monastery on Mt. Athos 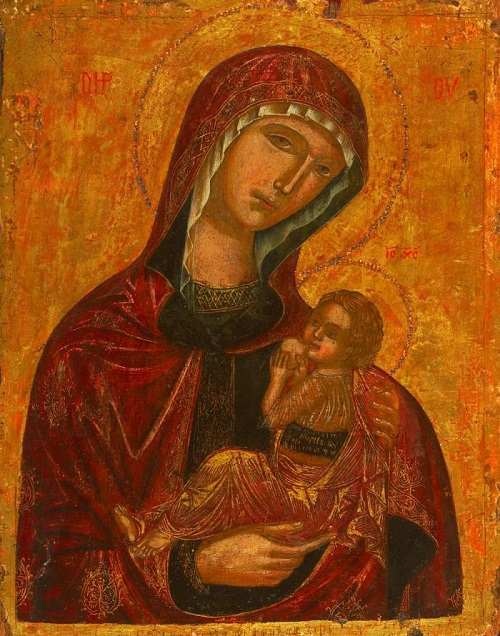 Today’s icon dates as far back as the 6th century, residing in the monastic community of St. Sava (or Sabbas) in Jerusalem. Shortly before his death, the saint prophesied that a royal visitor bearing his name would visit the lavra. The Saint instructed his brothers to give the visitor the icon of “The Milk-Giver” and St. Savas’ personal staff.

It took 700 years, but a Serbian prince named Rastko Nemanjić, who had taken the monastic name of Sava arrived at the lavra. Coming to venerate the relics of the elder Sava, the saint’s staff fell at the younger Sava’s feet. Learning of the young pilgrim’s name and remembering the centuries’ old prophecy, the monks gave him the staff, the Galaktotrophousa icon, that is, the “Milk-Giver”, as well as another icon.

This unique icon arose in response to an ancient theological heresy that stated Christ’s divine nature “absorbed” his human nature. Unable to believe that God Himself would condescend to go through the physical processes of birth, these Monophysites (Monophysite means “one nature”) instead proposed that Christ’s physical body was incorruptible, and therefore, not human.

It is easy to see then how this icon of Christ, suckling at his human mother’s breast was a startling rebuke to this opinion and today, it may very well still be surprising to a society which continues to hide the natural functions of the body as shameful. Its power however, and its message still remains: Christ is both fully human and fully divine.

All the items that the Serbian St. Sava received were kept safely in the Hilander monastery on Mt. Athos, where the Milk-Giver icon still resides as part of its iconostasis.

The Milk-Giver icon is celebrated on July 3, and again on January 12.