In the synaxarion for Saint James (October 23), we’re told that, like Saint John the Baptist, “he never ate anything that had had the breath of life within it”. Yet we’re also told that John ate locusts. Even if he was, as some believe, as Nazirite, he could have eaten locusts, since they are the only insect sanctioned for human consumption in the Jewish dietary laws (Leviticus 11,12). And locusts do, indeed, flourish in and around Israel. On March 21, 2013, the BBC reported that Israel was “in the grip of a locust invasion”, and that Israelis were making the most of this by deep-frying the insects or covering them in chocolate. The problem is that this was an “invasion”. Under normal circumstances there aren’t enough of them around to sustain a person. 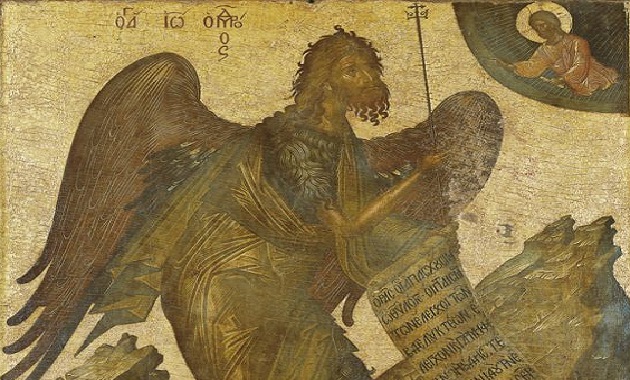 There are several possibilities here. In the first place, God’s providence: He Who provided manna for the children of Israel in the desert and caused the ravens to feed Elijah can order things as He pleases, including enough locusts to feed Saint John. Or perhaps Saint John was in the desert for relatively short periods and lived on locusts and wild honey when he was there. Then again, the Shemot Rabbah, the midrash to Exodus, hints that the preferred way to eat them was to pickle them, so he may have taken a supply of preserved locusts with him. This does not, however, resolve the problem of the statement in the synaxarion that “he never ate anything that had had the breath of life within it”.

There is, however, another possibility. The leguminous evergreen tree Ceratonia siliqua, the carob, is a member of the pulse family and is native to the Eastern Mediterranean, where it flourishes even in deserts. In ancient times, flour was made from its fruit, rather in the same way as chick-pea flour is made in India. Indeed, there has recently been a revival of interest in these ancient flours because they are useful in a gluten-free diet. The carob is also known as “the locust-tree” and fruit in its pods as “locusts” and also “Saint John’s bread”. Obviously, this tradition starts with the assumption that Saint John derived his sustenance from this tree. How likely would that have been?

In Greek, it is not uncommon, because of dialectal differences, for ‘a’ and ‘e’ to be represented in words of similar meaning. Thus, in Ancient Greek ἐχῖνος meant ‘hedgehog’ and in Modern Greek αχινός means sea-urchin. The word for locust in Ancient Greek was ‘akrida’ but there is another word, rather similar to it ‘egkrida’. If you look up Augustus Meineke’s Fragmenta comicorum Graecorum (p. 426) you will find an entry on egkrida: Ἐγκρίδες: πεμμάτιον ἑψόμενον ἐν ἐλαίῳ καὶ μετὰ τοῦτο μελιτούμενον (“ a little cake baked in oil and then honeyed”). These are mentioned in Stesichorus (7th-6th centuries BC), and Aristophanes also mentions an ἐνγκριδοπώλην (a vendor of cakes). So cakes which were commonly made of carob flour and were cheap food for the poor were well-known in antiquity throughout the Eastern Mediterranean. Could it be that Saint John actually took with him a supply of- dried?- cakes, which he then ate with wild honey, rather than pickled or fresh locusts? Or perhaps, just to complicate matters, he actually ate both!