Almost always, Matins for the day is sung before the Divine Liturgy, though a few times we sing Vespers instead. While Matins is being sung – it consists mostly of hymns and psalms sung by the choir- the celebrant prepares himself, that is, he puts on his vestments, and says certain prayers with which he asks God to make him worthy to celebrate the dread sacrament and for the Lord Himself to come, as the only Great High Priest, to celebrate the sacrament, accompanied and glorified by the ranks of the angels. The celebrant washes his hands to show that he’s undertaking this sacred task clean in body and soul.

Then it’s time for the Proskomidi, that is the preparation of the precious gifts. This, too, takes place during Matins, at a table to the left of the sanctuary. This place, the Prothesi, symbolizes the cave of Christ’s Nativity at Bethlehem, so we often see an icon of the Nativity there. It also symbolizes Christ’s Passion, however, so we may see an icon of the ‘Utter Humiliation’ of the Lord. At the preparation table the priest performs the following actions:

He cuts the central, square portion from the church bread and places it in the middle of the paten This portion is called the Lamb and symbolizes Christ Who was led to the slaughter. 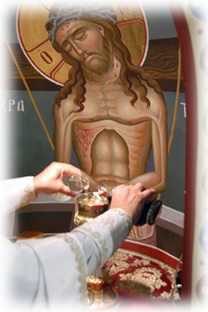 He pours the communion wine and some water into the chalice.

Then he places other portions of the bread next to the Lamb, in honour of the Mother of God on the right and the saints on the left..

He also takes out pieces for the faithful, living and departed, remembering their names as he does so, and for himself, placing them all on the paten, as can be seen in the left of the two pictures above. This why we write a list of names on a piece of paper when we go to church for the Liturgy, these being people close to us who are still alive or have passed on: so that the priest can remember them and place small pieces for them on the paten. In this way, we all become One Body with the Lamb, that is, with Christ. There’s no need to give any money together with the list of names. We don’t pay for prayers or sacraments. 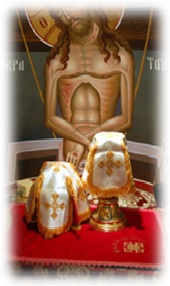 He covers the sacred vessels with special covers and censes them. 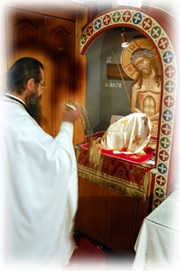 The priest accompanies all his actions with certain prayers or verses from Holy Scripture which are directly related to what he’s doing. Finally, he says a prayer called the Preparation Prayer and censes the Holy Altar, the preparation table, the icons and, from the Royal Doors, the congregation. In this way the preparation of the priest and of the precious gifts is completed. In the meantime, the choir has finished Matins and everyone, priest and people, are ready for the Divine Liturgy.