The Instruction of Vladimir Monomakh (Part I)

The other day, March 19,  I read an article entitled Ολίγη Σοβαρότης δεν Βλάπτει (“There’s no Harm in a Little Seriousness”) about a senior politician giving an interview about how, since childhood, he’d been a fan of the best-supported football team in Greece. The author of the article suspected that the timing of the interview may have something to do with the forthcoming elections. This sent me to my books, one of which took me back to my days as an undergraduate at Oxford. It’s called A Historical Russian Reader and is an anthology put together by two of my then professors, John Fennell and Dimitri Obolensky, whom I was fortunate enough to get to know quite well through the Russian parish. The reason I had the book was because it contains a text which had been ‘set’ as part of the course, the Поучение (Instruction) of Vladimir Monomakh to his children. (O tempora, o mores, there is now a video available at http://www.youtube.com/watch?v=SdOf-Vd4Jqw). 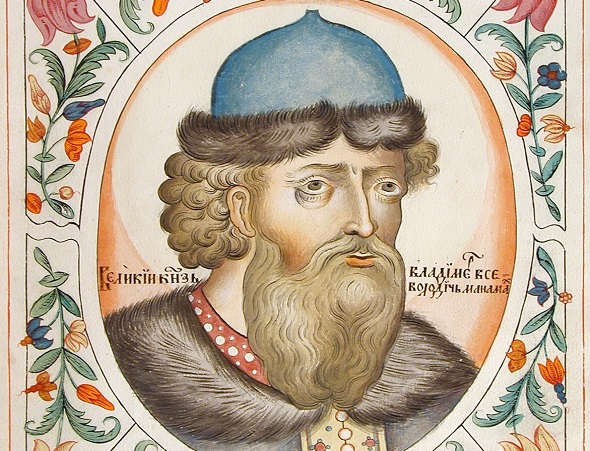 We live in a time when political discourse consists of “sound bites” and when preparation for high government office seems to consist of acquiring a degree and going straight into the political system after university. One is tempted to say, “Well, ’twas probably ever thus”, but was it? British political life at the end of the 19th century, for example, was dominated by Gladstone and Disraeli. Gladstone’s favourite reading was the Greek fathers, particularly Saint John Chrysostom, in the original, and Disraeli was a rather distinguished man of letters, who once said that if he wanted to read a good novel, he would write it. In America, Benjamin Franklin was an author, printer, political theorist, politician, postmaster, scientist, inventor, statesman, and diplomat, as well as being one of the Founding Fathers. In Greece, the first Governor, Ioannis Capodistrias was awarded Swiss citizenship for his outstanding service to that country and also served as Foreign Minister to the Tsar of Russia. Another such was Vladimir Monomakh.

Vladimir (1053-1125) was Velikiy Kniaz of Kievan Rus’, who had family ties to the ruling family in Byzantium and was married to the daughter of Harold Godwinson, the last Anglo-Saxon King of England. He begins by saying that he was seated on his sled or sleigh and this is generally taken to mean that he was writing in his declining years. What is striking in the text is precisely the gravitas of the author and his obvious commitment to the Orthodox view of the role of a prince: not the divine right of the kings of the West, but a steward placed in a position of trust by God, with the obligation to hand on to the next generation his fief and his wisdom.

“… As I sat upon my sleigh, I meditated in my heart and praised God, who has led me, sinner that I am, to this day. Let my sons or whoever else happens to read this brief discourse laugh at its contents [if they so choose]. But rather may any of my sons who takes my words to heart and is not disposed to laziness behave as I advise.…

First, for the sake of God and your own soul, keep the fear of God in your hearts, and give alms unstintingly, because this is the root of all good…

The dayspring of fasting will shine forth, as will the light of repentance, so let us purify ourselves, brethren, from every corporal and spiritual blemish, and, as we call upon the Light-Giving Creator, let us say, ‘Glory to You Who love humankind!’.

In truth, my children, understand how merciful, how supremely merciful is God, Who loves humankind. We humans are so sinful and worldly that, if people do us evil, we desire to destroy them at once and shed their blood. But our Lord, the ruler of life and death, allows our sins to be even higher than our heads, and yet He loves us all our lives, as a father loves his son whom he chastens and then summons once more to embrace. Thus our Lord has promised us the victory over our enemies through three means of conquering and overcoming them: repentance, tears, and almsgiving. My children, the commandment of God to conquer your sins by these three means is not severe.

But I implore you for God’s sake, don’t be remiss; don’t forget these three means. It’s not difficult to achieve them. You can obtain the mercy of God through these easy efforts, not through solitude nor an ascetic life, nor by such fasting as other good men endure….

As you read these words, my sons, praise God that He’s shown us His mercy and has admonished you through my poor understanding. Listen to me, and at least accept the half, if you aren’t disposed to adopt it all.

When God softens your hearts, shed tears for your sins, and pray, ‘As you took pity on the adulteress, the robber and the publican, have pity also upon us sinners’, and utter these words both in the church and before you retire to rest. If it’s in any way possible, don’t fail even for a single night to prostrate yourselves [“and if you can’t, at least thrice”? It appears that the text is deficient here. Perhaps it means that if you can’t make prostrations, at least say Kyrie eleison three times]. Don’t forget or be remiss in this observance, because by his nightly worship and hymns a man conquers the devil, and by this means expiates what sins he’s committed during the day. When you’re riding out on your horse, if you have no special subject of conversation with a companion and no other prayer to pray, then say to yourselves, all the time, ‘Kyrie eleison’. This is the best prayer of all, and infinitely better than thinking evil thoughts.