The Woman who Dwelt in a Cave – Part I

A saintly hermit told the brothers the following story:

One day, as I was sitting in the desert, I began to feel worried and sad. A thought came to me: “Get up and go for a walk in the desert”. So I walked and came to a water-course and gazing into the distance in the moonlight- night had fallen already- I saw something hirsute sitting on a rock. At first I thought it was a lion and stopped walking in that direction. But then I thought it over and realized that, even if it were a lion, I shouldn’t be afraid, but rather should take courage and believe in the grace of Christ. So I started off again, heading towards the rock. Near the rock there was a small hole. No sooner did the figure see me approaching in the distance than it sprang up and disappeared into the cave. 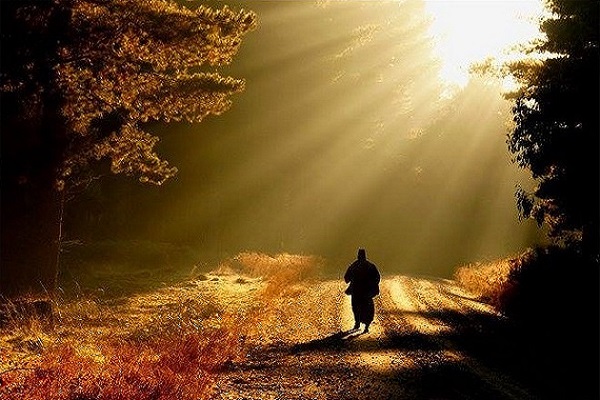 When I got to the rock, I found a basket with some beans and a pitcher full of water, so I realized that the figure must have been a person, rather than a lion. So I went up to the opening of the cave and shouted: “Servant of God, please, do me a favour and come out and bless me”. No answer. I insisted that whoever it was should come out and give me a blessing, but the reply came: “Forgive me, Elder, but I can’t come out”. When I asked why, I received the answer: “Forgive me, but I’m a woman and quite naked”. When I heard this, I immediately took off the cloak I was wearing, wrapped it up and threw it into the cave. “Take this clothing, put it on and come out, please”. She did so. As soon as she came out, we said the usual prayer and sat down. Then I implored her: “Do me the favour, mother Elder, of telling me how you came to this place, how you spend your time here and how you found this cave”.

Then she began to tell me her life story:

“I was a ‘canonical’, she said [that is a woman dedicated to the Church but not tonsured as a nun], ‘and had dedicated my life to the church of the Resurrection of Christ. But where I used to perform this duty, there was a monk, who had his cell near the gate. This monk started to become familiar and seemed very pleased to be in my company or to speak with me. On one occasion I overheard him weeping and confessing this sinful inclination to God. I knocked on the door, and, when he realized it was me, he didn’t open it. Instead, he continued weeping and confessing to God. When I saw this, I said to myself: ‘Here’s this man repenting his own sin, but I’m unrepentant. He’s repenting and bewailing his transgression, so how can I remain like this, without the attire of mourning within me’.

So I immediately took the decision. I went back to my cell, put on an old and worn piece of clothing, filled my basket with beans and my jar with water. I went into the church of the Resurrection and made a prayer: ‘You, Lord, Who are our great and wonderful God, you Who came to earth to save the lost and raise the fallen, You who hearken to all those who sincerely ask Your assistance, show Your compassion and mercy to me, too, sinner that I am. And if it’s your good pleasure to accept my return and the repentance of my soul, bless these beans and this water, so that they’ll suffice for all the years of my life, so that I won’t be distracted- with the excuse of seeing to the needs of the flesh and the body- from continuous worship’.

Then I went to Golgotha and made the same prayer. I embraced the holy rock and the sacred vessels and again called upon the holy name of God. Then, in total secrecy, I left and, with complete confidence, gave myself into the hands of God. I went down to Jerusalem, crossed the Jordan and took the road that led to the bank of the Dead Sea. I’d never seen the sea-level so high. So I went up into the mountains and wandered in the desert until I came to this water-course. I climbed up onto the rock and found this cave. Since then I’ve come to love this place very much. I like to think that God gave it to me so that I could truly repent. I’ve lived here for thirty years and have never set eyes on another person, apart from you today.

And the beans in my basket and the water in my jar have never run out to this day, even though I’ve eaten and drunk as much as necessary. Of course, as time passed, my first clothes wore out and fell to pieces, but as my hair grew and got longer, I covered myself with it as if it were clothing. And so, by the grace of Christ, neither the cold nor the heat, even the furnace of the summer, do me any harm’.