Archbishop Anastasios of Albania talks about peace in the Middle East

Conscious acceptance of religious and cultural pluralism and peaceful co-existence between different communities can come about from two opposing starting-points.* Either from indifference to religious faith or from conscience experience of religion. On the other hand, religious intolerance between co-existing religious communities may develop from: a) seeds of a religious nature, such as, for example, extreme fanaticism; or b) non-religious roots, such as political or nationalist factors which use religion for other purposes. All these factors continue to be powerful in the Middle East region.
Be that as it may, people still anxiously desire world peace. So any attempt to study and deal with this multi-faceted problem is a valuable contribution. As an introduction, allow me, briefly, to note three points. 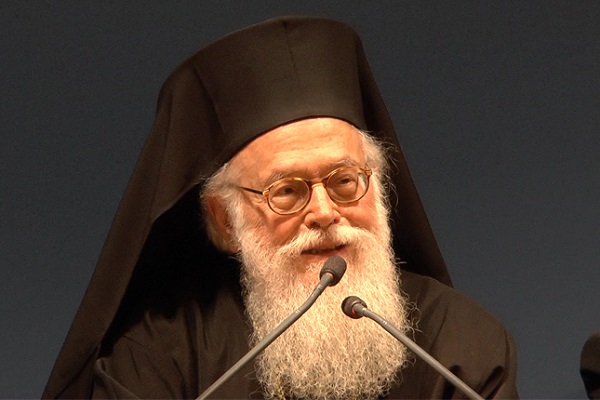 1. It is my personal belief that the cultivation of a healthy religious conscience is the most stable foundation for peaceful coexistence. Not religious indifference.
In the monotheist religions which dominate the Middle East we see: a) a search for inner peace; b) a curb on hostility; c) the principles of peaceful coexistence; d) the desire for peaceful relations with God; and e) encouragement to maintain peace with all humankind. Christians in particular look to the God of Peace, and seek His intervention.
We who hold responsible positions in religious communities have a duty to develop a peaceful theology and anthropology, drawing upon the wealth of our religious principles and the best pages of our traditions. In particular, we are called upon to castigate any form of violence. We must emphasize that it is incumbent upon everyone to respect the religious freedom of others. Violence in the name of religion violates the essence of religion. Every crime committed in the name of religion is a crime against religion itself. No-one has the right to use the oil of religion to fuel the fire of conflicts. Religion is a divine gift, which soothes our hearts, heals our wounds and brings individuals and peoples closer together.
2. Peace is linked directly to justice. An unjust world cannot be a peaceful one. A clear rule in the Old Testament is: ‘To act justly and to speak the truth is more pleasing to God than the blood of sacrifices’ (Prov. 21, 3). In this century, peace and justice have acquired another synonym: development. Poverty remains the worst form of violence. When people are deprived of the elementary means of survival, it is no wonder that they turn to other directions and adopt extreme religious views in order to achieve a just society.
Obviously, there is a more general responsibility on the part of the great powers for the crises in the Middle East. Decisions on violent regime and leadership changes, arms sales, and indifference to collateral damage have resulted in the loss of millions of innocent lives and waves of refugees, pollution of the environment, and the destruction of cultural monuments of rare value. The time has come for those responsible to cast off their lethargy and to act urgently and effectively to stop this terrible bloodshed.
Peace and security will be established as a result of concern for social justice and for the development of the poorest societies on the planet. It would be a tragic political mistake if, through negligence or disdain, we were to allow a new, polymorphous proletariat to develop which would misappropriate the spiritual ‘atomic energy’ of a religious tradition.
3. Finally, the opposite of peace is not exactly war, but self-absorption, be it individual, collective, national or racial. This is employed in the service of various forms of violence which kill off peaceful co-existence in a variety of ways This is the inspiration and fuel for small and large conflicts and constantly renews hatred.
The antidote to egocentrism is not generalized advice, nor various laws or state mechanisms for its suppression; it is rather the reinforcement of love within society. A multi-dimensional, practical love which is not restricted by borders, prejudices or any kind of discrimination. Herein lies the enormous potential and contribution of a healthy religious conscience. Even in situations of intractable conflicts, it provides the power of forgiveness and reconciliation. It is, in the end, the power of love that can overcome the love of power, which is what constantly destroys peace. The inexhaustible source of love is and remains the truth, which Saint John the Evangelist described in the most concise and moving manner: ‘God is love. Those who dwell in love dwell in God and God dwells in them’. (I Jn. 4, 16).
I hope, with all my heart, that through the papers, discussions and more general reflections of our conference we can draw valuable material for a fuller investigation of the crucial issue with which we are concerned. And that we can continue with greater enthusiasm to be workers for peace, in the certainty that the ceaseless struggle for peace, justice and solidarity is the most substantive and valuable thing that can be offered for the survival and cultural development of the Middle East.

*The text is the address by His Beatitude Anastasios, Archbishop of Tirana, Durrës and All Albania to the International Conference in Athens on the subject of ‘Religious and Cultural Pluralism and Peaceful Coexistence in the Middle East’ which was held in Athens from 18 to 20 October 2015.