Determining Sainthood: The Roman Catholic Method and the Orthodox Way 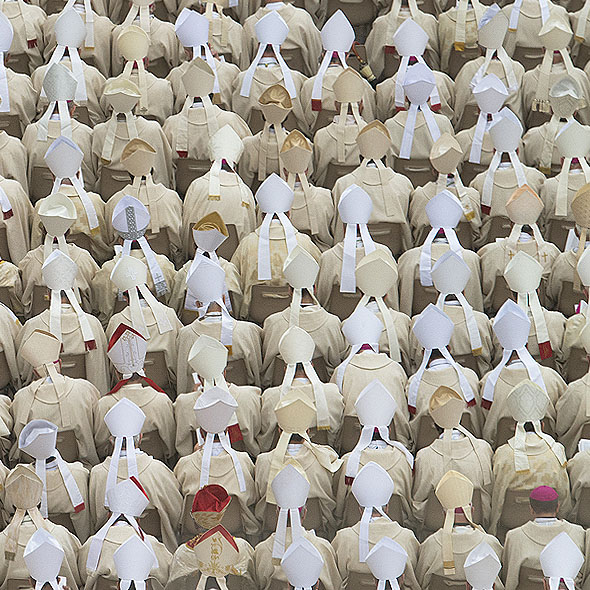 The media anticipation surrounding the Vatican Mass that took place on April 27 was almost without precedent, but then again so was the reason for the excitement—namely, two popes presiding over the canonization of two other popes.  In the two-hour ceremony, attended by more than 50 heads of state, 1,000 bishops, and witnessed by nearly a million onlookers, Pope Francis, joined by Emeritus Pope Benedict XVI, proclaimed sainthood for two pontifical predecessors, Popes John XXIII and John Paul II.

The global attention produced by the carefully managed rite of canonization of two Popes provided another surge for the soaring popularity of Francis.  This unprecedented action of a dual pontifical canonization also demonstrated Francis’ exceptional political and leadership skills.  Indeed, a key trope in the international reportage centered on the diplomat acumen of Pope Francis, who adroitly raised his stock with both Roman Catholic progressives and conservatives by honoring their respective, beloved popes: after all, he presided over the simultaneous canonization of both the liberal pope, John XXIII, who initiated the Roman Catholic Church’s reform movement, Vatican II, in the early 1960s, and the staunchly conservative pope, John Paul II, who halted reform.  Although Vatican officials were quick to downplay the deft political subtext of the dual canonization, the fact remains that this stratagem was intended to empower Francis as he moves forward to establish his own vision for the Roman Catholic Church, free from the shadows of both Popes John and John Paul.

Perhaps not surprisingly, the religious dimensions of the dual canonization drew considerably less interest amongst most commentators than did the political, symbolic, and historic aspects of the event.  Matters of faith were almost entirely absent from most discussions of the canonizations, as were any explanations of sainthood itself.  Although saints are central to the teachings of all the Apostolic Churches, the understanding and meaning of sainthood is not entirely identical for the Roman Catholic Church as it is for the Orthodox Church.  Furthermore, the differences in the understanding of sainthood underscore a fundamental divergence in the theology and the worldview between the Eastern and Western Churches.

This distinction can be illustrated by contrasting how Orthodoxy and Roman Catholicism approach the determining of sainthood.  How does the Roman Catholic Church make someone a saint?  An individual is made a saint in Roman Catholicism through a highly formalized procedure of canonization.  Five rules and corresponding steps must be satisfied for the process to be completed.  Each step in the process is supervised by a special Vatican department, which manages the method of awarding sainthood.  First, at least five years must have expired since the death of a candidate for sainthood before the process leading to canonization may begin.  Second, in concert with Vatican officials, the bishop of the diocese where the candidate died initiates an investigation into the life of the candidate to determine whether the deceased was a servant of God, whether, in other words, they lived their life with sufficient holiness to be considered for sainthood.  Third, a Papal committee, “the Congregation for the Causes of Saints,” evaluates the evidence and recommendations submitted by the diocese bishop, determines whether a candidate has shown proof of a life of “heroic virtue,” and forwards their findings to the Pope.  To reach the fourth step, beatification, a senior Vatican board must verify at least one miracle attributable to prayers (asking for their intercession) made to the candidate after their death.  The fifth step is canonization.  Although not requisite for martyrs, who need only one verified miracle, a second miracle attributable to the prayers made to the candidate after their beatification is the last official requirement necessary for the Pope to declare that individual a saint.

The orderly Roman Catholic method for determining sainthood may have all the hallmarks of an efficient and internally logical legislative or judicial process, but it has little to do with either the spirit or tradition of Christian sainthood.  Throughout Christianity’s first millennium of history, the Church recognized saints without resort to some formulaic, legalistic procedure for canonization.  Very early in the Church, saints were often chosen by the popular acclaim of believers.  For a thousand years in both the Eastern and Western lands of Christianity, local communities of the faithful remembered the Apostles, martyrs, and others in their liturgical gatherings, invoked them in their prayers, revered their relics, and believed them to be vehicles of the Holy Spirit.  The Early Church recognized six types, or categories, of saints according to their role in the life of the Church—the Forefathers of Christ and the Prophets, the Apostles and Evangelists, the Martyrs and Confessors, the Fathers and Hierarchs of the Church, the Ascetics and Monastics, and the Just and Holy in other walks of life—but it never developed a rigid, legalistic procedure for canonization.

What accounts for the West’s break from this ancient, universal Orthodox Christian tradition?  Once the Papacy began to assert its temporal ambitions for supreme authority over all of Christianity, the Church in the West set into motion an inexorable process leading to Rome’s estrangement from its own Orthodox origins.  Simply put, the Papacy’s concerns with power and supreme ecclesiastical authority explain why, beginning in the late-tenth century, Rome began to insist that saints be formally and officially registered for approval with the Pope.  In order to justify Papal usurpation and control of the determination of sainthood, the Church in the West developed the highly legalistic and seemingly precise method of determining who were saints that remains in use by the Vatican today.  Consistent with the aspirations for absolute authority and power, the Church in the West moved to subject the entire legalistic procedure of canonization to the Popes’ autocratic prerogative.  In other words, the Popes reserved for themselves the privilege to waive or alter any requirement or procedure for sainthood according to their will.

The Orthodox Church has not developed a legalistic system for sainthood.  Indeed, such a practice would be antithetical to Orthodox tradition of a holistic integration of doctrine and experience.  Orthodoxy continues to follow the principles and conventions of the Early Church.  So, how does the Orthodox Church make someone a saint?  The Orthodox Church works from the premise that the Church does not make saints, but rather, only God makes saints.  In this sense, the Orthodox Church’s canonization does not involve bestowing sainthood.  Rather, the Church in its fullness acknowledges that one is already a saint, an understanding flowing from the theological principle that an individual acquires sainthood by theosis, living in concert with God’s grace to the extent that that person’s holiness is complete.

The prominent Greek Orthodox theologian, George Bebis, who also makes it clear that the Church’s hierarchy, especially the Ecumenical Patriarch, has a crucial role to play in safeguarding canonization from abuses, provides us with an excellent summation of the Orthodox way, a tradition that honors and observes the central role of the people in determining sainthood:  “The Orthodox Church does not follow any official procedure for the ‘recognition’ of saints.  Initially, the Church accepted as saints those who had suffered martyrdom for Christ.  The saints are saints thanks to the grace of God, and they do not need official ecclesiastical recognition.  The Christian people, reading their lives and witnessing their performance of miracles, accept and honor them as saints.  St. John Chrysostom, persecuted and exiled by the civil and ecclesiastical authorities, was accepted as a saint of the Church by popular acclaim.  St. Basil the Great was accepted immediately after his death as a saint of the Church by the people.”

Inasmuch as saints are central to the history and teachings of the Church, the stark contrast between the Roman Catholic method and the Orthodox way of determining sainthood is important in and of itself, as well as for what it reveals about broader and deeper points of difference between the two Churches—on the one hand, Roman Catholicism’s embrace of legalism and emphasis on salvation through logic, obedience, and procedure, and Orthodoxy’s faith in redemption through freedom and the grace and mystery of God.

Orthodox Christians and Roman Catholics share many of the same saints, as well as reverence for saints in the life of Christians.  At the same time, the Churches in the East and the West diverge on the understanding of the road to sainthood.  Reconciling the substance versus process related to saints and sainthood, a difference that has never been expressed as open theological dispute and, therefore, offers potential for non-contentious dialogue and resolution, opens a way forward in the continuing repair of the rupture between Constantinople and Rome.  The dialogue of love expressed in the upcoming Pilgrimage of Brothers—the journey to Jerusalem by Ecumenical Patriarch Bartholomew and Pope Francis—presents possibilities for repairing the wounds to the entire Body of the Christian Church.  Such an act of healing would, of course, be something miraculous, for which saints, Orthodox and Roman Catholic, have always been revered and beloved.

Dr. Alexandros K. Kyrou is Professor of History at Salem State University, where he teaches on the Balkans, Byzantium, and the Ottoman Empire