The blessed Elder George came from the Black Sea and was orphaned and left on his own very early in life. After being persecuted  and imprisoned by the atheist regime in Georgia, he came to Greece where the humble man lived with such asceticism and zealous faith that he was granted the gifts of discretion, perception, precognition and prophecy.

Father George was born in Argyroupolis (Gümüşhane), in the Black Sea region, in 1901. He was orphaned at an early age and his upbringing fell to his devout grandmother. After the death of his grandmother and sister, he and his grandfather left for Erzurum in Greater Armenia. The death of his grandfather and the abuse of his brother took him to the Caucasus. Alone, poor, hurt and needy, accompanied by saints in dreams and visions, he arrived in Tiflis, in Georgia, and was taken by the bishop there to the Holy Monastery of the Life-Receiving Spring. He was clothed in the honourable monastic habit at the age of only nine [that is, he entered a pre-novitiate mode of existence] and would wear it for over half a century.

Saint George Karslides while in Russia

He had loved the ascetic life and prayer since his childhood. On 20 July 1919, he was tonsured a monk and his name changed from Athanasios to Symeon. It is reported that at the moment when he was tonsured, the bells began ringing of their own accord.

At the monastery, he met an uncle of the bishop, who helped him spiritually. The atheist regime of the Revolution of 1917 persecuted the Church, the clergy and monasticism. Together with other monks of the monastery, he was imprisoned in a sunless, underground room, through which sewers ran. He withstood dreadful privations, trusting in God. Many of the brethren died martyrs’ deaths there. He himself escaped certain death through the aid of the Mother of God. On 8 September 1925, he was ordained to the priesthood and renamed Giorgi (George). He conducted services in Georgian.

He soon acquired a name as a discerning, perceptive Elder, who had the gift of precognition. Many people came from far and wide to make the young hieromonk’s acquaintance and seek his advice. In 1923 he left Tiflis for Sukhumi. In his frequent liturgies he would commemorate a great many names. In his cell, he studied and prayed continually. Abstinence, asceticism, vigils and fasting were a constant part of his life. His prophesies were fulfilled, and people began to regard him as a saint. In 1929, he was able to come to Greece.

He glorified God for his salvation. The Black Sea region, Georgia and Russia remained in his memory as places of struggles, hardships and sacrifices. From Thessaloniki, where he arrived on October 19, 1929, he moved on to Katerini and then on further to the villages of Alonia, and Koukkos, Mikro Dasos near Kilkis, and finally, in 1930, to Sipsa near Drama. The maltreatment in the prison in Georgia had left him half-paralysed, very weak and he often had great difficulty in walking, so that he had to be carried to go where he wanted to.

His only possessions were a few Church books in Georgian, priest’s vestments, icons and a part of the relics of his sister, Anna. Many people started to come to him for help. Father George, who loved God, the saints, his brethren and all other people, conducted services of intercession, confessed people and admonished them. In 1938, he built the little monastery of the Ascension. Here he would celebrate, confess, preach, foretell, work miracles for twenty years. His cell and the church became a pool of Siloam for the bodily and spiritual ailments of many people.

Saint George Karslides after his arrival in Greece

He travelled to Jerusalem as a pilgrim and then to the Holy Mountain, where he met holy figures who convinced him to stay where he was, because the faithful had great need of his presence and witness. In 1941, he was miraculously saved from certain death at the hands of the Bulgarians, who had arrested him and wanted to execute him. The whole of his life passed in a continuous miracle. With the aid of Saint Nicholas, he was partially cured, at least to the extent that he could support himself.

He was always sparing, simple, fasting, vigilant, sickly and prayerful. He spoke little, was careful, strict and serious. He visited the sick and poor in great need, because he himself had been helped and he knew how to help others.

At the holy proskomidi (Office of Oblation), he would remember thousands of names of the living and the departed. Some of them he would make a note of, and, at the end of the Divine Liturgy would summon the relatives privately and tell them the problems facing their loved ones, living or dead. If they were dead, he would tell the relatives how they had ended their lives. Pure and innocent people saw him celebrate the Liturgy without his feet touching the ground. At the divine services he was luminous, peaceful and joyful. He concelebrated with saints. “I rarely celebrate alone” the Elder would say. He was particularly devoted to the Mother of God, the Honourable Forerunner and Saint George. He would send ill and needy people to different saints and, through his prayers, everything would turn out well. Out of humility, he did not wish his unworthiness to be honoured, but that God should be glorified by his saints. He used to call the saints “visitors”, and he had the gift of being able to see the state of the souls in church.

The Elder observed the canons of the Church very strictly and was not indulgent as regards inadmissible “dispensations”. He was even stricter with the unrepentant. He held the vocation of Spiritual Father in very high esteem and took his responsibilities seriously. He had no desire to surround himself with supporters who would flatter him, but retained a discriminatory severity. His aim was always to bring humility to the persons confessing, along with genuine contrition and repentance, for the salvation of their immortal souls.

His fervent faith, ascetic existence and pure life brought the humble and worthy servant of the Most High gifts of discernment, perception, precognition and prophecy. God enlightened the blessed Elder to the extent that he could see things far away and in the past as if they were close and in the present, even, sometimes, things which were in the future, as many of his spiritual children relate. Some doubted the Elder’s gifts, but when they got to know him they were not slow to recognize that he was truly a man of God. The Elder used his gifts for the assistance and salvation of souls, not to expose or shame people or to promote and boast about himself. He spoke with tears about imminent hardships: the German occupation in 1940, the Bulgarian incursion, and the Civil War. He read people’s hearts like an open book. In order to retain his humility, he sometimes feigned stupidity, like  foolishness for Christ. Virtue takes a great deal of effort to acquire and ample skill to preserve. 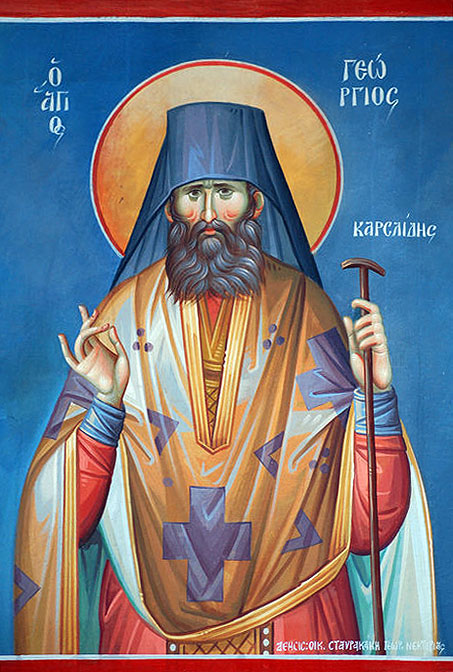 In his pastoral work, the Elder showed particular attention to women, who, because of their wealth of sensibility easily exaggerate the honour to be paid to others. He was quietly strict with them. But he concealed a heart that was full of love for everyone. His almsgiving was always in secret. Once it got dark, he would send some of his confidantes off with clothes and food for the poor. He comforted those who were grieving and cared conscientiously for the departed. He loved children, gave them affectionate advice and shared little gifts with them unstintingly. He always tried to conceal himself and never wanted to be in the limelight or to be honoured. The Elder never wanted anyone to leave his monastery hungry. He would cook and bake bread and share his efforts with everyone as a “blessing”. He was hard-working, tireless, charitable and open-handed.

For all of this, the faithful harboured great respect and love for the Elder. He accepted the love of his children, but did not provoke or desire it. He was humble and liked especially to talk about holy humility. In the end, he lived in sacred isolation. Most people did not understand him and some, indeed, misunderstood him. There were only a few who could understand the depth of his spirituality.

He foresaw and foretold exactly the date of his departure from this life. Having been prepared for some time, he awaited it with even greater prayer, giving his final instructions to his spiritual children. Three days before his death, the sacrament of Divine Unction was celebrated. He made his communion. He forgave, blessed and made his farewells to everyone. He died on 4 November 1959. The last words which passed his lips were: “Open to me the gate of loving-kindness, blessed Mother of God”. 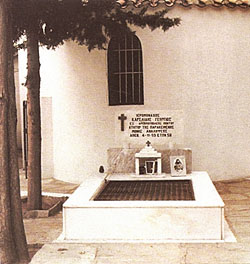 An orphaned, grieving and inconsolable body of people accompanied him to his final resting place, behind the church of the Ascension, where he had served for about thirty years. His face was peaceful, joyful and radiant. His dead body was supple, just as is the case of those on the Holy Mountain. The two cypress trees at his grave bent, as though in veneration, as he had foretold, and lots of birds gathered at the time of his burial, with no fear of the large crowd of people. Everyone was now certain that they were burying a saint. He had been asked to be buried in his vestments, with his cross and the liturgical books that he had bought from Georgia.

Saint George was inscribed among the Saints by the Ecumenical Patriarch Bartholomew II, in the city of Drama, year 2008. 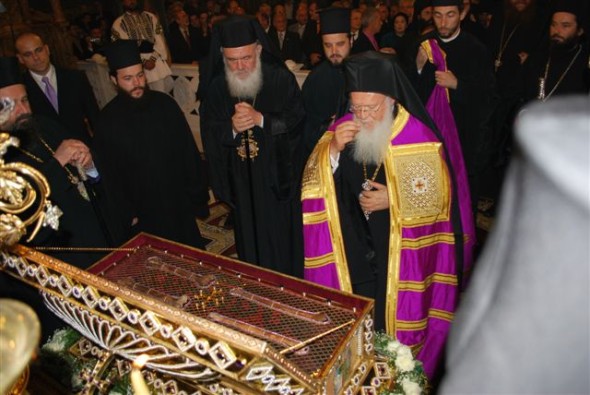 Source: Elder Moses the Athonite, Saint George the Elder with the Gift of Precognition, in Πεμπτουσία vol. 17, pp. 116-23, April-July 2005. The text refers to Saint George as “Elder”, because, at the time when Fr. Moses wrote it, the former had not yet been recognized as a saint of the Orthodox Church.