Yet in Exodus 23:20-23, God tells the people of Israel that He is sending His angel ahead of them to guide and protect them, and says that His Name is in Him:

“Behold, I am sending an angel ahead of you to guard you along the way and to bring you to the place I have prepared. Pay attention to him and listen to what he says. Do not rebel against him; he will not forgive your rebellion, since my Name is in him. If you listen carefully to what he says and do all that I say, I will be an enemy to your enemies and will oppose those who oppose you. My angel will go ahead of you and bring you into the land of the Amorites…” 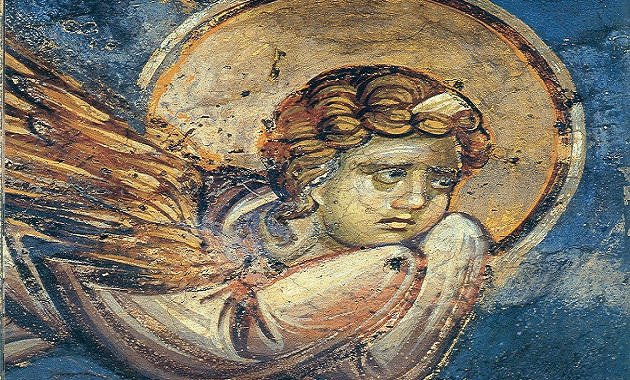 Since the Angel is God’s ‘Messenger’, the Word and Son of God, He is distinct from the person of the Father and is subordinate to Him. Thus it is characteristic that the words, “He Who sent me” are uttered by Jesus no less than 26 times in the Gospels. Yet at the same time, being the Lord God Himself, one of the Trinity, “true God from true God, begotten of the Father before all ages”, and not a created being like the angels, the Angel of the Lord frequently declares Himself as God, and receives worship and sacrifices.

That the Angel of the Lord is the Pre-Incarnate Christ is stated not only by individual Church Fathers, but also by an ancient synod of the Church, in a Creedal Statement by the Synod of Antioch in 268/9. This is the earliest surviving synodical statement on Old Testament Christology:

“The Son was not just a spectator nor was he merely present, but… came down and appeared to Abraham “at the oak of Mamre”, [as] one of the three, with whom the patriarch conversed as Lord and Judge… This is who, fulfilling the Fathers will, appears to and converses with the patriarchs… sometimes as an Angel, at other times as Lord, and at other times being testified to as God. Truly it is impious to suppose that one can call the God of all an angel; however the Angel of the Father is the Son, he is Lord and God, for it is written:

“His name will be called the Angel of Great Council”. For… it is written: “God tested Abraham, and said to him, ‘Abraham! Abraham!’ And he said, ‘Here I am.’ Then He said, ‘Take now your beloved Son’” etc. And again: “And the Angel of the Lord called to him and said, ‘Abraham! Abraham!’” etc. “‘For now I know that you fear God, since for My sake you have not spear your beloved son… and he called the name of the place ‘The-Lord-Has-Appeared’; as it is said to this day, ‘In the mountain the Lord was seen’”.

But truly the Law was also in a similar manner, we say, given to Moses through the ministry of the Son of God; as the Apostle, teaching [us], says: “What purpose then does the law serve? It was added because of transgressions, till the Seed should come to whom the promised was made; and it was appointed through angels by the hand of a mediator”. Verily we do not know of another mediator between God and men apart from Him. But we are also taught these things by Moses: “Then the Angel appeared to him in a flame of fire from the midst of the bush” etc…

This is who, speaking the truth, says: “Not that anyone has seen the Father, except He who is from the Father; He has seen the Father”. And in the same Gospel: “You have neither heard His voice at any time, nor seen His form”, and: “No one has seen God at any time. The only begotten Son, who is in the bosom of the Father, He has declared Him”. The Apostle says of Him: “He is the image of the invisible God”, and in another place he says: “To the King eternal, incorruptible, invisible, to God who alone is wise, be honour and glory to the ages of ages. Amen.”… The Son however, being with the Father, is indeed God and Lord of all things made, yet he was sent by the Father from the heavens, and was made flesh, becoming man”. (Translation by Rev. Michael S. Spanou)

There can be no doubt from the passages cited above that those who see the Angel believe they have seen God. Even in the Old Testament, there is a plurality of persons in the Godhead: “I appealed to the Lord, the Father of my Lord, not to forsake me in the days of affliction, at the time when there is not help against the proud” (Wisdom of Sirach 51:10); “The Lord said to my Lord, ‘Sit at my right hand, till I make your enemies your footstool’.” (Psalm 109:1 [LXX]) Thus it is characteristic that the Greek Fathers interpret God’s words in Genesis 1:26, “Let us make man in our image and after our likeness” as the three persons of the Trinity speaking together. Moreover, the Hebrew words for God, “Elohim”, and Lord, “Adonai”, are plural, not singular. Thus it should not take us by surprise that the Israelites perceive God Himself in a person known and described as an “angel” or “messenger” of the Lord.

Thus when we read the Old Testament in light of Greek patristic thought and in the greater context of scripture, we can only conclude that the Angel of the Lord is indeed the Son and Word of God, “true God from true God”. He is “with God” and yet “is God” (John 1:1). “And his name is called the Angel of Great Counsel” (Isaiah 9:6 LXX]).