B. The Liturgy of the Faithful

The second part of the Divine Liturgy is the Liturgy of the Faithful, in which only baptized Christians may take part. It consists of:
a) The Great Entrance
b) The embrace and confession of the faith
c) The Holy Offertory
d) Preparation for Holy Communion
e) Holy Communion
f) Thanksgiving and dismissal 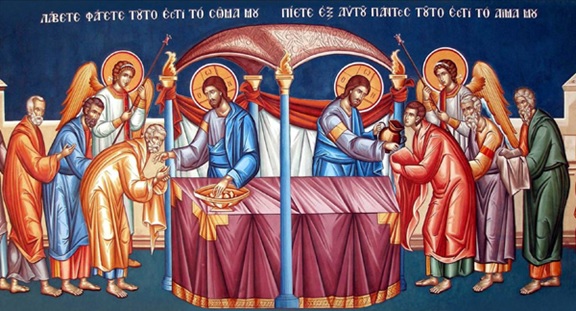 The Great Entrance is the transfer of the gifts from the Preparation table to the Holy Altar. Before this happens, the priest says two prayers, through which he asks God to cleanse us of all sin, so that we may be counted worthy of participating in the Sacrament of the Divine Eucharist. The people sing the Cherubic Hymn: ‘Let us who mystically represent the Cherubim and who sing the thrice-holy hymn to the life-giving Holy Trinity, now lay aside every worldly care, so that we may receive the King of all, Who is invisibly escorted by the angelic hosts’. 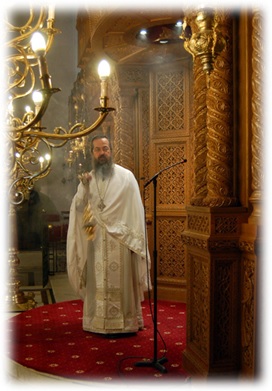 The priests says in a low voice the prayer ‘We have seen the Resurrection of Christ…’ and Psalm 50, censing the Holy Altar, the Preparation table, the iconostas and the people. He then asks forgiveness of the congregation and takes the chalice and paten (or, if there’s a deacon he gives them to him) and comes out of the north door of the sanctuary, preceded by someone bearing a candle and incense.

As he makes his way down the north aisle, he says in a loud voice: ‘May the Lord God remember all of us in His Kingdom, always, now and forever and unto the ages of ages’. When he reaches the central aisle, and enters the Royal Doors, he places the chalice and paten on the Holy Altar, then covers and censes them. 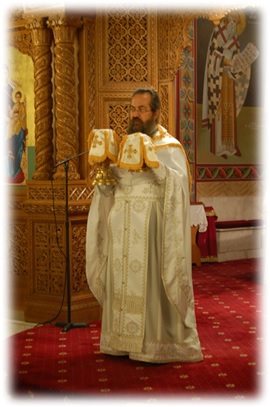 The Great Entrance symbolizes Christ’s path towards His suffering. When the priest sets the chalice and paten on the Holy Altar, he’s laying the Body and Blood of Christ in the tomb, as Joseph did, which is why he says the hymn from Great Friday: ‘When noble Joseph had taken down Your most pure body from the Tree, he wrapped it in clean linen and sweet spices and laid it in a new tomb’.