The endeavours and teaching of Saint Gregory Palamas were directed at ensuring that people could enjoy the possibility of participating in God, at demonstrating that God is not merely completely transcendental and beyond involvement but is also here with us in the world and welcomes our involvement with Him. Gregory correctly saw, in Varlaam’s views, the renewal of the theological heresies of the 4th century, those of Evnomios, Areios, and Makedonios, who, by accepting the Son and Holy Spirit as creations, deprived people of the chance of glorification [deification]. Because how could They glorify people if They Themselves were also creations and in need of deification, as Gregory the Theologian so succinctly and provocatively says about the Holy Spirit: “unless the Holy Spirit is deified first and thus deified with those of equal value”. 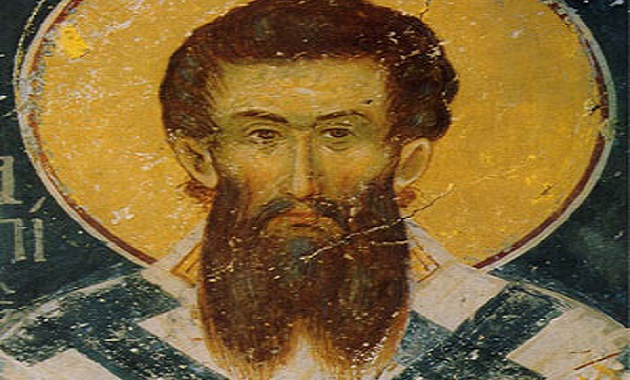 The same dangerous consequences for people’s salvation were present also in the views of Varlaam, who claimed that people communicated with God by created means, with the intellect and understanding alone, while on the part of God there was nothing that He could give to people as a gift in order to glorify them. Divine grace, for Varlaam, was not uncreated but created. Western scholars play down the significance of the theological efforts of Saint Gregory and the dangers of Varlaam’s heresy when all they see is mere differences within monastic circles regarding the best way of praying, and the observation and vision of the light.

These were simply the starting-points. The clashes arose later on a purely dogmatic, theological level and, as the Orthodox Church viewed the unanimous decisions of the Ecumenical Synods concerning the ancient heretics, it saw likewise in the resolutions of the Synods which justified Gregory Palamas, the authentic expression of its faith in God and in the glorification of humankind. In the third Synodal tome, which was published against  the supporters of Varlaam and Akyndinos, the old and new heresies regarding the created or uncreated nature of divine grace are clearly linked.

The Tome states: “It has been shown that those who say that only the Son and Holy Spirit are uncreated energies of God and does not glorify the common natural energy of the three hypostases, which Akindynos denied, dares to reintroduce into the Church of God the heresy of Markellos, Foteinos and Sofronios, which once died and was banished”. Palamas himself makes a direct connection between the heresy of Varlaam and the ancient, anti-Trinitarian heresies of Areios and Makedonios.

He observes, however, that by claiming that the Son and the Holy Spirit are created, they trisected and divided the Triune Divinity into created and uncreated, as did Varlaam and his supporters, who claimed that the light of the age to come, which will shine abundantly upon the righteous, every energy and force of the Triune God, are created things: “they also impiously divide the Triune Divinity into created and uncreated”. He declared at the synod, in the presence of the emperor and his opponents that he was not battling over words and names. but over dogmas and realities.

The dogma affected was, on the one hand, the simplicity and indivisibility of God and, on the other, the very essence of God, which appeared without physical energy and action, while, as the VIth  Ecumenical Synod  [Constantinople, 680], had declared, on the basis of the teaching of Saint Maximos the Confessor and to oppose Monoenergetism that “it is impossible and against the laws of nature for there to be nature and energy without nature”. The realities that he was fighting for were overcoming the resistance to the concept that people could participate in God, so that they could be glorified.

In the second Synodal tome, against the Varlaamite  Prokhoros Kydonis, the synod noted that with what he said, he claimed that “people could certainly not participate in God”, and that, since the energies of God are, in themselves, created, “it is clear that our glorifications, as the result of created things, are created and subordinate to those of the divine”. Saint Gregory’s incomparable formulation regarding the dangers to which Varlaam’s heretical views exposed people’s salvation is enough to place him among the great Fathers of the Church. Because he shows that the danger was not for things of no great importance, but salvation itself- something that, unfortunately, Western scholars are unwilling to accept, because, like their Churches, they are supporters of  the views of Varlaam.

The problem as to whether God is shareable with us or unshareable was created by Varlaam and it is he who must be held to be the mover behind this conflict, the hesychast controversy as it is wrongly called. The picture which emerges from the sources as regards the responsibility for the appearance of this heterodox teaching is so clear that there is no justification for any reservations, far less for the impression to be given that the cause of the conflict was Saint Gregeory Palamas. As with the earlier tradition, when the heretics formulated their views first and then the Church came along with fathers and synods in order to confute them and express the Orthodox teaching, the same thing happened here.

Varlaam was affronted, as we have seen, in the matter of theologizing, because Saint Gregory’s view was that we should employ the demonstrable rather than syllogistic method of the philosophers, and he sought a way to humiliate Gregory. He believed that he had found many weak points and many innovations in hesychast spirituality. He pretended to be a disciple, and when he reckoned he had learned enough about Orthodox mysticism, he began to castigate the monks and the tradition they represented.

Equipped merely with philosophical propositions and completely inexperienced as regards the world opened up by another kind of illumination, the enlightenment of the Holy Spirit, he attempted to interpret Orthodoxy with secular philosophy, even though this had been condemned in both the New Testament and in the Patristic literature of the Church. The same is true today of those who attempt to judge the world of Byzantium, even though they are uninitiated and incompetent, alien to its spirit and ill-informed- outside observers rather than participants in its inspired structure and constitution.

What scandalized Varlaam was the claim of the monks that those who had cleansed themselves of the passions received shafts of illumination in their hearts, that is the presence of the divine light. It is well-known that, in the New Testament, the position is repeatedly stated that the pure in heart will see God, that Christ will make Himself known to those who observe the Lord’s commandments, and that He and the Father will reside and remain within them: “We shall come and make a dwelling-place in them”. Even the Holy Spirit resides within us and cries “Abba, Father”.

Of course, the final perfection of this vision of God, which it is possible for people to have, will take place in the future. Now there is only partial vision, in a looking-glass and enigma. But those who are worthy, who observe the commandments and are cleansed of the passions, are able from now to taste the blessedness of the last days; they can be transported from now into the condition of the angels and live from now in the kingdom of heaven. In the realm of theology, there is ample evidence of the character, the sweetness and the mystical attraction of Orthodoxy, which accepts and teaches that the new age, the kingdom of heaven, has already started, from the day of the outpouring of the Holy Spirit at Pentecost.

Hence there are always new illuminations and visions of God in the Church, Pentecost continues without cessation. Christ Himself said that among His disciples there were people who would see the kingdom of God coming in nascent form [εν δυνάμει= potential], even before they died. And this prophecy of the Lord was fulfilled at the Metamorphosis, at which the three disciples saw the brilliant light of His divinity, and at Pentecost with the descent of the Holy Spirit in the form of tongues of fire. There are examples in the New Testament of visions of the divine light, visions of God, such as that of Paul on the road to Damascus and of the Protomartyr Stephen at the time of his martyrdom.

The reading of “εν δυνάμει= potential” rather than “in power”, is reinforced by the Dismissal Hymn for the feast of the Transfiguration, which says that Christ showed the disciples His glory “insofar as they could bear it”. This clearly indicates that there was greater glory which they could not have borne at that time and so they were shown an incipient or nascent version which was appropriate to their strength. Of course, it goes without saying that the glory they saw was the very same glory of Christ, but not in its fullness. WJL.