Interpretation of Death in the Classical Age

People exist, then, only to die. Despite this, the soul leaves the human body after death and is reincarnated in order to be punished for its sins. Only purified souls manage to escape to boundless and eternal bliss.

The beliefs of other peoples in antiquity, such as the Babylonians and Egyptians were closer to the Homeric ideas. Babylonian civilization in particular believed that the dead remained completely motionless in the deep darkness of Hades, the only exceptions being the heroes who were in the ‘land of the blessed’. Similarly, the Egyptians believed that, after death, the soul didn’t return to the world but followed the body. This is why they built enormous tombs, the pyramids, and why they embalmed dead bodies: to ensure that the soul had a dwelling-place and happiness after death. It’s worth noting that pre-Christian peoples believed that, after death, people continued, one way or another, to live a life that was either better or worse than that on earth. 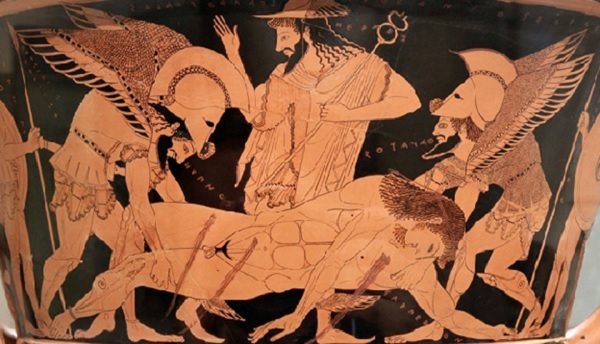 Greek tragedians of the ‘Golden Century’ [roughly 480-404 BC]* sought a more complete interpretation of the phenomenon of death. They continued to believe in the survival of the soul after death. Aeschylus (525-455 BC), however, didn’t accept the resurrection of the body and typically calls the god of Death unavoidable, since he’s the only one who can’t be bought off. Sophocles (496-406) believed that the sorrow of death could be alleviated through the dead meeting their loved ones in the Elsysian Fields.
This thought, however, was of no comfort to the Greeks. Death was thought to be bad. People died and left the world of light, delight, beauty and symmetry and descended into gloomy Hades. This caused widespread grief, to the extent that some people believed it would be better not to be born at all. There was therefore a great rift between this life and the next, and it was Plato who managed to bridge it.

The fundamental idea of Plato (427-345 BC) can be summed up as the fact that, by nature, the soul is immortal, part of the divine essence, and comes from the realm of Ideas. It exists before the body, to which it gives life and movement. For this philosopher, the body is of an earthly and mortal nature. He did, however, under the influence of the Orphic myth, believe in the reincarnation of the soul in order to achieve its purification. His advice was that if we purify our soul, that is take care of it with virtue and wisdom in this life, we can be brave in the face of death. Death was seen as a great boon for us. Thus, Socrates, Plato’s teacher, was able to face it with equanimity. He drank hemlock [on being sentenced to death] without any objection. Despite this, at the end of his Apology, Socrates doubted whether he’d end up in a better place after death, because this was something only a god could know.

Although Aristotle was a student of Plato’s he had his own views on this matter. He defined death as the separation of the soul from the body. Without the soul to hold it together, the body suffers decay and dissolution. The soul is considered to be of supreme importance and is divided into three parts. Two of these are material and mortal (the passive intellect), which were associated with organic functions, and the other (the active intellect), which is immortal. This immortal part is of divine provenance. It belongs to and is defined by a superior, immortal form, a god to whom it returns. For Aristotle, the active intellect appears to be the same for all people. So he doesn’t believe in individual immortality, but rather in one that is for the whole of the human race. Finally, he considers death to be better than and preferable to life, arriving at the conclusion that the best thing is not to be born at all.

It can be seen that the philosophy of both Plato and Aristotle is imbued with the notion of the pre-existence of the soul. This idea is in conflict with Holy Scripture. Saint Gregory of Nyssa notes that the body and soul are created simultaneously and together make up the human person. So the soul does not preexist, so that the body to take it as one from among many.

* ‘Golden’ in terms of the Athens-centred view of the Classical Age.