On Worship where it is Due

In the text by Saint Nil Sorskij which we published recently on the passions of avarice, anger, sorrow and sloth, we read: “In order to defeat the spirit of ingratitude and blasphemy we say: ‘Get behind me, Satan. I worship my Lord and God and I serve Him alone’”. This is a familiar theme from as far back as the earliest revelations of God to the people of Israel in the Old Testament (e.g. Exodus and Deuteronomy: “You shall have no other gods before me”, and, ibid: “for I am a jealous God”), and continuing through the New Testament. When this teaching came into conflict with the state religion of imperial Rome, thousands of Christians- and Jews- were martyred because they refused to abandon it. We should not be surprised, therefore, to find it mentioned in the Spiritual Meadow. 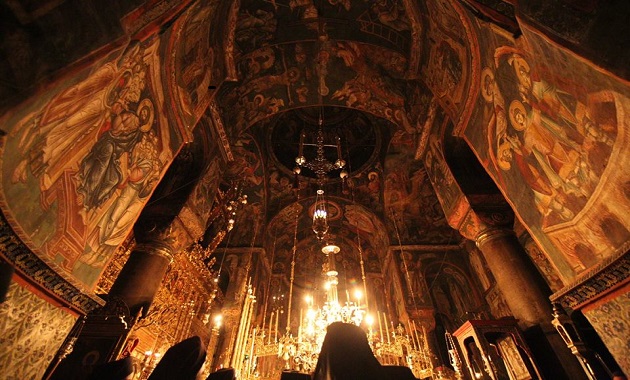 This work was composed by Ioannis Moskhos, a Damascan monk who lived in strict asceticism in the Kedron Valley before going to Egypt. Driven out in 614 by the Sassanian invasion of the Middle East, he fled to Rome where he wrote his book, some time before his death in September, 619. There is some slight confusion over authorship. John the Damascan and the Fathers of the 7th Ecumenical Synod attribute it to Ioannis’ disciple, Sofronios, later Patriarch of Jerusalem. The proem to the work, however, makes it clear that it was given to Sofronios by someone who addresses him as “child”. The inspiration behind the title is also explained in the same place:

“… you’ll find herein the virtues of the holy men who have shone in our times, in accordance with the words of the psalm [1, 3], ‘planted by the brooks of waters’. All of them were equally loving towards God, through the grace of Christ our God, but each in a different way and each adorned with different virtues, with beauty and comeliness. Of these, I’ve plucked the fairest blooms, and, having plaited a garland of the eternal meadow, I offer it to you, my most faithful child, and, through you, to everyone. This is why I’ve called this work a meadow, because of the delight, the fragrance and the benefit”.

It should also be mentioned that, for anyone interested in the Greek language, one of the delights of the work is the direct and graphic style in which it is written, which is so refreshing compared to the thick porridge of some, more official texts.

As was mentioned above, John the Damascan and the Fathers of the 7th Ecumenical Synod attributed the Meadow, to Sofronios. But why were they interested in it at all? Because they used section 45 in their arguments in favour of paying reverence to icons. The relevant portion reads as follows:

One of the Elders told us this story. Abba Theodoros Iliotis said that there was a hermit who lived a very strict life on the Mount of Olives. But was he was under great attack from the demon of lasciviousness. So one day, when it had assaulted him with particular frenzy, the Elder was barely able to withstand it and said to the demon:

‘How long will you torment me? Just get away from me. We’ve grown old together’.

Then the demon appeared to him in visible form and said:

‘By Him Who dwells in the heavens, I’ll never speak of what you tell me’.

The demon said to him:

‘Stop reverencing that icon, and I won’t attack you again’.

Now the icon depicted the figure of Our Lady Mary, the Mother of God, holding Our Lord, Jesus Christ. The monk said to the demon:

‘Let me think about it’.

The next day he sent a message to Abba Theodoros Iliotis (who told us the story), who was then living in the lavra of Faran. When Abba Theodoros came to see him, the hermit told him everything that had happened. The former said to him:

‘You really were fooled by the demon into swearing an oath, abba, but you’ve done well to tell me about it. Because it’s better in this land not to quit a house of ill repute, where you have no business to be in the first place, than to refuse to worship Our Lord Jesus Christ and His mother’.

When he had given the hermit further support and had strengthened him with more words, he left for his own place.

The demon then reappeared and said:

‘What’s this, you bad old man [kakoyeros; a pun on kaloyeros, a good old man, a monk]. Didn’t you swear to me that you wouldn’t tell anyone? Why did you tell everything to that man who came to see you? I’m telling you, kakoyeros, you’ll have to answer on Judgement Day for breaking your oath’.

‘I’m well aware of the fact that I swore an oath and then broke it, though I didn’t swear to my Lord and Creator. I’m not going to listen to you. Because you’ll receive condign punishment for being the instigator of both the bad advice and the oath-breaking’.