Who has a need for Christmas?

He had been extremely wealthy, but something went terribly wrong. After the collapse of his business, there remained not even enough to feed his family of three daughters. In his desperation—who can imagine such desperation?—he figured that his only recourse for grocery money was to sell the girls into prostitution. No where to turn. Nothing to eat. No option.

Most of us could hardly imagine such desperation. Most reading this article have never involuntarily gone without a meal, much less a week’s worth. Many of us have never ‘needed’ anything. 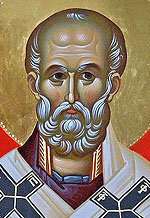 As the son of wealthy parents, Nicholas had never known such need himself. But he knew the needy, and he helped them. He knew that it was immoral to ignore their plight. He had the means to help, and did. In this case, under the cover of darkness, having assembled small bags of money (in large amounts), he made his way into their neighborhood and tossed the bundles through an open window in their house, praying that the gift would be sufficient to prevent such a sin. Thank God, it was. Overjoyed by such grace, Nicholas repeated his secret efforts twice more for the same family and saved them from destruction. Later, in his generosity, he even rescued a city plagued by famine. Saint Nicholas (Feast day December 6) was Archbishop of Myra (Asia Minor) in the 4th century.

For most of us in the Low-country, needs were long ago replaced with wants. During the ‘Christmas Season’ (which is actually Advent…) more and more emphasis has been placed on “what do you want for Christmas?” Have you ever been asked, “What do you need for Christmas?”

Many of us spend a frantic month searching for the ‘perfect gift’ for that ‘special someone’ who ‘has everything’. Why on earth do we need to buy ‘something’ (which usually winds up begin just ‘some’ thing) for someone who has everything? Someone who has NO need?

Think on this for a moment: it is now common to rent a storage unit to hold all the stuff we can’t fit in our houses. Many spend hundreds of dollars monthly for a roof over stacked furniture piled in a climate-controlled warehouse. What about the poor who have no roof and are stacked on top of themselves? Who needs the roof?

For many, charity has become a year-end tax deduction or the check we write on occasion during the year to assuage the guilt we have for accumulating too much stuff and continuing to buy more anyway. Such charity does help the needy, and the Church is grateful to be able to distribute it. But more so, we are called to change our whole worldview—our selves and souls—to reflect the life of Christ like St. Nicholas did.

We all have so much to give—but we forget that it is not actually ours. Everything we have is given to us by God to be used by us to show the love of God to those who truly need it. Jesus said, “Truly, I say to you, as you did it [clothed the naked, fed the hungry, visited the sick and imprisoned, etc.] to one of the least of these my brethren, you did it to me” (Matthew 25:40ff). Jesus didn’t give new chariots to people or even grant them new clothing. Rather, he gave them health, healing, hope, and salvation—and in the end, he gave his life for them, for us. This is our calling.

St. Nicholas was an ardent follower of Jesus Christ. He quietly and humbly lived the Gospel, and did so without desire for or requirement of public thanks or recognition. He gave because, in his abundance he knew his responsibility as a human being to help the helpless and to give hope to the hopeless. Our call is no different. So, let’s ask a new question this year. Instead of “what do you want for Christmas?” let’s ask, “Who has needs this Christmas whom we can help?” And having asked the question, let our giving be, like St. Nicholas’, quiet, anonymous, given to the glory of God, than all may see these good works, and give glory to God in heaven.

This article was originally published in the Charleston, SC, Post and Courier, Faith and Values section, 12/9/07.  Posted here with permission.

Fr John Parker is the Chair of the Department of Evangelization of the Orthodox Church in America, and the Pastor of Holy Ascension Orthodox Church in Mount Pleasant, SC. To read more, visit www.ocacharleston.org or www.holyascension.blogspot.com.  Fr John Can be reached at [email protected]