Yesterday, my beloved friends, the Twelve Days of Christmas came to an end. They last from Christmas to Epiphany, with the exception of the eve of Epiphany. After the Twelve Days, the first feast is that of the synaxis of Saint John the Baptist.

Saint John has no need of human praise; Christ Himself praises him, when he says that of all the people ever born, there is not one greater than him (see Matth. 11, 11). He’s greater than Noah, Abraham, Jacob, the patriarchs, than all great people. He was born miraculously to elderly parents, Zachariah and Elizabeth, who, in fact, was barren. A child emerging from Elizabeth’s womb was as likely as a flower springing from a rock. 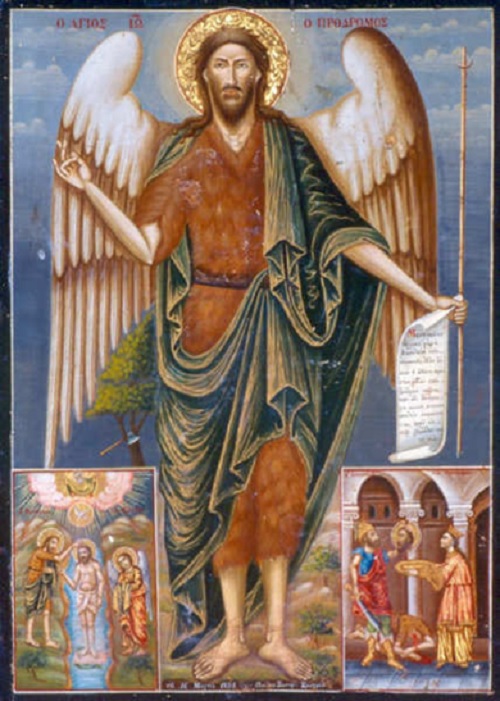 While he was still an embryo in his mother’s womb, he leapt when she received the All-Holy Mother of God, who was also pregnant.

When he grew up, he didn’t remain in the world. He left and went into the desert, into the school of great men. There he lived a life which was a rebuke to today’s consumer society, whose slogan is: ‘Eat, drink and be merry, for tomorrow we die (Is. 22, 1; I Cor. 15, 32). You who are deranged, come and look at yourselves in the mirror. How did Saint John live? His food was ‘locusts’ (Matth. 3, 4), the well-known insects of the fields which frugal Arabs, to this day, dry and eat.* His drink was water from the River Jordan. His clothing was a cloak made of camel hair. His bed was the sand next to the river. His roof was the stars of heaven. For company he had the wild desert animals, which came to him like lambs. His sanctity, you see, had tamed them all. And though the lions and tigers respected him, he was torn to pieces by a woman, Herodias. So he lived there in the university of silence, where great personalities grow in stature. At a mature age, he received a command from above to go the banks of the Jordan and set up his pulpit there. His sermons were fiery and full of fierce denunciation. Lightning and thunder combined. He called on everyone to return to God. And thousands of people, from all walks of life, did, in fact, do so. He was a magnet, drawing people to him. He counselled repentance and baptized people in the River Jordan.

Among all those who came, one stood out. Because he wore a crown or a sword and came in a chariot? No. Just an ordinary person. But His name was ‘the name above everything (Phil. 2, 9). All other names will be expunged, but His will remain: ‘Jesus Christ’ (cf. Rev. 2, 17).

How could John have recognized that beneath the form of a poor Nazarene, the majesty of the Godhead was concealed? And yet, he did. Christ said: ‘Baptize me’. ‘I cant,’, he replied. ‘I’m nothing compared to you’. But Christ insisted and, in the end, was baptized. Not because of His sins- He was sinless- but in order to reveal the mystery of the Holy Trinity. And this is where we differ other religious belief systems, even the monotheistic ones. They have Allah or someone else. We have one God in three Persons: Father, Son and Holy Spirit. Holy Spirit, have mercy on your world.

How was the mystery of the Holy Trinity revealed? When Christ was still in the water, the heavens opened- let unbelievers doubt if they like, that’s up to them. We believe- and the Holy Spirit, in the form of a dove descended and sat upon His head. At the same time, a voice was heard, a proclamation from the heavenly Father. Not like those you get at New Year [from politicians and so on], which are full of falsehoods. This was a heavenly and eternal proclamation for the whole of humanity: ‘This is my beloved Son, in whom I am well pleased (Matth. 3, 17). The same words are used by the heavenly Father when Christ completed His time on earth, though then He added: ‘Listen to Him (Mark, 9, 7; Luke 9, 35).

And since then, humanity has had a guide. Our guide is Christ, Who said: ‘I am the way, truth and life’ (Jn. 14, 6). Those who follow Him are saved. He’s the perfect guide, the perfect human being, the very incarnation of virtue. Others, whoever they are, are mere pieces: ‘One is Holy, One is the Lord, Jesus Christ, to the glory of God the Father. Amen’ (Phil. 2, 11 and the Divine Liturgy).

When Christ went into the desert, John pointed to him, as the wonderful hymn at the Hours puts it: ‘With your hand you touched the immaculate head of the Lord and with the finger of that hand you showed Him to us: on our behalf, Baptist, stretch out that same hand over Him, since you have great boldness before Him’ (9th Hour, Theophany). This was the last hymn sung by [the famous Greek author] Papadiamandis- who was also an excellent chanter- when, as an old man on his island, poor and disregarded, he departed this life. He rose from his bed and sang it. He died with these words on his lips. In those days, people closed their eyes with the ‘songs of God’. Now…

So John pointed Christ out to the people and said: ‘Behold the Lamb of God, Who takes away the sin of the world’. (Jn. 1, 29). If we are to understand this, we have to remember that, for the relief of their sins, the Jews had a lamb which they took to Solomon’s temple to offer as a sacrifice. At the moment when the priest sacrificed it, he would lay his hands upon it, so that the sins would be expelled and go into the lamb. This was a prototype, a foreshadowing of the great sacrifice which Jesus came to make. Millions of lambs have been slaughtered, but the blood of animals doesn’t have the power to remit sins (Matth. 9.6.). Only the blood of Christ, the ‘Lamb of God’ can expunge sins. This is why Christ is called the Lamb, because, just as the lamb hadn’t done anything wrong, but was led to the slaughter without complaint, so the same is true of Christ. And, just as in the sacrifices, the sins were ‘charged’ to the animals, so Christ took upon Himself the sins of all of us. Do we realize this? If not, we’re not Christians. Candles won’t save us, nor will icons and pilgrimages. Nor will prostrations and ascetic struggles. All of that doesn’t remit a single sin. Sins are forgiven only by ‘the Lamb of God’, as John says. Unless you believe in the blood of Christ which was shed for you on Golgotha, you won’t be saved.

Let me finish with an image. A Viennese artist painted a man whose enemies had captured him and laden him with a heavy burden. They tied it so tightly on his back, that he couldn’t get free of it. He begged others to get it off him, but nobody could. Then somebody told him: ‘If you want to be free of your burden, go up on that mountain and you’ll come to a Cross with Christ crucified on it. If you ask with faith, the miracle will happen’. And that’s what happened. The burden immediately fell off his back and rolled down into the abyss. And the man glorified Christ. Each of us, my beloved friends, is carrying a weight heavier than Mount Olympus. It’s only through Christ that we’ll ever be free of it. Let’s believe in Him. There’s nothing else in the world. I’m telling you. I’ve been preaching for fifty years. If I didn’t believe, I’d have gone and done something entirely different, rather than fool people. I believe in God; I believe in divine grace, I believe in the sacraments; and I believe in our sacred Tradition. The sun may be a lie; the stars may be a lie, we ourselves may be a lie. But Jesus Christ isn’t a lie. Hymn and praise Him to all the ages. Amen.