Today, we have the pleasure to host an interview with Dr Graham Speake, FSA, Honorary Secretary and founder of the Friends of Mount Athos. His Orthodox name is Gregory Palamas. He was baptized at Vatopedi by Abbot Ephraim in 1999, and his spiritual father is Metropolitan Kallistos (Ware). Dr Speake is the author of ‘Mount Athos: Renewal in Paradise’ (Yale University Press, 2002) for which he was awarded the Criticos Prize. He is also a retired publisher.

“Pemptousia”: Please tell us something about the Friends of Mount Athos society. When was it founded?  How is it administered?

Dr Graham Speake: The society was officially founded in 1990, but in fact it goes back a little before that and it owes its origin to the correspondence columns of The Times newspaper. In March 1989 Derek Hill, an artist who lived in Ireland, published a letter about the problems experienced on Athos by would-be monks, novices, and pilgrims from the communist countries. He mentioned that the situation of the Russian monstery of St Panteleimon was particularly acute and that it was so reduced in numbers that it was closed to visitors. 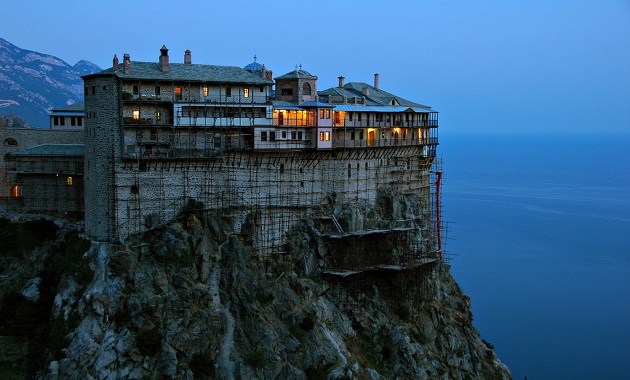 I had then recently returned from my first visit to Athos where my experience of the Russian monastery was slightly different from his, namely that the house was not closed but full. I wrote a letter about this which was duly published and a few weeks later I received a telephone call from Derek. He was painting Nicholas Ridley, a politician who lived near me in Gloucestershire, so he asked if we could meet and talk about Athos. I still have the notes that I made of that conversation, during which I think I suggested that there ought to be a society of Friends of Mount Athos. ‘Brilliant idea!’, exclaimed Derek; ‘we must do it. But we can’t do it without Bishop Kallistos.’

Over the following months a few informal meetings took place in London and Oxford as the three of us started to organize ourselves, and at a meeting in November 1990 we agreed a draft constitution, a press release, and a membership application form and pronounced ourselves a society. We formed an Executive Committee, of which the historian Sir Steven Runciman agreed to be President, Bishop Kallistos Chairman, and I myself Secretary. Derek always protested, ‘I’m only an artist. I can’t do anything!’ But he served on the committee, where his influence was considerable, and his network of friends was a great benefit to the society in its early days.

Of course Patrons don’t actually do anything either. All the work is done by the Executive Committee; and as the membership has grown, and with it the range of our activities, so has the size of the committee. Sadly both Derek Hill and Steven Runciman died in 2000 and since then Bishop (now Metropolitan) Kallistos has served as both President and Chairman. The Executive Committee as a whole now numbers nine, of whom six are Orthodox. We work together as a team, though each of us has a particular area of responsibility, which might be the footpath project, or events, or finance, or pilgrimages.

We meet four times a year, usually three times in Oxford and once in London. It helps to be able to circulate documents by e-mail in advance of meetings and this enables us to get through a longish agenda in not much more than two hours. We have an AGM in the summer which since 1996 has been held at St Anne’s College, Oxford. In order to encourage members to attend, we turn it into an all-day affair with two or three talks on themes related to Athos.

“P”: How many members does the society have? From which countries do they come?

Dr G.S.: The society published its first ‘Annual Report’ in 1991 to which the President contributed a Foreword. ‘This is not a society that aims at producing sensational results’, he wrote. Nor did we expect to recruit very many members, though Sir Steven went on to say, ‘I hope that we shall be joined by everyone who has a respect, a sympathy, and an admiration for that most beautiful of peninsulas and its holy way of life.’ But rather to our surprise quite a few people started to join, and by 1993 we had nearly 200 members, including HRH The Duke of Edinburgh; and the next year we were delighted that HRH The Prince of Wales accepted honorary membership, no doubt through the good offices of Derek Hill as they used to paint together and had become friends. We were greatly honoured that in 2012 he agreed to become our Royal Patron.

Initially most of our members came from the United Kingdom, since that was where it all started, but from the early days we have always had a number from Greece and from North America. By 1997 we were receiving so many applications from people in the USA and Canada that we decided to appoint an American Membership Secretary and he is still in post. Now we have about 930 members worldwide, of whom about 500 are in the UK, 250 in North America, and the rest spread across Europe and the rest of the world. From these other countries we have the highest number (27) from Greece, 19 from France, and 11 each from Australia, Belgium, Italy, and Switzerland. We are open to all, men and women, of all faiths and none. I think fewer than half are Orthodox!