“P”: What are the society’s main activities?

Dr. G.S.: We have a regular programme of meetings. We always mark the start of the new year in traditional Greek style with a Vasilopitta Party. This is held in London, currently at the Society of Antiquaries in Piccadilly. This year Archbishop Gregorios cut and blessed the pittas and we listened to some singing by members of the Mosaic Choir. 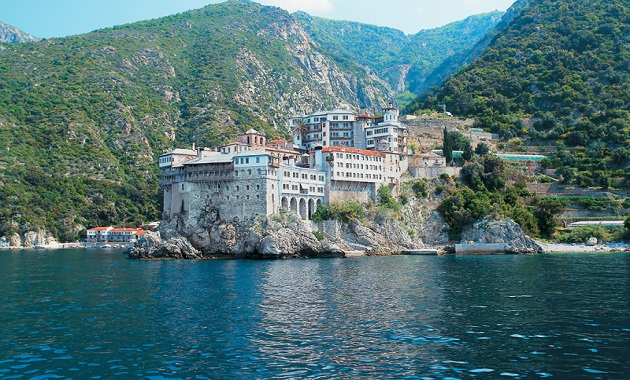 I have already mentioned the AGM which is always held in Oxford. It takes the form of a one-day conference, in the course of which two or three invited speakers address the members. This year the speakers were Fr Douglas Dales, who used to be Chaplain of Marlborough School and who spoke about Anglican pilgrimage to the Holy Mountain; Phaidon Hadjiantoniou, a conservation architect who has done a lot of work with KEDAK, and he spoke about the architecture of hermits’ cells in remote parts of the Mountain; and Frances Jennings, who is the wife of our Treasurer, and she gave an illustrated talk about last year’s pilgrimage to the monasteries of Serbia, Kosovo, and Montenegro. I’ll say aomething about the pilgrimages in a minute.

In the autumn we usually meet again in London for a service of vespers in the Romanian church in the Strand followed by a reception and a talk by an invited speaker. The speaker at the last autumn meeting was Professor Paul Magdalino, Emeritus Professor of Byzantine History at the University of St Andrews, and he spoke about monasticism in Byzantine Constantinople. Metropolitan Kallistos usually chairs all our meetings and also serves the Divine Liturgy on the day of the AGM.

In alternate years the society holds a residential conference over a weekend in February or March, usually at Madingley Hall which is a grand country house near Cambridge. This year’s conference was on the theme ‘Spiritual Guidance on Mount Athos’ and we listened to seven talks given by monastics based in the UK, in Greece, and in Russia. There were about seventy delegates who came from all over the world. We hope to publish the proceedings in book form in due course. The next conference will take place in 2015 and will be held in honour of our President, Metropolitan Kallistos, to mark his eightieth birthday.

Every spring the society sends a party of about twenty volunteers to the Holy Mountain to clear footpaths and mule-tracks for the benefit of pilgrims. This programme has been going for about twelve years and was originally an initiative of The Prince of Wales. He had noticed that many of the paths were falling into disrepair through lack of use and that they were often being obliterated by the construction of new roads. It was his idea that we should do something about this and, whenever he can, he joins the party to work alongside them for a day. Accurate path descriptions are now posted on our website, new signposts have been erected at strategic points on the Mountain, and it is pleasing to note that more pilgrims are now using the old paths than was the case ten or fifteen years ago.

Also every year, in the late summer or autumn, the society organizes a pilgrimage for a week or ten days to an area where there are Orthodox monasteries or churches worth visiting. The pilgrimage leader is usually Metropolitan Kallistos and we generally take thirty or forty people. Destinations have included Greece, Russia, Finland, Romania, Egypt, Turkey, Georgia, and most recently, as I mentioned, Serbia. We also run a one-day pilgrimage to the monastery of St John the Baptist at Tolleshunt Knights in Essex, which was founded by Fr Sophrony and is the chief centre of Orthodox spirituality in the UK.

From time to time the society launches an appeal on behalf of an Athonite community that has a particular need. For example, when the monastery of Hilandar suffered a disastrous fire in 2004 and lost half its buildings, we launched an appeal to raise funds towards the rebuilding and we have so far been able to send them about 100,000 euros. We are not primarily a fund-raising society but we do try to respond positively whenever we receive a request for assistance from the Mountain.

“P”: How do western people see the society’s work?

Dr. G.S.: The work of the society is probably most clearly seen through its publications. Every year we publish an Annual Report which is really like a magazine or journal containing articles and book reviews on topics related to the Holy Mountain. There is always an account of the society’s activities during the past year which I write. There is a ‘Report from the Mountain’ compiled by one of our members who lives in Thessaloniki and who has his ear to the ground on Athos. And we sometimes print versions of talks that have been delivered at meetings in the course of the year. The whole thing usually runs to about 100 pages.

We also publish a Pilgrim’s Guide to Mount Athos which is now in its fourth edition and aims to provide up-to-date information for people planning a pilgrimage to the Mountain. This is distributed free to members when they join, but we receive requests for copies from all over the world.

The society’s website (www.athosfriends.org) provides comprehensive coverage of all our activities, including membership details, and most of our new members probably reach us that way. We also have a page on Facebook.

Most of our book publications consist of conference proceedings, though we have sometimes been asked to help with translations of works of Athonite spirituality which probably reach a wider readership.

The image that we aim to project of ourselves is that of a bridge between Athos and the world, with traffic going in both directions. We are here to assist pilgrims and would-be pilgrims and to provide information about the Mountain and its history; but we are also here to assist the monks whenever they need us. We have a policy of never interfering until we are invited; but once we are asked, we will try to do everything we can to help.

“P”: How do western people see the Holy Mountain today?

Dr. G.S.: That is a difficult question because for most people in the West the Mountain probably is of little concern. For the Orthodox of course it is a different matter and for them it is of immense importance. I think it took a bit of a knock recently as a result of the so-called ‘Vatopedi scandal’ and that will take a while to die down, particularly if there are to be further court cases. But even that was not much reported here and most people think that Greece has more important things to worry about right now.

The other issue that occasionally raises its head in the West is the avaton, thanks to the vociferous minority in the European Parliament who demand that the Mountain open its borders to women. So far the monks have been successful in asserting their ancient privileges and rights of seclusion, but this is something that will not go away and there may well be more battles to be fought in the future. We need to be ready to help fight them.

Meanwhile we do our best to promote the image of the Mountain as the spiritual heart of Orthodoxy and a treasure of incalculable value that must be defended at all costs. That is really what we are here to do and I think most of our members would agree with that.

“P”: In what ways do you co-operate with the fathers of the Holy Mountain?

Dr. G.S.: We send our Annual Report to every monastery and many of the sketes on the Mountain, so I hope that they are all at least aware of our existence. Otherwise the footpath project probably brings us into contact with more monasteries than anything else. So far these have included Vatopedi, Hilandar, Zographou, Konstamonitou, Koutloumousiou, Pantokrator, Simonopetra, and Dionysiou, and there may be others that I have not mentioned.

We have brought abbots and monks from several monasteries to the UK to speak at our meetings and conferences and to attend receptions given by HRH The Prince of Wales either in London or at Highgrove, his country house in Gloucestershire. We hope that more of them will agree to come as there is no better way to demonstrate what is happening on the Mountain today.

We have supported one or two fathers who wished to spend a period of study in the UK. One is currently writing a doctoral thesis in theology at Oxford, for example, and we have made a contribution towards his living expenses.

Earlier in our history we were asked on more than one occasion to support the monks when their sovereignty was threatened. In 1994, for example, Constantinople interfered more than was right in the internal affairs of the Mountain and went so far as to depose one abbot and the representatives of several other monasteries to the Holy Community. At the specific request of the fathers we published articles in the British press protesting at this high-handed behaviour and we have reason to believe that our action had some effect.

More recently we protested at the pre-trial imprisonment of Abbot Ephraim of Vatopedi just before Christmas in 2011. We were not taking sides in the case, but we felt that the way he was being treated was wrong and we said so. We were delighted when eventually he was released but we remain frustrated that he is still unable to travel outside Greece. We have formally invited him to come to England, principally because we would like him to speak to the society, but also because we hope that the invitation may facilitate the lifting of this restriction on his movements.

I could go on, but I hope that I have said enough to show that there is indeed traffic in both directions across our bridge and that the work of the Friends is valued both by our members and by the fathers.