We were made with two natures: the material and the spiritual. With dust from the earth, God made our material body and, with His breath, He breathed the soul into that body. Body and soul are joined without division, with no prioritization or conflict between them. The body assumes the important role of the temple of the spirit, rather than being a place for its confinement, as is the case with non-Christian philosophy. The soul, in turn, is given to us as being bodiless, rational and immortal. Body and soul are made by the Creator to live and work together in complete harmony. In this way, the purpose of our existence can be fulfilled, which is that we are able to live in the eternal bliss of the presence of God. 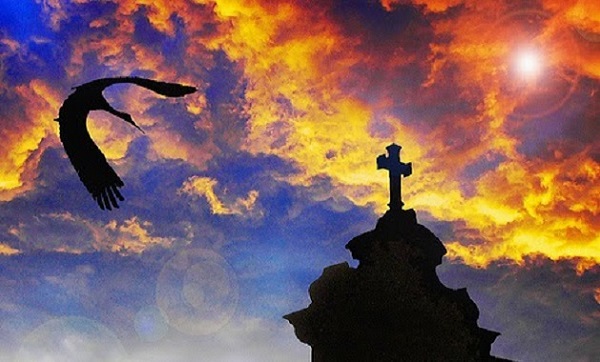 Sin, however, brings rivalry between the body and the soul. With the fall of Adam and Eve, spiritual death arrived, that is the mortification of the spiritual faculties of our soul because of our alienation from and lack of communication with God. As Saint Basil the Great aptly puts it, ‘God is life, and deprivation of life means death’. Through the spiritual death of our ancestors, we have inherited sorrow, evil and corruption. So the death of the body comes as a consequence of that of the soul. The soul is separated from the body, which decays and is dissolved. The soul retains its characteristic of immortality, which it received by Grace.

Our merciful God, however, didn’t allow bodily death to come to our ancestors- nor to the whole of the human race- at the same time as that of the soul. In this way He prevented His creation from falling into despair. He gives us time to repent. The same purpose is served by the sorrows, adversities and trial of life on earth. God has also allowed death to infiltrate into human life, not in order to punish us, but to bless us. Even though death wears the mask of evil, it manages to shorten our sojourn in our sinful state. Therefore, as Saint Gregory the Theologian puts it, the death of the body plays a part in preventing the prolongation of evil.

The Lord’s goodwill and compassion are obvious not only from the above, but also from the fact that Christ has given us the hope of resurrection. In fact, the first rays of hope were given at the very moment when our ancestors were cast out from Paradise. Nevertheless, death remained the most repulsive and terrible event, event for the righteous, since, after death, all souls were brought down into Hell. But the goodness of the Lord wouldn’t leave us helpless, at the mercy of decay and extinction. According to Florovsky, divine help is a concomitant of divine love. So the incarnation of the Divine Word begat the hope of the salvation of the soul which came to fruition with Christ’s Resurrection.

Christ defeated death though the Crucifixion, His three-day descent into the nether world and His glorious Resurrection. The Lord’s voluntary sacrifice on the Cross has given the opportunity for redemption to everyone, without exception, not on a temporary basis, but eternally. According to Saint John Chrysostom, sin is the mother and nurturer of death. So Christ, our sinless and good Saviour, looses this bond between sin and death and completely disarms death. His spotless Body can’t be held by the chains of death and does away with the laws of corruption.

The first Adam transgressed against the Lord’s commandment and the result of his disobedience affects us all. He condemned the whole of the human race\to a state of sin. Christ, the new Adam, obeys His heavenly Father even unto death- a most shameful one- and in this way achieved the restitution of disobedient humanity. Just as our condemnation came from one person, so the opportunity of salvation is offered, through the God Who became human, to all those who believe in Him. In this way, the path to heaven is opened, our hope is confirmed, optimism and joy abound and we’re given the means to overcome death.