While it may be true that history doesn’t repeat itself, it is also true that human beings do. Each generation, each person, is born into the same spiritual state as the generations who have gone before. It’s true that a child will benefit from a loving environment, a good education and a proper formation in the faith, but that child’s children will not directly inherit any of this; the process needs to be started afresh. That said, similar circumstances will tend to produce similar results. The persecutions in the Late Roman Empire did not directly produce martyrs: the martyrs- ‘witnesses’- suffered because they felt obliged to testify for their faith. Had they not, had they succumbed to pressure to worship pagan idols, they wouldn’t have been martyred The same was true in, for example, the Soviet Union in the 20th century and appears to be true now in the Middle East.

Another example might be the turbulence which normally characterizes the formation of a new state. The end of the Old Roman empire, for instance, and the rise of New Rome (Constantinople), or the shaping or a more unified polity in Russia under Saint Vladimir. 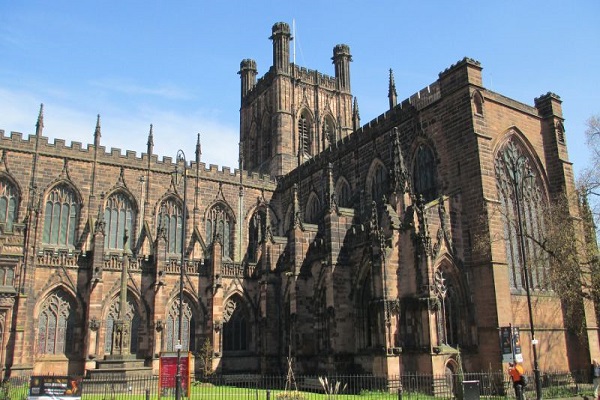 At such times, it’s natural for leading figures or families to emerge to take control of whatever institutions exist. When this was linked to the establishment of Christianity, these people were also called upon to live in a God-pleasing manner and some of them have rightly been recognized as saints: in New Rome, Saint Helen and her son, Saint Constantine; in Russia, Saint Vladimir and his sons Saints Boris and Gleb; Saint Stefan and Saint Savva in Serbia and so on.

A somewhat similar situation obtained in Britain in the 7th century. Everybody was fighting everyone else: Angles, Saxons, Jutes, Scots (i.e. Irish), Brythons (i.e. Welsh) and Picts (i.e. natives of Scotland), with occasional Viking raids thrown in for good measure. It wasn’t even as though all the Angles (or Saxons, Jutes, etc.) were united among themselves. Not at all. Everybody lashed out at all and sundry, seemingly at random, like cats in a sack.

One of the leading figures in this mayhem was King Penda of Mercia (roughly the English Midlands), a man of wrath if ever there was one. He fought his way onto the throne in 628 and then fought himself off it in 655 when he was killed at the Battle of Winwaed. This effectively marked the end of Anglo-Saxon paganism.

Before going on, we need to go back a few years and move to Kent, the cradle of English Christianity. The King there, Eorcenberht, was married to Queen Sexburga, who had three sisters, two of whom were abbesses. One of these sisters, Aethelthryth (our name Audrey), founded an Abbey at Ely and was Abbess there. Sexburga and her husband had a daughter, Ermenilda, who married the son of the King Penda we mentioned above.

These two also had children, one of whom was a daughter, Werburga. We need not believe accounts of her beauty, since we have no idea what she looked like, but we may wish them to be true. Be that as it may, it’s certain that, as the rich daughter of a powerful king, she would have had many suitors no matter what she looked like. Her parents took their responsibilities to their children seriously, however, and they were all given an upbringing in the faith and one aimed at preparing them for their future duties. Part of Werburga’s education was supervised by Saint Chad and it probably came as no great surprise that she rejected her suitors and decided to enter the convent in Ely, where her aunt, Aethelthryth, had been joined by her grandmother, Sexburga. When Werburga’s father died, her mother also became a nun at the monastery in Ely, together with her mother, sister and daughter! On the death of Saint Aethelthryth (Audrey), she was succeeded as Abbess by her sister, Saint Sexburga, who was succeeded by her daughter, Saint Ermenilda, who, in turn, was succeeded by her daughter, Saint Werburga. As we’ve already said, it makes sense that these women became the Abbess of the convent, because of their powerful connections and because they were trained in the administration of large households. But this doesn’t explain their decision to become nuns in the first place. Quite apart from all the bloodshed, ordinary life in 7th century English must have been extremely harsh. No doubt, for some of the nuns, material life in a convent would have been an improvement: clothing, food, a modicum of warmth, relative safety. But this would hardly have been the case for a queen. It’s no accident that these four women are held in such high regard and are acknowledged as saints in the One Holy Catholic Church, since they sacrificed so much to serve the Lord.

In Mercia, for example, Ermenilda’s son, Coenred, was too young to reign. Might it not have been easier for her to remain at court and oversee his upbringing? Perhaps exercise an influence on matters of state? Instead, she preferred to enter a convent and see the crown pass to her husband’s brother, Ethelred. At Ethelred’s behest, Werburga left the abbey at Ely to become, for a while, a sort of inspector general of all the women’s monasteries in his kingdom. He provided her with ample funds and she was able to found other convents. After a reign of twenty-nine years, Ethelred abdicated in order to become a simple monk (though he was later elected Abbot).

His successor was Coenred, son of Saint Ermenilda and brother of Saint Werburga He reigned in an exemplary manner for five years, then abdicated, went to Rome and was tonsured a monk by the Pope.

According to the Rev. Alban Butler (1711–73), who is the source of much of our information: ‘St. Wereburge, both by word and example, conducted to God the souls committed to her care. She was the most perfect model of meekness, humility, patience, and purity. Besides the church office, she recited every day the psalter on her knees, and, after matins, remained in the church in prayer, either prostrate on the ground, or kneeling till day-light, and often bathed in tears. She never took more than one repast in the day, and read with wonderful delight the lives of the fathers of the desert. She foretold her death, visited all places under her care, and gave her last orders and exhortations. She prepared herself for her last hour by ardent invitations of her heavenly bridegroom, and languishing aspirations of divine love, in which she breathed forth her pure soul on the 3rd of February, at Trentham, about the end of the seventh century’.

When her cousin, King Coelred, Kenred’s successor, ordered the exhumation of her body in 708, it was found to be incorrupt. Because of the threat from Viking raids, her relics were removed to Chester and since then she’s been the patron saint of that city. Among other churches dedicated to her, there is one in a village in Zimbabwe.