Now because God was about to fashion people from the visible and invisible creation in His own image and likeness to reign as monarchs and rulers over all the earth and everything that therein is, He first made for them, as it were, a realm in which they should live a blessed and blissful life. And this is the divine paradise, planted in Eden by God’s own hands, a veritable treasury of every joy and gladness. For the word “Eden” means enjoyment. Lying in the East and higher than all the earth, it had a temperate climate and basked in a breeze that was the purest and most gentle, with evergreen plants redolent with scent, inundated with light, surpassing every concept of seasons of the year and beauty. Truly a divine place and a worthy habitation for those who were made in the image of God, in which no unreasoning creature ever dwelt, but only people, the work of God’s own hands. 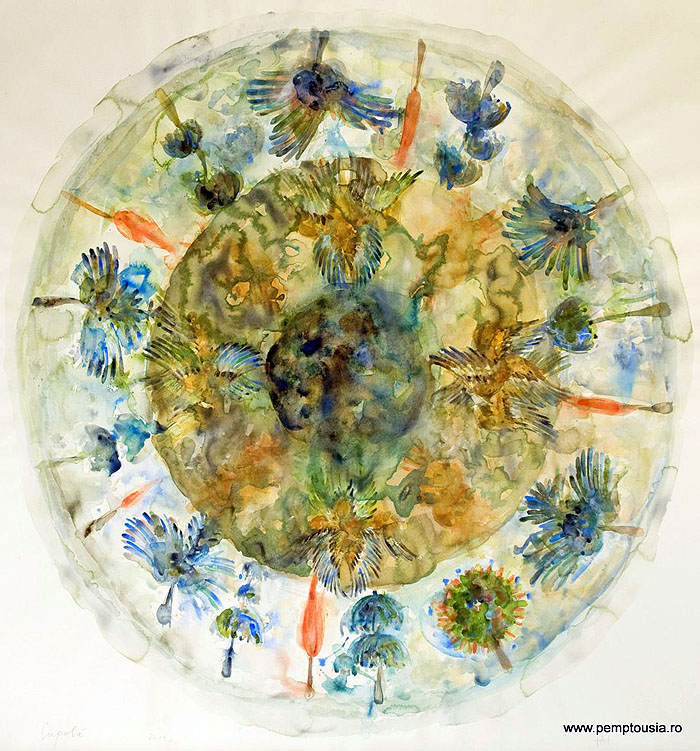 The Paradise of Adam. Watercolor by Angela Hanc, 2011

But this is where Adam went wrong. He tasted and then knew that he was naked, so he made a covering for himself, using fig-leaves to gird round himself. Before they tasted the fruit, Adam and Eve were both naked and were not ashamed. God meant that we should be without passion, because this nakedness was completely devoid of passion. And, in fact, He meant us to be free from all care whatsoever and to have just one task to perform: to sing, as do the angels, without let or hindrance, the praises of the Creator, and to delight in contemplation of Him and to give Him charge of all our cares. This is what He proclaimed to us through the Prophet David when He said: “Cast your burden on the Lord, and He will sustain you”. And, again, in the Gospels, He taught His disciples saying, “Take no thought for your soul, what you shall eat, nor for your body what you shall wear”.

And again, “ First, seek the Kingdom of God and His righteousness and all these things shall be added unto you”. And to Martha He said, “Martha, Martha, you are careful and troubled about many things. Only one thing is needful; and Mary has chosen that good part, which shall not be taken away from her”, meaning, clearly, sitting at His feet and listening to His words.

The tree of life, on the other hand, was a tree which had life-giving force, or was to be eaten only by those who are worthy of life and are not subject to death. Some people have pictured Paradise as something tangible and perceptible, while others have viewed it rather as a concept. But it seems to me, that, just as people were created with senses and also with a mind, in a similar fashion our most holy temple combines the senses and the mind, and has this twofold emphasis: for, as we’ve said, [Adam and Eve’s] life in the body was spent in the most divine and exquisite region, while life in the soul was passed in a place incomparably superior and of even more surpassing beauty, the realm where God is our home, and where they were enveloped with Him as it were with a glorious garment, and robed in His grace.

Their delight was to gaze upon His face and they were sustained by this uniquely sweet fruit which nourished them as if they were angels. This is why it was rightly called the “tree of life”: because the sweetness of communion with God is imparted to those who participate in the life which is not cut short by death. God named this “every tree” and said: “You  may eat of every tree in Paradise”. Because He Himself is the “every” in Whom and through Whom all things are maintained. 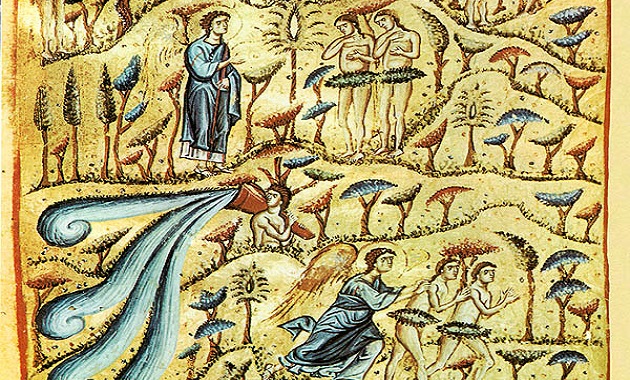 But the tree of the knowledge of good and evil was for the discrimination between the many divisions of observation. This is the knowledge of one’s own nature, which, indeed, is a good thing for those who are perfect and pass their days in divine contemplation, this being of itself a proclamation of the magnificence of God. People such as this have no fear of falling, because, over time, they have reached a certain stage in this contemplation. But it is not good for the young or for those who give in easily to their desires, because concern for their bodies tugs away at their attention and distracts them, because as yet they are not securely seated in the one and only good and still do not have a firm grasp of what is superior.

So the way I see it is that divine Paradise is twofold. And the God-bearing Fathers have passed down to us the truth, whether they taught one meaning or the other. Indeed, it is possible to understand by “every tree” the knowledge of the divine power derived from created things. In the words of the divine Apostle, “For his invisible attributes, namely his eternal power and divine nature, have been clearly perceived, ever since the creation of the world, in the things that have been made”. But of all these concepts and observations, the most important is the one which refers directly to us, to the way we’ve been made. As the divine David says: “The knowledge of You from me is a miracle”, that is [knowledge of God] from the way we are constructed. Such knowledge, as we’ve mentioned, was dangerous for Adam, who had been so recently created.

Or should we understand the “tree of life” in the more profound concept of God which originates in all created things and which leads us to the Creator, the Origin and Cause of all beings. This is what He called “every tree”, meaning the fullness and unity which is provided for us through participation in the one God. The “tree of the knowledge of good and evil”, is tangible and pleasurable food which, sweet though it seems, in reality means that those who consume it come into communion with evil. For God says: “You may eat of every tree in Paradise”. It seems to me that this is God saying: “Through all My creations, ascend to Me, your Creator, and of all the fruits, pluck one, that is Me, Who am the true life.

Let every thing bear for you the fruit of life, and let participation in Me be the support of your being. For in this way you’ll be immortal. But of the tree of the knowledge of good and evil, you shall not eat: for on the day that you eat of it, you shall die”. For tangible food is by nature a replenishment of that which is expelled and passes into the sewer and is lost. And it is impossible for those who consume tangible food to remain incorruptible. The “tree of life” is participation in God, which is what nourishes the angels and through which we were meant to enjoy incorruption. We should first submit, without discrimination, to the law of God, so that we may attain the perfection of virtue and thus receive from God the gift of discrimination between good and evil, which is the “tree of the knowledge of good and evil”.

Saint John the Damascan, An Exact Exposition of the Orthodox Faith