“Imitate me, just as I also imitate Christ,” St. Paul wrote in his First Epistle to the Corinthians (11:1).

The most excellent way to follow the Apostle’s prescription is to practice Christ’s own words recorded in the Gospel of John: “If you love Me, keep My commandments” (14:15).

Those who most excellently follow His commandments after the Birth-giver of God, the Most-holy Theotokos, are His saints, known and unknown.

Saints are an integral part of the Orthodox Church: St. Clement of Rome writes, “Cleave to the saints, for they who cleave to them shall be made holy,” while St. Ephraim the Syrian adds, “Blessed is he who plants in his soul good plants, that is, the virtues and the lives of saints.” 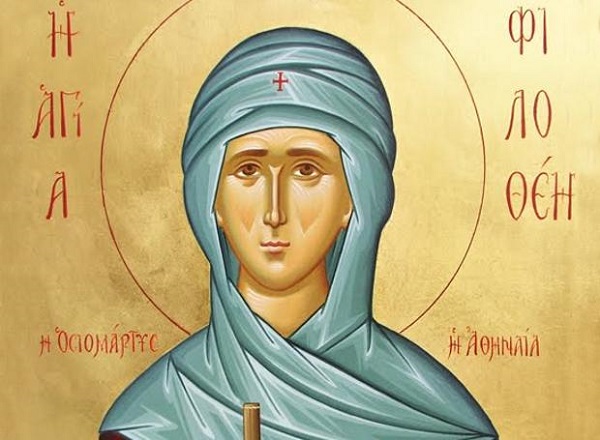 Reverence for saints (not worship, which belongs to God alone) is closely connected with the veneration of their holy relics and icons. It is the saint, through their glorification by God who continues the Christian Truth and who helps the faithful by their intercessions to Him.

On February 19th the Church celebrates the memory of Saint Philothei the Righteous Martyr of Athens.

Born into an aristocratic family in early 16th century Athens, St. Philothei’s birth was itself a miracle: her mother, a barren woman named Syrigi, had her fervent prayers for a child answered by God after many years. Her birth embodies what St. James the Just wrote in his Epistle: “The effective, fervent prayer of a righteous man avails much” (5:16).

From childhood, the Saint showed a devout disposition, even in the face of a short-lived marriage to a tyrannical husband who died shortly thereafter.

St. Philothei’s life was one of ascesis (disciplined spiritual exercises/struggle), in contrast to today’s passion for indulgence.

St. Philothei’s life was one of prayer and contemplation, in contrast to today’s impulsive consumption and self-glorification – selfie was the Oxford Dictionaries Word of the Year 2013.

St. Philothei’s life was not only inwardly holy, however; her actions followed Christ’s words, again from the Gospel of John: “By this all will know that you are My disciples, if you have love for one another” (13:35).

She showed her love for others, for example, by distributing her substantial inheritance for the betterment and freedom of her Greek brothers and sisters suffering under Turkish occupation.

She founded monasteries, hospices, schools for girls and boys of Athens and also provided endowment of estates in order to scale her charity for the progress of many.

While some of the world’s ultra-wealthy have become great philanthropists, global economic inequality continues down a troubling trend. Oxfam International released a briefing paper in late January titled Working for the Few, which, among other things, points out the following:

The bottom half of the world’s population [~3.5 billion people] owns the same as the richest 85 people in the world and… In the US, the wealthiest one percent captured 95 percent of post-financial crisis growth since 2009, while the bottom 90 percent became poorer.

St. Philothei’s humble life, along with her philanthropy and compassion towards the poor and sick were a source of heavenly blessings, leading many by the “narrow gate” to the Kingdom of Heaven. She herself acquired the grace of working miracles.

She was eventually imprisoned and, after her release, was taken from her Monastery during a vigil and beaten, suffering a Martyr’s death and entering into eternal rest in the Lord on February 19, 1589.

The Synaxarion records the following about St. Philothei:

Scarcely twenty days had passed before a lovely scent began to issue from her tomb. Her precious relic, which is venerated to this day in the Cathedral of Athens, has remained incorrupt for the glory of God and the consolation of the Christian people.

Closer to North America, she is the patron saint of the Greek Orthodox Metropolis of Toronto (Canada) National Philoptochos.

By imitating Christ, following His commandments and being a selfless almsgiver, Saint Philothei the Righteous Martyr of Athens provides faith, hope and love to the faithful 400 years after her death and serves as a true role model.