Saint Photius: The Miracle and the Primacy of Truth

Saint Photius was the chosen vessel of God in his times. He was, in other words, the outstanding, genuine bearer of Tradition and for that reason was the most famous and therefore the most significant theologian of the period. His outlook and his theology were an expression of the being of the Church and the result of enlightenment by the Holy Spirit. 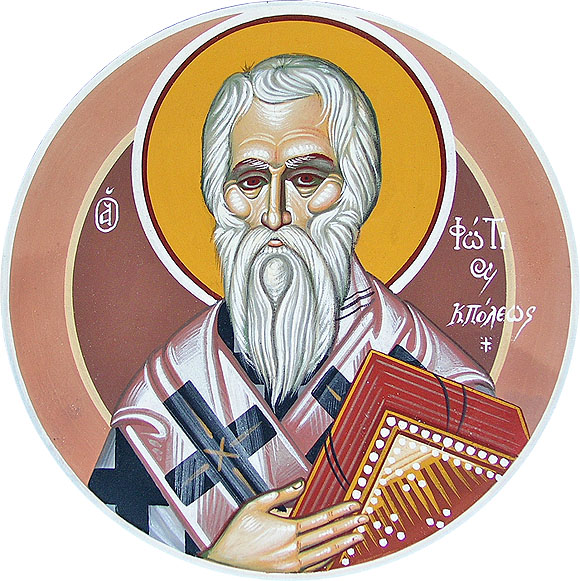 This fact, which is not so common as we would like in the Church, has warmed the hearts of the faithful to Photius over all the centuries since, and has made him a symbol and beacon of the truth.

It is proper, therefore that the Church has decided to celebrate his memory (6th February) in a special way, with particular emphasis. In this way, we have the opportunity to realize the dimensions of, the profound meaning of, the feast.

Today we honour a holy man of the Church, we honour the saint, who differs from the great cloud of saints, witnesses and the blessed. The latter were sanctified through martyrdom, which the faithful of the time wondered at, through their exceptionally virtuous lives and through their ascetic struggle and visions of God. All of these became signs which underscored their sanctity which functioned and continues to function in the spirit of the faithful as model and momentum, as an example and proof of our truth.

In the new reality, that is in the Church, the martyrs and saints took the place of heroes and models. And this was because they embodied more than others the ethos of the Church and sacrificed their lives for it. Even more, the saints and martyrs often sealed and continue to seal their superiority to other people by performing miracles.

At all times, in all places the Church has known and knows countless miracles, apart from the miracle of miracles, its Divine Eucharist, which is repeated thousands of times all over the earth. The miracles of the saints show how small and how great humankind is. So the miracle, as a blatant abrogation of natural and spiritual reality, was kneaded into the life of the Church and is stunning proof of the sanctity of its saints, which, for centuries now, it has honoured daily.

But behold how tonight and tomorrow we are honouring a saint who does not bring to our minds the Roman persecutions and martyrdom. We do not honour Saint Photius for his many miracles: we do not know if he healed the lame and the blind; if he consoled people in pain; if he appeared to the faithful after his demise to advise, support, or encourage them.

And though this is all true, Photius is admirable and great. So the miracle is to be found elsewhere. It is in the truth he expressed in his theology, in his struggles for the Church. He does not have wonder-working icons, but he has wonder-working truth in his works.

The faithful are not accustomed to seeking comfort from Saint Photius, but they have become accustomed and must be accustomed to seeking the truth. His miracle is his truth. This is his uniqueness, his greatness. The miracle of manifesting the truth is a mightier miracle than other ones and in particular it is difficult to contemplate, to understand. Those who are unprepared do not recognize it for what it is. Those who have not learned to care as much for the truth as they do for their bodies do not understand.

And yet, the manifestation of the truth to people is God’s greatest intervention. With His uncreated energies, the Holy Spirit breaks through the barrier of human relativity, parts the veil of secularity and makes people capable of contemplating, of experiencing the truth more deeply and broadly and then of expressing this terrible and divine experience.

This is precisely the miracle of the truth. This is precisely what happened to Saint Photius and why we are honouring him today, as the Church honoured him in the past and will continue to do so in the future. Just how significant the miracle of truth and how great the teacher who contributed to it are is clear from this simple fact: you can be saved even if your body is crippled; you cannot be saved however, if your faith is severely crippled, if you lose the truth, if you do not have genuine truth, if you doubt it. And this is so because salvation, deification, beatification mean participation in the divine reality. People with wrong beliefs however, are delusional, they think they have the truth when in fact they have nothing and so they are not brought to salvation.

This outstanding teacher of the Church, as the genuine voice of truth, has contributed to the salvation of people, has participated in the task of the divine design for salvation and this is why he, who became Patriarch of Constantinople in 858, is considered a saint.

This holy man challenged the evil of false faith and the Eastern Church, through his struggles and theology preserved its purity, which had been in grave danger from the bishops of Rome and the Frankish theologians. The Popes of Rome, imbued as they were with secular concepts, adulterated the fact and the institution of the Church. And they attempted, through Pope Nicholas I (858-867) to introduce this adulteration, this ecclesiological sickness, by force into the Eastern Church.

When the Church of Rome sought the primacy of authority, when it sought jurisdiction over another Patriarchal Church, this meant that it was not living the fact of the Church in a proper manner, that the undefiled mystical body of Christ had been damaged. Photius’ reaction, his robust and deeply theological struggles were justified because they were an attempt to manifest the genuine structure of the Church. Inspired by the anti-ecclesiastical claims of Rome, Photius demonstrated and underlined the nature of the Church.

The significance of his struggles does not lie merely in the fact that the newly-constituted Church of Bulgaria did not, in the end, come under Roman jurisdiction, nor that they showed that the Pope did not have the right to intervene authoritatively in the theme (province) of the East, and, therefore, in matters of any local Church. What is fundamental is that the theology concerning the Church, the theology which began with Ignatios the God-bearer and was now widened by Photius, took on new dimensions.

In a final and impressive analysis, Photius expressed and salvaged the notion of the local Church, particularly in relation to other local Churches. The primacy of authority sought by the Roman Church did great damage to local Churches. Local bishops were, to some extent, reduced to administrative organs, that is they were not “in place of God the Father”, as Ignatian theology had it, as the Eastern Church accepted it and as Photius correctly understood.

The enormous significance of the problem can be understood when you consider that the Church has two fundamental poles; “Eucharistic realism” and the theology of the bishop. For those outside our Church, these two poles- sometimes one, sometimes the other or even both together- scandalized, continue to scandalize and are strongly opposed. Precisely because there is no Church without the real Eucharist or without a real bishop to celebrate it.

In the context of the ninth century, as later, the Popes essentially attempted to shrink the true dimension of the episcopacy. Photius’ work, however, nullified their plan and so, in the East, the office of bishop has spiritual dimensions, created by Christ, the head of the Church.

The other aspect of Photius’ great theological contribution is in the field of Trinitology and Pneumatology. The Frankish theologians, without a powerful Orthodox tradition and the Roman theologians, on doubtful theological grounds, taught that the Holy Spirit also proceeds from the Son. They taught the Filioque which some of them, particularly the Franks, added to the Creed.

The Eastern Church felt that, through this teaching, faith in God the Father was being adulterated, since we accept Him as the source of the other two persons. In other words, with this new teaching, consciously or unconsciously, the sources, the beginnings, of the persons became two, the Father and the Son, which cast doubt on the unity of the Trinity and the consubstantiality of the Spirit as regards the Father and Son.

The Filioque, then, was not genuine theological progress, but a partial subversion of the faith of the Church, which until then had been acquired and expressed through dramatic struggles and by enlightenment from the Holy Spirit.

Saint Photius was able to show, in theological terms, the character of this innovative Western teaching, its mistaken basis and its subversiveness for what they were. With the aid of Tradition, brief study and the guidance of the Holy Spirit, he manifested the truth and thus it became clear that the Filioque does not stand up, it is not real, it is an imaginary truth and therefore puts at serious risk the salvation of those who accept it.

The consequences of this theology on the life and outlook of the faithful quickly became obvious: after the ninth century, the Orthodox Church had a clearer awareness than it had previously had of the manner of the precession of the Holy Spirit and was entirely certain that the Filioque was a false belief. Even the Westerners have since tried to interpret their Filioque in such a manner as not to adulterate Trinitology. This is due to Saint Photius, who, for this, too, acts in the Church as a  great Father and Teacher.

If we look at the person and theology of Saint Photius through a broader prism which will not distort either him or his contribution, then we shall make an observation of great significance.

While it was the Roman bishops who generally claimed primacy, the Church, Eastern and Western, then accepted, directly or indirectly, the position and theology of Photius. The Roman bishops sought to impose themselves, believing that they had the special authority to do so. They did not, however, have genuine truth to impose, and therefore no authority over other Churches. Photius, who had Tradition on his side, tried to manifest the truth as this was related to the problems of his day. He did not speak of authority; he laboured for the truth, which is the only thing that guarantees salvation. But the fact that the truth was given to Photius, who laboured for it, and not to the Popes, who sought authority, means that the view of Photius and not that of the Popes was worthy of adoption; believers ought to have the mindset of Photius, to live like him. It follows then that the rule in the Church is that truth is what counts, as is he who expresses it.

This is self-evident, because the ultimate measure and criterion in the Church is truth. Privileges and primacies depend solely on the truth. This is why there is no other form of primacy in the Church. There is only the primacy of the truth, which, in the ninth century was given by God through the person of Photius.

The primacy of truth, which we can see and follow in the whole historical course of the Church is not related to any place, because the Spirit breathes wherever He wills. It does not compromise with secular ambitions, with claims for privileges, because God is indifferent to those.

And particularly today, the Church, which is hovering between nominally “Churchy” groups, transitory traditional figures, contemporary problems on the one hand and the truth on the other, will win this spiritual battle of life and death only if it follows in the footsteps of Saint Photius, that is, if it lives its true Tradition, if it sacrifices itself for the problems of the time, if it demonstrates complete confidence in the enlightening Holy Spirit. Amen.