“Your father Abraham rejoiced to see my day, and he saw it and was glad”. Then the Jews said to Him, “You are not yet fifty years old, and have you seen Abraham?” Jesus said to them, “Most assuredly, I say to you, before Abraham was, I am”. (John 8:56-58) The Orthodox understanding of the Old Testament is rooted in three vital affirmations:

2)    The Old Testament speaks of Christ In this article, we will look at one of the earliest manifestations of God in the Old Testament: the appearance of three men to Abraham by the oak of Mamre. These three men have for some time been interpreted not as a manifestation of the Word (the Pre-incarnate Christ) but as a type of the Trinity, an idea that has been popularised by the famous icon of the Trinity by Rublev, which is adapted from an earlier icon of the Hospitality of Abraham. The appearance of the three men (commonly understood as angels) is described in Genesis 18:

“And the Lord appeared unto him in the plains of Mamre: and he sat in the tent door in the heat of the day; and he lift up his eyes and looked, and, lo, three men stood by him: and when he saw them, he ran to meet them from the tent door, and bowed himself toward the ground, and said, My Lord, if now I have found favour in thy sight, pass not away, I pray thee, from thy servant: Let a little water, I pray you, be fetched, and wash your feet, and rest yourselves under the tree: And I will fetch a morsel of bread, and comfort ye your hearts; after that ye shall pass on: for therefore are ye come to your servant. And they said, So do, as thou hast said… And the men rose up from thence, and looked toward Sodom: and Abraham went with them to bring them on the way. And the Lord said, Shall I hide from Abraham that thing which I do; seeing that Abraham shall surely become a great and mighty nation, and all the nations of the earth shall be blessed in him? For I know him, that he will command his children and his household after him, and they shall keep the way of the Lord, to do justice and judgment; that the Lord may bring upon Abraham that which he hath spoken of him. And the Lord said, Because the cry of Sodom and Gomorrah is great, and because their sin is very grievous; I will go down now, and see whether they have done altogether according to the cry of it, which is come unto me; and if not, I will know. And the men turned their faces from thence, and went toward Sodom: but Abraham stood yet before the Lord. And Abraham drew near, and said, Wilt thou also destroy the righteous with the wicked? Peradventure there be fifty righteous within the city: wilt thou also destroy and not spare the place for the fifty righteous that are therein?… And the Lord said, If I find in Sodom fifty righteous within the city, then I will spare all the place for their sakes. And Abraham answered and said, Behold now, I have taken upon me to speak unto the Lord, which am but dust and ashes:…Peradventure ten shall be found there. And he said, I will not destroy it for ten’s sake. And the Lord went his way, as soon as he had left communing with Abraham: and Abraham returned unto his place.”

What is interesting here is that Abraham addresses only one of the men as Lord. Clearly, ‘Lord’ here is not a mere address of respect, like ‘sir’, or otherwise he would have said ‘lords’, but it is a recognition that one of them is greater than the others. Furthermore, we read that two of the men depart and we are told that ‘Abraham stood yet before the Lord’. Moreover, I have employed for this passage a translation in old English grammar in order to convey the use of the second person singular (thou/thee/thy), which means that Abraham is addressing only one of the men.

This view is expressed by St Justin Martyr in the second century:

“Moses, therefore, that blessed and faithful servant of God, declares that the one who was seen by Abraham at the oak of Mamre was God, ac­companied by two angels, who were sent, for the condemnation of Sodom, by another, namely by the One who always remains above the heavens, who has never been seen by any human being, and who of himself holds converse with none, whom we term the Creator of all things, and the Father”. (Dial. 56)

The same view is held by Severian of Gabbala in the fifth century:

“Christ appeared to you, O excellent one, escorted by two angels, and by your hospitality you became a companion of God and of angels… Christ appeared to you in the appearance of a man, revealing to you the mysteries of his divine and saving sojourn on earth… Therefore you recognised God’s mediator, the Son who was to be known between two living beings”. (PG 56:546) Fresco of the Hospitality of Abraham, Church of Panagia Hrisokourdialiotissa, Cyprus, 16th Century

Origen also, although it has been suggested that the exegesis of the three men as a type of the Trinity began with him, saw in the narrative a manifestation of the Word accompanied by two angels:

“Notice first that with the two angels the Lord was present to Abraham, but it was only the two Angels who came to Lot”. (PG 12:184)

The Church historian, Eusebius, also describes the scene as a manifestation of ‘our Lord and Saviour’ accompanied by angels. He specifically says the figure in the middle was the most important and excelled in dignity. 12th century fresco of the Hospitality of Abraham, Monastery of St John the Evangelist, Patmos

The same is implied by St Romanos the Melodist in his Kontakion on the Holy Theophany:

“When God appeared to Abraham as he sat by the oak of Mambre, He was seen as a man but he did not know Him as he was, for he could not have borne it: but now for us it is not so, but in His own Person: for the Word has become flesh”.

“God appeared once to Abraham, but he in no way saw God: but we see Him, because He wills it, and we grasp the One Who appeared and enlightened all things”. (MT 6.4)

Procopios of Gaza in the sixth century tells us that the interpretation of the three men at Mamre had become three-fold in his day:

“Some people say they are three angels, others that one of them is God accompanied by two angels and others that there is a type of the Holy Trinity” (PG 12:184)

It would appear that the first to see a type of the Trinity in the narrative is St Cyril of Alexandria, who regarded the use of the singular as a reference to the oneness of the Trinity. But the earliest patristic commentaries see in the three men the Word of God accompanied by two angels.

While Rublev’s icon is theologically legitimate, seeing in the angels a symbol or type of the Trinity; another icon of the Trinity, which portrays the Father as the Ancient of Days and Christ as the Son of Man – with the Holy Spirit depicted as a dove on the basis of the account of the Baptism of Christ in the Jordan – is quite wrong (see my article on The Ancient of Days). God the Father is never once seen in the Old Testament:

“No one has seen God at any time; the only begotten Son who is in the bosom of the Father, He has made Him known” (John 1:18). This principle lies at the heart of the Greek patristic understanding of the Old Testament. 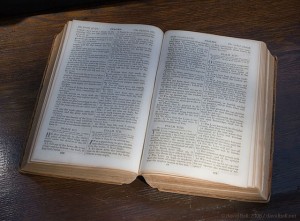 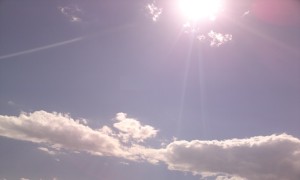 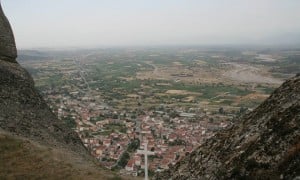 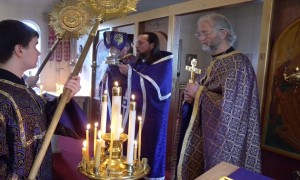 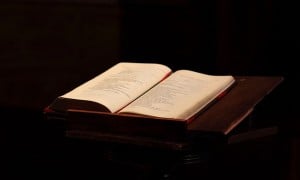