The Presentation and the Crucifixion

(Extract from a sermon preached at the University Church of Great St Mary’s, Cambridge, on 19 May 1985)

And then, lastly, two events which I would like to bring together. The Presentation of Jesus in the Temple and the Crucifixion. Every male child first-born of a woman was to be brought to the Temple as an offering. If we read back into the Old Testament about the institution of the act we discover that God commanded the Hebrews to bring the first-born male children of every family to the temple as a blood offering, as a ransom for the first-born of Egypt, who had to die that the Jews might go free. Every first-born male child was therefore brought and God had the right of death and of life upon him. Century after century God accepted a vicarious offering, turtle doves and sheep, and once only in the whole of history he accepted a human offering: his only begotten Son became man who had to die on the Cross to redeem mankind – so that the two events are really connected with one another. But the mother who brought this child knew that God had all power over him of life and death, and unhesitatingly, in humility and faithfulness, brought this child. 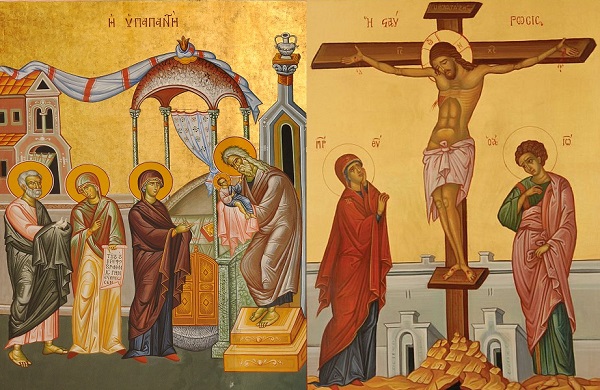 Later, when we see Calvary as described in the Gospel, we do not see a mother fainting or a mother protesting or a mother clamouring for mercy, as so many pictures have it. At the foot of the Cross we see the Mother of God wrapt in deep, tragic silence seeing the fulfillment of what had been begun when she brought her child to the Temple. She stood silent, at one with the divine and human will of her son: she was fulfilling the offering which she had begun thirty-three or so years before. At one with the will of God, at one with the will of her divine son, renouncing her own will, her own hopes, in an act of offering. This is something that very few of us will ever have to face in life, or at least I hope so; but it happens all the time in various parts of the world, and it has happened throughout history when one person has allowed another to give his or her life for a cause, for God or for men. Without a word of protest, sharing in the heroic offering. I would like to leave these images with you, however incomplete and imperfect they are. Look at them and ask yourselves. Where do I stand? What would I do, placed in the same circumstances? The Mother of God was the response of all creation to God’s love, but God’s love is sacrificial love. At the heart of the love of God there is the gift of self, the Cross. May God grant us to learn from this frail maiden her heroic simplicity and her wonderful wholeness. And let us learn from all the steps of her life, all the self-denial and the gift of self, all the beauty of her surpassing humility and its perfect obedience to the law of eternal life. Amen.