We have become accustomed to thinking about ourselves and our dignity in terms of people after the fall, basing this on separation, self-alienation, individualization, self-reliance, fragmentation and narcissism. But the divine love revealed in the Only-Begotten Son and in His wholeness, finds its fulfilment and perfection in the Other, it increases infinitely through Him, since He’s consubstantial, or rather, one and the same as regards the Love of the Father, because He was begotten from it and emerged into the world through it. 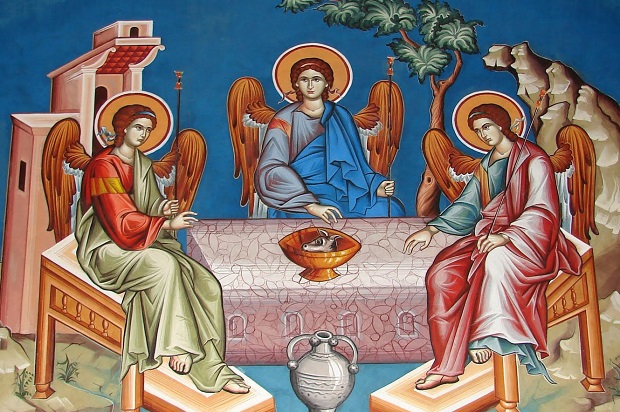 5. In this fatherhood and childship there lies the joyous and eternal mystery of our human existence. Given that this relationship is an integral part of the mystery of the Divine Existence, it’s natural that we should seek this, and find in our own lives the normal rhythm which has been given to us from the Father, through the Son, in the Holy Spirit. Fatherhood and Childship, as personal attributes of the Father and the Son, as regards the modus vivendi of God, are revealed in the incarnate Son as a way of living for us who have been created in the image and likeness of the Holy Trinity. And this is entirely natural, because the Holy Trinity, our life-making and life-giving God, isn’t some sort of abstract idea, constructed on a philosophical or any other basis. Everything which exists on the earth has its source in Him, springs from Him and reveals its secrets in Him. This, of course, is also true for the mystery of human paternity and childship and all human relationships.

This is expressed most clearly by Saint Paul in the following words: ‘For this reason I bend my knee to the Father of our Lord Jesus Christ, from Whom every family in heaven and on earth derives its name’ [the word used here for ‘family’ means roughly ‘all those descended from the father’] (Eph. 3, 14-15). Earthly fatherhood is therefore an image of that in heaven, from it derives its name and, through mystical participation in it, its true manifestation and realization. How? The only-begotten Son, begotten from the Father before all ages, to Whom the Father has entrusted all things (cf. Luke 10, 22) becomes ‘our common father’ (Gregory Palamas) in relation to us, according to the same ineffable law of love, because He begets us through the Holy Spirit and water. With our charismatic communion in the mystery of His childship, we’re adopted by God the Father. Having ‘put on’ God [Christ, in baptism] we become His siblings and children of the Father by Grace. This is why the Son doesn’t address the Father simply as ‘My Father’, expressing the uniqueness of His childship as His eternal, personal capacity, but addresses Him- and teaches us to do so- as ‘Our Father’. In this way, through His childship, He adopts us so that we can become one and ‘the same’, as the Father, the Son and the Holy Spirit are one (cf. Jn.17,11, 21-22).

6. There’s unity between the Father and the Son and we are called to make this unity our own, that is, to become one in them, through the power of the Holy Spirit, as They are one. This unity is manifested and granted by the wonderful mystery of the Church as a divine/human organization and as the dwelling-place of the Holy Trinity. This unity has been given to the Church but is also demanded of it. It’s been given since the Church is imbued with the revealed divine love and the Triune unity. It’s demanded of it since the Church is the mystical ‘laboratory’ of salvation, in which, through the mystery of fatherhood and adoption (cf. Gal. 4, 5), people are born and reborn spiritually, established in God. And all this is nothing other than deliverance from and cure of the parricidal urge which has poisoned our consciousness and subconscious and our historical life in general ever since Adam and Eve scorned God’s fatherhood and their adoption as the normal way of living, thus clouding their childship in relation to God.