Who is the newly-proclaimed Saint Meletios?

On 27 November, 2013, the Ecumenical Patriarchate entered two new names into the Calendar of Saints of the Church: Porfyrios Kavsokalyvitis and Hieromonk Meletios, from Ypseni, Rhodes. Many Orthodox will already know about Saint Porfyrios, who lived recently (1906-1991). But who was Saint Meletios?

He was born in the village of Lardos, on Rhodes, towards the end of the 18th century. His baptismal name was Emmanouil, and from childhood he received ‘the discipline and instruction of the Lord’ from his parents (as was also the case with Saint Porfyrios). He was taught to read and write by the parish priest of his home village. From an early age, he also demonstrated an intensely charitable and philanthropic spirit, despite his parents’ admonitions. 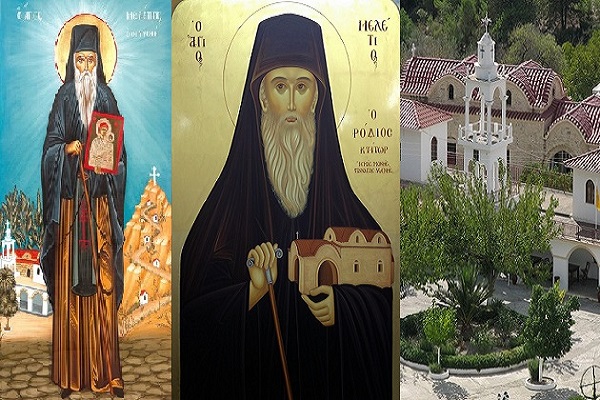 Another feature of his childhood was that he liked to go off alone to pray in a completely calm atmosphere. In fact, he used to find refuge for his prayer in a cave close to the ancient but abandoned monastery of Ypsos, which had been dedicated to Our Lady. According to tradition, one evening, at the time of prayer, he saw a light shining on a particular spot where there was an icon of the Mother of God which no-one had known was there.

He quickly acquired a considerable reputation for his very ascetic life. So the local bishop ordained him a deacon and, thereafter, a priest, spiritual guide and abbot of the monastery he’d reconstituted. Meletios was an important spiritual figure on the island, since he strengthened the Orthodox outlook of its inhabitants. He confessed people at the monastery and also in the villages he visited to instruct the faithful. He also performed cures, and protected fugitives (particularly from the Ottoman rulers). He was also distinguished for his charity and hospitality.

His activities began to upset the Turkish occupiers and their displeasure intensified when they learned that he recommended that Greek girls should have nothing to do with them. Indeed, some of the Turks attempted to assassinate him, but he learned of the plot and hid in a cave they didn’t know about. Local traditions relate a host of miraculous events through which divine Grace protected him from the dangers that were threatening him.

Towards the end of his life on earth, he fell victim to the most vicious slander. A girl with mental health problems became pregnant by a Turk, but reported that Meletios, who was elderly and much weakened by his ascetic life, was the father. In fact, the pure priest breathed his last before the Metropolitan of Rhodes as he was defending his innocence. The truth was soon revealed and he was buried with honours. When his grave was opened, an intense fragrance filled the surrounding area, demonstrating divine pleasure at the course of his life.

His precious relics have been sources of healing and miracles to this day. His blessed memory is honoured on February 12.