‘And God saw that it was good. Then God said, “Let the earth put forth vegetation: plants yielding seed, and fruit trees of every kind on earth that bear fruit with the seed in it”’ (Gen. 1, 11), because once the earth had been cleared of the huge volume of the waters, it appeared to be entirely deserted and unadorned. But once it accepted the law and the word of the Creator it suffered pangs and gave birth immediately to a whole host of offspring: verdure, plants, meadows, flowers and wonderful fruits. It was decked out like a bride, ornamented in a beautifully bejeweled costume. Even though it was such a short time since it had been cleared. No sooner was the word of God cast into the bowels of the earth, like a fertile seed, than the pangs of the vegetation began and the birth took place. 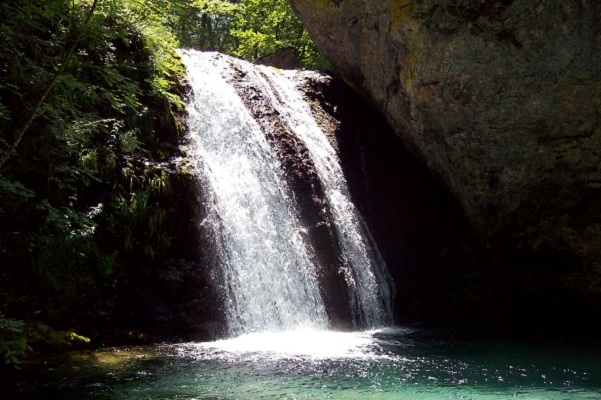 ‘And God saw that it was good’; there was nothing bad. ‘And there was evening and there was morning, the third day’ (Gen. 1-13). On the third day, the Triune God performed three tasks: He gathered the waters together; He caused vegetation to burgeon; and He made every tree appear. Because this was the immediate concern of the Creator, this is why the earth is always adorned. This is why neither grass nor trees have ever disappeared from the earth, even though they’re destroyed over time, because their fertile mother, the earth, easily gives birth to more…

Moreover, with the passage of time, the oceans haven’t increased to the point where they cover the face of the earth. It’s as if they’re locked in and there’s no key to let them out. They can’t get to that level and they can’t get past it.

We’re saying this for two very good and beneficial reasons. The first is that we learn from God’s creation to recognize the wisdom and inexpressible power of the Creator and to cry aloud with David: ‘How wonderful are your works, Lord; you have made everything in wisdom’ (Ps. 103, 24). And secondly, we learn that we should be ashamed to discover that mindless and unfeeling nature continues to observe the commandment of God (‘He founded the earth and it remains true to His ordinance’, Ps. 118, 90-91), whereas we, who are the rational creation, sin because we don’t observe God’s command, nor do we even fear Him as Lord. So, He can say in all justice: ‘I begot children and elevated them, but they have set me aside’ (Is. 1, 2). Let us therefore depart from evil and proceed towards virtue, so that when the Creator comes as Judge, to judge us, we won’t appear before Him as being disfigured by sin, but, instead, as being glorified with virtues and acting together with the saints ‘in Jesus Christ our Lord’ (Rom. 6, 11).

I should now like to add in to my discourse, as a sweetener, the reason why I came to write this book, because the narrative has something of interest and benefit for those who are attentive, because of which, God willing, it seemed good to me that I should reveal what has escaped notice.

It happened like this. I was visited by a divine ‘dayspring from on high’ (Luke 1, 78), the result of which was that I withdrew from the vanity of life and directed my humble feet towards the ‘straight paths’ (Ps. 26, 11) and the ‘way of peace’ (Is. 59, 8) that is the monastic life. I secretly left behind my parents and seven siblings, male and female, and arrived at a certain holy monastery, where I happened to hear the words: ‘In the beginning, God made heaven and earth’ (Gen. 1,1). After I heard the rest of the reading, I was greatly impressed, because I’d never in my life heard such words before. I was so unlearned that I didn’t know even the basic things, though I was already a young man of about eighteen at that time.

*Literally ‘sons’, but the choice of ‘children’ is justified because a little further down Saint Neofytos talks about his female ‘brothers’, i.e. siblings.