Children’s perception as a basic success factor in teaching

It is useful that the children learn the value of the Saints and the things they offered to society and to the people through their miracles. This is the reason why this subject was chosen to be taught to pre- schoolers. In the end, the teaching results were both positive and negative.

First of all, the cognitive level of the particular school class was good enough for the teaching to “flow smoothly”. The subject chosen began being taught and was completed with consistency, and the curriculum designed to be taught was well adapted to the children’s level. I personally believe that the terms used were fairly incomprehensible for pre- schoolers, however they surprised me by thinking about them and finally managing to understand them. Specifically, when children were asked “Does any child know why this man was called Nicholas?”, children were unable to answer. However, when I said to them that the name “Nikolaos” is separated in two words, then the children tried with my help to find these two words. After we led to the conclusion that the name is constituted by the word “victory” and the word “population”, then I asked them “What means the word victory? ” and they gave the following answers:

Elpida: When somebody wins.

Maria: It’s when we play and we win.

Thanasis: Before i gained Nikos to the game. 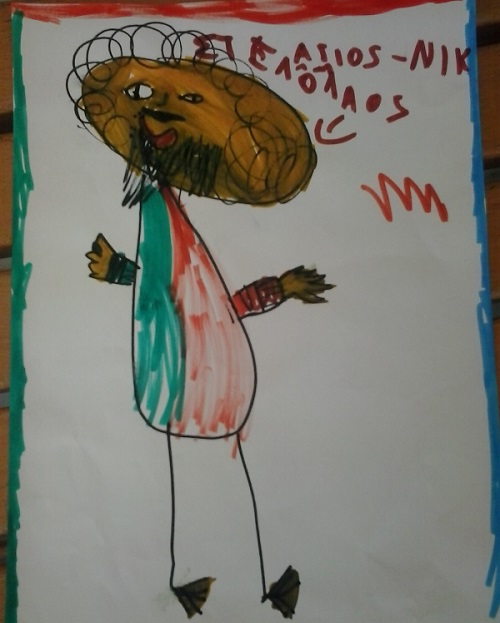 A student’s drawing of St. Nicholas

From the above it is easy to understand that children already understand the meaning of this word and it was easier to edit it further, however they could not give a explicit and evident definition. Afterwards, I asked the children “What means the word population? ”. Most children in this question gave the same answer, which was that the word means “a lot of people”. The children in this question seemed to have understood that this word represents a large crowd of people. A difficult word which the children did not know was “ vision”. However, after editing the previous word a child asked the question: “What is the vision? ‘. When I asked the other children what the word means no one raised his hand to answer and finally I gave them the answer that they waited for. Concretely, the reactions of children were the followings:

Me: Vision is a picture that sees a person in his imagination.

I: This picture is not genuine, is false. The Saints presented magically to people in order to help them.

Stella: That was a lie.

Korina: The persons did not see them in truth.

Therefore, it’s easy to understand that children partly understand this concept, as it was quite difficult first to retain the word and second to remember its meaning. However, to the next word we chose to analyze, which was the “boat”, children took courage again and showed their enthusiasm about the fact that they knew the meaning of the word. Indicative answers of children are:

Me: Do you know you tell me what is the boat?

Maria: Yes many traveling with them.

Proportional were also the answers that gave and the remainder children. Finally, another easy and simple word for children was the “heavy sea”. Specifically, I refer to the children:

Me: In the story we read we heard another strange little word.

Me: That’s right. You know what is the heavy sea?

Stella: This word has in her the word “wave”.

Areti: The storm is when the sea has many waves.

Nick: They are dangerous.

Thanasis: And then the ships cannot travel, because if they travel can be soaked.

Stella: Yes, and we wanted to go on holiday but we didn’t because there was heavy sea and my dad said that we could not swim.

From all the above we can lead to the conclusion that while the children at first was reluctant, they finally were able to understand and elicit meanings and definitions of words that have worked. The children’s responses were very specific and helped in better understanding of the course.