Teaching the life of Saint Nicholas in pre-school: evaluation and conclusions

The children comprehended the concept of celebration, as well as the concept of sanctity. More specifically, when I asked “Do you know what does ‘Saint’ mean?” a child replied “Yes, the Saints are dead and they have become spirits”. In addition the lesson was more sedentary that active. So, I noticed that almost half of the pupils got bored during the second teaching period and they stopped participating actively. Nonetheless it is a noticeable fact that one boy, who rarely sits down quietly watching the lesson, was unusually quiet and never caused any problem, without watching or actively participating in the lesson of course. He did listen to the story, however he didn’t answer any of the comprehension question that followed.

Furthermore, the goal and the content of the lesson were set from the beginning, and this resulted in successfully teaching anything that had been organized. The children showed interest to what they were listening, since they had clearly never discussed anything similar in the kindergarten before. The vocabulary used was adapted to the children’s needs and abilities, so that they do not find any difficulty. This resulted in the better conduction of the lesson, so that the children can understand the concepts more easily. 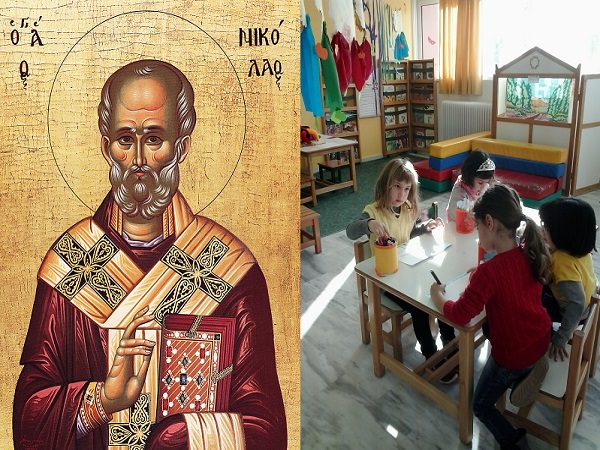 Meanwhile, a histogram was used on which we both noted anything important being said and we stuck pictures, so that pupils not capable of reading be able to see and understand the content of the discussion. At this point, it should be mentioned that the children relied a lot on these pictures, since they were looking at them, examining them and describing them.

The right organization and preparation of the teaching resulted in the active participation of most pupils during the first teaching period, apart from the particular child that has already been mentioned, who couldn’t actively participate during the entire procedure. Furthermore, the children were interacting with each other, discussed on possible solutions to some of the questions that had been posed, and they answered quite easily to every question. More specifically, the moment they started working on the worktables to draw, the children were very concentrated on what they were doing and there was peace in the room.

Finally feelings of self- fulfillment were obvious since the goals that had been set were successfully reached and the children were involved in a teaching process through which they learned new information and they had the chance to wonder on it. Through this teaching the children had the chance to learn, to wonder and to be informed on folk traditions and miracles.

All Saints, as people, they are special, and for this reason they have to be honored. This is because they managed to help people who were really in need by their actions and by their miraculous interventions. They fought, they resisted and they faced a lot of difficulties, yet they never betrayed their faith to Christianity and to God.

Through the teaching that was implemented on the subject of Saint Nikolaos, we aimed in teaching the children who the Saints are and why we have to revere them. The children were informed about the life of Saint Nikolaos, with a focus on his offering to the people and his charisma to work miracles. We also stressed that the saints never ceased to show their faith to Christianity, and this resulted in their sanctity. Finally, we considered it was important for the children to be taught the merits of the saints, so they can appreciate them and want to follow them in their lives.

In conclusion, the teaching on saint’s lives, and more precisely on Saint Nikolaos’ life was both important and necessary, as it cultivated religious, educational and moral merits to the children.