On the first Sunday of Great Lent, our Church celebrates the triumph of Orthodoxy, of the true faith, which has overcome all heresies and has been established once and for all. This is why it’s called the Sunday of Orthodoxy. 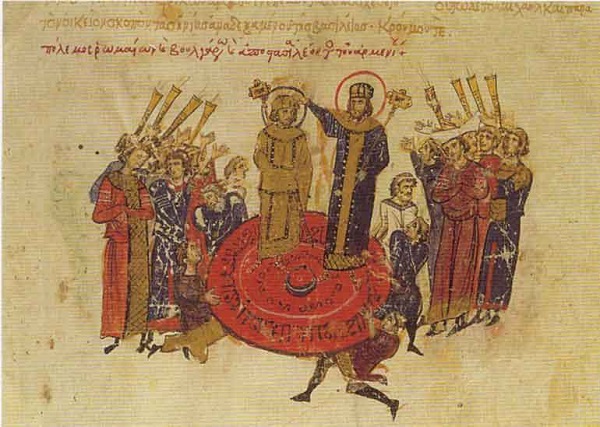 The word ‘Orthodoxy’ doesn’t refer to any particular system, or any folk tradition or art. Orthodoxy is ‘right thinking’*, the right faith in God. It’s the Church, the One, Holy Catholic and Apostolic Church. It’s the body of Our Lord. The definition of the Church was given to us by its Founder Himself, the Lord, through the voice of Saint Paul, who, in his letter to the Ephesians reveals that: ‘… And he has made him the head over all things for the church, which is his body, the fullness of him who fills all in all’ (22-23). It should be stressed that there is no Orthodoxy outside the Church.

This is why the Fathers of the Church emphasize the fact that faith, tradition, worship and healing are all interwoven. They’re so unified that it’s impossible for people to live in an Orthodox manner if they come adrift from even one of them. It’s only within this context that we can talk about Orthodoxy.

It’s worth noting some historical features of this heresy. The term Iconoclast heresy refers to the conflict which broke out in the Byzantine Empire in the 8th century, over the reverence paid to Christian icons. This conflict can be divided into two phases and lasted from 726 to 842. It divided the citizens of the empire into iconoclasts and iconodules. In 726, Emperor Leo III issued a proclamation through which the reverencing of icons was condemned as idol-worship. This edict was kept in place by succeeding emperors. Indeed, Leo’s son and successor, Konstantinos V, launched a persecution against the icons and the monks, who supported them. In 754, the Synod of Iereia was called, at which religious depictions were condemned. The problems and difficulties increased enormously. Monks and nuns were forced to marry and a good number of monasteries were taken over by the state. Saint Theodore the Studite wrote that ‘almost all the monks and abbots in Byzantium’ ceased to be supporters of the iconodule persuasion.

In 787, at the request of Patriarch Tarasios of Constantinople (honoured on 25 February), Emperor Konstantinos VI and his mother Iirene the Athenian convened the 7th Ecumenical Synod in Bithynia. The Synod decided in favour of the restoration of the holy icons and condemned both the iconoclast heresy and the idea of the depiction of the invisible and immaterial Trinity.

The dispute finally came to an end when Emperor Theofilos passed away in 842 and was succeeded by his infant son, Michael III. Because the boy was under age, his mother, Empress Theodora (11 February) took over the reins of power. Theodora appointed three commissioners to ensure that, by God’s grace, this heresy would cease to exist. Their first act was to remove and defrock the iconoclast Patriarch Ioannis Grammatikos, who was the main champion of the iconoclasts in their struggle against the iconodules.

* It comes from two Greek words meaning ‘correct’ and ‘to think’. The term was translated into Slavonic as ‘pravoslovie’, meaning, roughly, ‘the right words’, but this was then miscopied as ‘pravoslavie’, meaning ‘right glory’. In fact, however, the Greek word for ‘glory’ (doxa) is derived from the same root (dokeô) as ‘thinking’, and, in Ancient Greek, one of its meanings was also ‘opinion’ or ‘doctrine’, so all’s well that ends well. WJL.