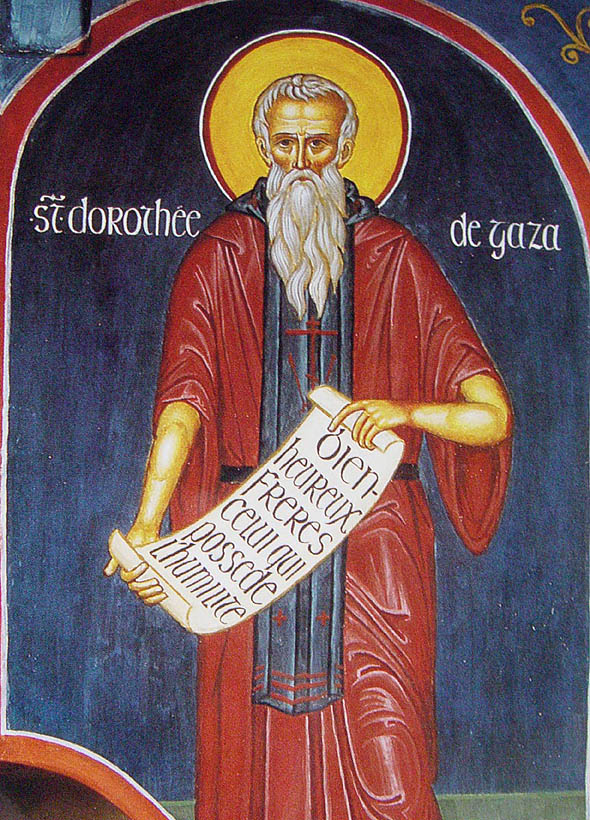 In Abbas Dorotheos, Ascetic Works, Teaching XVI is An Interpretation of certain sayings of Saint Gregory sung in hymns at Easter. These hymns are no longer sung at Easter, since they have been superseded by the famous canon by Saint John the Damascene, though he may have used them for inspiration. Abbas Dorotheos seems to be basing his remarks on a tropario which was, indeed, sung at Easter when he was alive and elements of which are to be found in a homily preached by Saint Gregory on Easter day, 383 A.D. (S.C. vol. 92, p. 458). The tropario was published by S. Petrides in Byzantinische Zeitschrift 1904, 421-3). (WJL).

166. I’m very happy to say a few words to you about the hymns we sing, so that you won’t be too taken up with the melody and so that your minds will take part commensurately in the power and depth of the words. So what have we just been singing?

It is the day of the Resurrection, Let us offer ourselves as first-fruits.

In olden times, when the Israelites came together for their festivals, according to the Law they offered God gifts such as incense, burnt offerings, first-fruits, and the like. Saint Gregory invites us, also, to celebrate the feast in God’s honour as they did, and exhorts us to do so by saying:

‘It is the day of the Resurrection’,

a day instead of the holy feast, a day of divine celebration, the day of Christ’s “Passover”. What is the “Passover” of Christ?  The Israelites kept Pesach when they came out of Egypt. Easter, the “Passover” which the Saint commend us to celebrate, is enacted by the soul, which comes out of the spiritual Egypt, that is, from sin. When the soul passes over from sin to virtue, then it celebrates the Pesach of the Lord. As Evagrios says: ‘The Passover of the Lord is the passage away from evil’.

167. So today, Easter Day, is the ‘Passover’ of Christ, a day of bright feasting, the day of the Resurrection, the day when He nailed sin to the Cross, died for us and then rose. Let us offer ourselves as sacrificial gifts and whole burnt offerings to the Lord, rather than dumb animals which Christ doesn’t want. Because ‘You did not desire the sacrifice and offering of dumb beasts, and are not pleased with burnt offerings of sheep and calves.’ And Isaiah says: ‘What do I care for the multitude of your sacrifices says the Lord’ and so on. But the Lamb of God was sacrificed for us, according to the Apostle who says, ‘Our Passover is Christ Who was sacrificed for us, to take away the sin of the world’. And, as the Scriptures say, He has become a curse for our sake: ‘Cursed be the man who hangs upon a tree’ in order to ‘redeem us from the curse of the Law’ and that we might be adopted by Him. This is why we ought, on our part, to offer Him a gift that will please Him. So what gift or what sacrifice ought we to offer Christ in order to please Him on the day of His Resurrection, given His aversion to the sacrifice of dumb animals?

In his teaching, the Saint tells us the answer, because, after saying, ‘It is the Day of the Resurrection’, he adds, ‘Let us offer ourselves as first-fruits’. The Apostle, too, instructs us; Offer up your own bodies as a living sacrifice, holy and well-pleasing to God, your spiritual worship.’

168. How then should we present our bodies as a living sacrifice, holy to God? By no longer following the desires of our flesh and our own ideas, but by walking in the spirit and not fulfilling the desires of the flesh. This is mortification of our earthly members. This is what is meant by a living sacrifice, holy and well-pleasing to God. But why a living sacrifice? Because a dumb animal led to sacrifice, dies at the very moment that it becomes a sacrificial victim. But the saints who offer themselves to God, offer themselves alive, every day- as David says, ‘For your sake we are put to death all the day long, we have been reckoned as sheep for the slaughter’. This is what St. Gregory means by

‘Let us offer ourselves as first-fruits’,

that is, let’s sacrifice ourselves, let’s die to ourselves all the day long, as did all the saints, for the sake of Christ our God. How did they put themselves to death? By not loving the world or what is in the world- as it says in the Catholic Epistles, by rejecting the lust of the flesh, the lust of the eyes and the pride of life, that is, hedonism, avarice, and vainglory, and by taking up the Cross and following Christ and crucifying the world to themselves and themselves to the world. About this the Apostle says, ‘Those who belong to Christ have crucified the flesh with its passions and desires.’ This is how the saints put themselves to death.