Jesus again sets the Law of the Old Testament in its true interpretational framework and at the same time urges us to emerge from the shadow of the Law into the Light of the Grace of God, which is love. By transcending the law of retaliation, Christianity promotes the principle of love towards one’s neighbour, of pardon, of returning good for evil, of forgiveness. As Saint Mark the Ascetic says: ‘those who believe in Christ, Who speaks of responding, suffer all injustice willingly, depending on their faith’. And let’s not forget what Alexander Pope wrote in the 18th century: ‘To err is human, to forgive divine’. 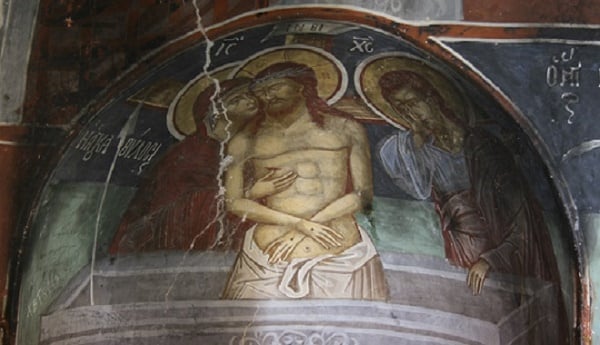 Jesus’ teaching on forgiveness and love isn’t merely some moral theory, but is realized and experienced in the lives of our saints. This supra-natural condition was experienced by the saints of the Church who took to heart Christ’s words about forgiveness and love. A typical example is that of Saint Dionysios of Zakynthos, who forgave murderer of his brother.

This murderer was a paid assassin who killed Saint Dionysios’ brother because of some hostilities between their families. After committing the crime, the murderer fled to the hills in order to escape the wrath of the relatives, while an army detachment was also hard on his heels. Unaware of the relationship between Saint Dionysios and the victim, the murderer asked the saint to hide him. The saint calmly asked the man why he was being hounded and from his answers realized that the person before him was the man who had killed his brother. Although deeply shaken by the death of his brother, he recalled the words of the Lord on the Cross concerning those who were crucifying Him. He stretched out his hand to the murderer and blessed him, thus forgiving him. Not long afterwards the army detachment reached the monastery. The saint told them he hadn’t seen the murderer in those parts. Once the detachment had left, the saint took the murderer to the back door of the monastery and helped him escape in a boat. Saint Dionysios didn’t fall into the temptation of seeking revenge, nor did he ask for justice to be served in some courtroom, but instead he experienced this effulgent, God-like state of granting forgiveness, experiencing the emotions of Jesus Christ, Who, hanging on the Cross, forgave those who were crucifying Him: ‘Father, forgive them, for they do not know what they are doing’ (Luke 23, 34).