The end of the fast and the ‘air’ of asceticism

Having completed the forty days that bring profit to our soul, we beseech You, in Your love for us: May we behold the Holy Week of Your Passion that in it we may glorify Your majestic works and ineffable dispensation for us, singing with one mind, ‘Lord glory to You’.

Great Lent has come to an end. It’s an event which cannot but move all consciously-striving Christians, whatever the level of their spiritual life. Even those who’ve found the fast difficult and can hardly wait for it to be over, or those who’ve grown weary of the frequent services, have, at least to some extent, experienced the ascetic atmosphere of the Church. In any case, the liturgical and festal order of the weeks of Lent in itself creates a growing sense of expectation. We engage in an ascetic struggle in order to reach a goal, an end-point. As described for us in the tropario above and which marks the transition from Great Lent to Passion Week, the goal is the Resurrection. 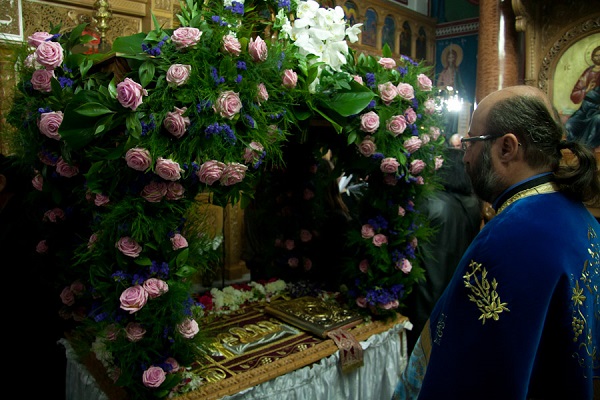 With everything involved in it- fasting, voluntary hardships, frequent attendance at services, more intense prayer, the war against the passions and many other aspects which are described in the texts of the Fathers of the Church- there’s no doubt that asceticism occupies a place of central importance in the Christian life. Elder Sophrony Sakharov is absolutely clear about this when he says that, above all, Christians have to be ascetics.

But, according to the niptic teaching of the Church, there’s a trap involved here: that we, as Christians might believe that it’s asceticism that brings us to the Resurrection and gives us salvation.

In the end, what is Christian asceticism and what isn’t it?

Elder Aimilianos Simonopetritis describes asceticism for us in detail through an image of the way in which human breathing functions: ‘Asceticism is a means, a breath in the spiritual life… In a sense it’s the heart and lungs or, rather, the breath and cardiac function of the soul… But [your] invigoration isn’t due to this breathing or cardiac function, but to the air, a factor which is actually foreign to you. Your heart belongs to you, as do your lungs, but what use are they to you if there isn’t any air? You need something essentially different… [and this is] the Grace of God, the body and blood of Christ, the Holy Spirit, which is foreign to our own substance’[1].

Saint John of the Ladder states that people have often managed to pursue asceticism to the point where they’re without passions. But when they’ve changed their environment, they’ve fallen into terrible, atrocious sins. Because in the first instance their asceticism was built on vanity and praise, or, even worse, it created for them the sense of moral self-sufficiency as regards God and other people[2]. For the Fathers, asceticism is a means, not an aim in itself. If we start from the wrong place, and treat it as a personal achievement, then it’s destructive and ‘anti-God’[3]. According to Elder Iosif Vatopaidinos there’s a danger that Christians will be thrown off course in their spiritual life, imagining they’re being ascetics, while, in fact, labouring in vain[4].

In the end, asceticism is an appearance before God. God is always with us, even when we sin. But sin nullifies any intervention on the part of God, because of the limitless respect He has for our freedom[5]. Through asceticism, however, we’re able to express to God our desire to place our freedom at His disposal. Without adding any damaging psychological guilt, we tell God, directly and humbly that we’re sick and that we want to be resurrected with Him[6].

The Resurrection of human nature from its enslavement to the passions into true life isn’t a job for asceticism, but a task for Grace. This is how we see examples of great sinners who easily change their former lives and willingly attach themselves to the life of Christ and the Church[7].

This truth sets the bounds of Orthodox asceticism within its true dimensions and creates a festal and joyful atmosphere, even in the period of Great Lent. In this way, the Church brings those of its members who have ‘completed the forty days that bring benefit to our soul’ to praise Christ our Saviour with one mind and one voice. He alone complements those things which our imperfect human asceticism lacks and gives us the Grace of the Cross and the Resurrection.