This is an iconographical type [usually known by its Greek title “Anapeson”], which represents Christ as a young child, recumbent on a cradle or cot, and symbolizes the fulfillment of the Messianic prophecy in verses 9-12 of chapter 49 of the book of Genesis. In these, the patriarch Jacob pronounces the prophecy which has to do with the tribe of Judah, from which will come the Messiah, and in this way foretells His advent, passion and resurrection. 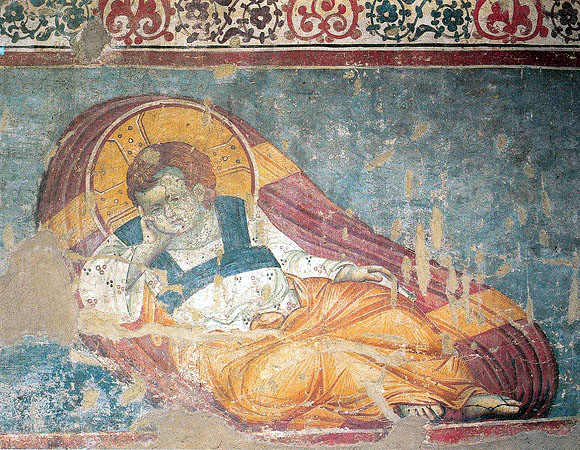 According to this narrative, as Jacob was nearing the end of his life, in Egypt, where he had gone to find his lost son, Joseph, (Gen. 46, 28-34), he sensed that death was at hand and so he called his sons to reveal to them the future course each one would take, as well as the way in which each of the twelve tribes descended from them would evolve.

Initially, having dealt cursorily with Reuben, the first-born, and the next two, Symeon and Levi, it was the turn of his fourth son, Judah, to receive his father’s blessing. Judah, however, did not receive an ordinary blessing, but a rich one, which foretold the future of his tribe, thus granting him an outstanding position with regard to the others, given that from his tribe would come the Anointed Messiah, as the Evangelist Matthew informs us in the prologue to his Gospel (Matth. 1, 1-17).

According to Saint John Chrysostom, the verses of the Bible narrative which contain Jacob’s blessing: “…recumbent, you have slept as a lion and as a whelp; who shall rouse him? A ruler shall not fail from Judah nor a prince from his loins until there come the things stored up for him; and he is the expectation of nations. Binding his foal to the vine and the foal of his ass to the branch; he shall wash his robe in wine and his garment in the blood of the grape. His eyes shall be more cheering than wine and his teeth whiter than milk”, foretell everything that was to happen to Jesus Christ (P.G. 54, 574). 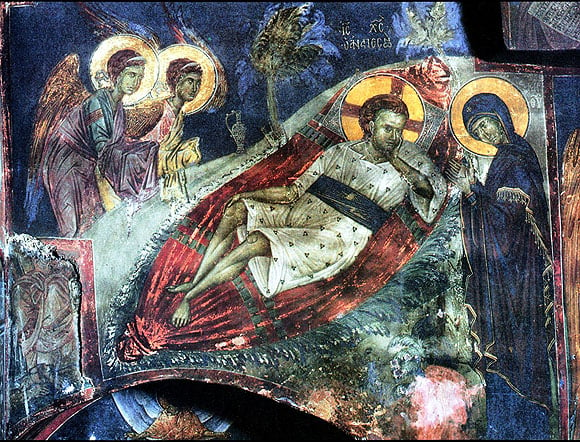 In his choice of “recumbent” and “sleeping”, the patriarch Jacob deliberately employs the image of a lion, because who would dare waken one which is sleeping. In this case, the sleeping lion is not Judah, but his descendant, Christ Himself, Whose body, after His sacrifice on the cross, was carefully placed in the tomb, where it remained for three days. During this time, His body remained unaffected by sepsis or decay, which is the common fate of  human bodies, because they dared not touch Him.

This incorruption is naturally due to the fact that Christ’s body was united to His divinity as the Son and Word of God: “for Your flesh saw no decay, Lord” (troparion of the 5th ode of Mattins on Holy and Great Saturday). Death could not defeat Christ, because Jesus, as Lord of All and God the Creator, was more powerful than death (“by death you have trampled down death”). The devil and Hell thought that the death of Christ was the that of an ordinary mortal, but they did not reckon with the fact that the wound they gave Him was not merely deadly, but actually contributed to the awakening of His body at the resurrection. So, in the hymnology of the Orthodox Church, Hell is personified, and complains by saying: “My power has been destroyed…Would that I had not accepted Him Who was born of Mary…I accepted a mortal as one of the dead…He came to me and has destroyed my power… As God, He has raised the souls I once held, but I am completely unable to hold Him (Stikhira, Vespers, Holy and Great Saturday).

Continuing the prophecy, Jacob proclaims: “Who shall rouse him?” (the lion). In other words, who would be foolish enough to waken a sleeping lion? And Theodoritos Kyrou comments that even asleep, lions are terrible and dangerous, so, in the same way, the death of  Christ the Lord is terrible and dangerous for the Devil and death itself. (P.G. 80, 216-7).

Even though the patriarch Jacob’s question as to who shall rouse him seems to go unanswered, the person who wrote the hymns for Mattins on Great Saturday asks the same question: “Who shall rouse the king?” and provides the answer: “Arise through your own power” (stikhiro at Lauds), in agreement with Saint John Chrysostom, who notes that Jesus has the power to surrender his soul, but also to regain it: that is, He has no need of outside intervention (as was the case in the resurrection of Lazarus), but will arise by Himself, because He so wills it, demonstrating His power as Almighty God (P.G. 54, 574).

The depiction of the “recumbent lion” also occurs in the book of Numbers, “He lay down and rested as a lion and as a young lion” (Num.2, 9), as part of what the seer Balaam has to say when he proclaimed the Christological prophecies for the people of Israel. Even though the seer is presented as not having the required purity of soul, God nevertheless allowed prophetic words to emerge from his mouth.

In contrast to the image of the “recumbent lion” which is presented in Genesis 49, 9,  where the death and resurrection of Christ the saviour are foretold, that at Numbers 24, 9 refers to the future relationships between Israel and the other peoples in the region. Israel is depicted as a lion prowling through the jungle, without being under threat from enemies. In the same way, the Israelites would not fear anyone, but would always triumph over their adversaries.

And so Christ the Saviour “slept as a recumbent lion”, without death, decay or sepsis daring to touch His body, nor Hell to accept it and install it in its kingdom: “nor was your soul left in hell as that of a stranger” (tropario, ode five of the canon at Mattins on Great Saturday). For the soul of Christ, which descended into the depths of Hell (troparion, ode eight of the same canon) was united to the Divinity of the Son and Word of God and “He rose from the grave on the third day, as He foretold: I shall destroy the temple and on the third day I shall build it”.