The death of Jesus was no mere appearance; he really died. His soul and body were truly rent asunder.

It is proper to say, moreover, that Jesus’ body and his soul went in different directions. Indeed, the Church marvels in this mystery. In a Troparion appointed during Bright Week we address the Savior:

“In the tomb with the body, in Hades with the soul, in Paradise with the thief, and on the throne with the Father and the Spirit, wast Thou, O boundless Christ filling all things.”

The soul of Jesus departs, leaving his body—in Mark’s language—a “cadaver,” ptoma. Although Jesus’ soul is no longer present in his body, this body is not abandoned; it is not just another dead body. The Person attached to this body is God’s eternal Word and Son, and the severing of body and soul does not touch the integrity of the Hypostatic Union; it is God’s Son who lies there in the tomb. He does not let go of his body. 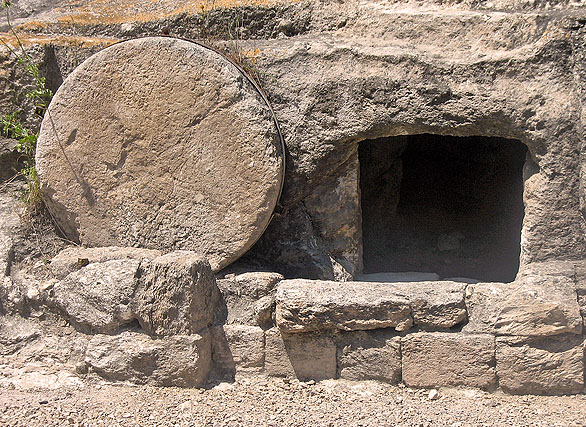 The eternal Word is preserved in both soul and body. For this reason the immolated Christ prays to his Father in the words of the Psalmist:

“Therefore my heart rejoiced, and my tongue was glad;
for yet will my flesh, as well, abide in hope.
For You will not abandon my soul (psyche) in Hades,
Nor will You give Your Holy One to see corruption.”

Because of its Hypostatic Union with the Person of the Word, this body in the tomb of Joseph of Arimathea does not undergo the slightest trace of corruption.

When Jesus spoke of his descent into the grave, he likened it to Jonah’s three-day burial in the belly of the sea monster. Jonah, we recall, sacrificed his life—in the sense of putting it in certain peril—for the sake of the Gentile crew of the boat that carried him. He instructed his shipmates,

“Pick me up and throw me into the sea; the sea will then become calm for you. For I know that this great tempest comes because of me” (Jonah 1:12).

Jesus, foreshadowed by the experience of Jonah, hands himself over to death for the sake of us, his shipmates. And prophesying this deed, he declares,

Jesus made this declaration as a response to the challenge of his enemies that he should give them a clear sign demonstrating his identity:

The sign Jesus gives them, therefore, will be the Resurrection itself.

Jesus asserts this, moreover, in the context his enemies’ resolve to murder him. Just a few verses earlier Matthew told us,

“Then the Pharisees went out and conspired against him, how they might destroy him” 12:14).

Jesus’ answer to this threat?

“Do your worst; I will lie in the tomb no longer than Jonah was in the belly of the beast.”

Since Jonah’s sojourn in the deep is a type of the burial of Christ, it is instructive to reflect on that experience. Indeed, the Church, by including Jonah’s prayer among the Odes of Matins, encourages such reflection. In that liturgical setting with other songs of deliverance—including the canticles of Moses (Exodus 15:1-19), Habakkuk (3:2-19), Isaiah (26:9-20), and Daniel’s friends in the fiery furnace (Daniel 3:26-88)—the full Christological meaning of Jonah’s experience is displayed. Jonah sings of the Paschal Mystery.

In Jonah 2, which contains this canticle, Jonah’s experience is portrayed as a dramatic metaphysical pilgrimage; he goes down to investigate the very roots of existence. Jonah descends into those “waters under the earth,” of which the opening verses of Genesis speak; he enters into the

“cast out from Your eyes (minneged ‘eneka).”

In this journey Jonah explores the depths where the mountains are moored. His soul (nephesh, psyche) is plunged into the peril of utter oblivion. And here, in the depths—nearly, he feels, outside the gaze of God—the prophet remembers the Temple, that sacred place where the Lord dwells in beauty and dispenses order.

The “greater than Jonah,” too, even as he slumbers in the tomb hewn out of stone, anticipates his entrance—very soon—into the true Temple.