Encomium to the Holy Martyr Pelagia – 3

If we’re to feel  pride in the magnitude of our love, let us leave here to go home in the same good order as befits those who have assembled to honour such a martyr. Because, unless we do, then not only have we not benefitted from the occasion, but we’ve actually crushed a great danger to our bosoms. I know that you are clear of such notions, but that’s not enough in your defence; we have to bring our erring bothers and sisters back to full order and a fitting life-style. Have you honoured the martyr with your presence? Honour her also by correcting your own members. 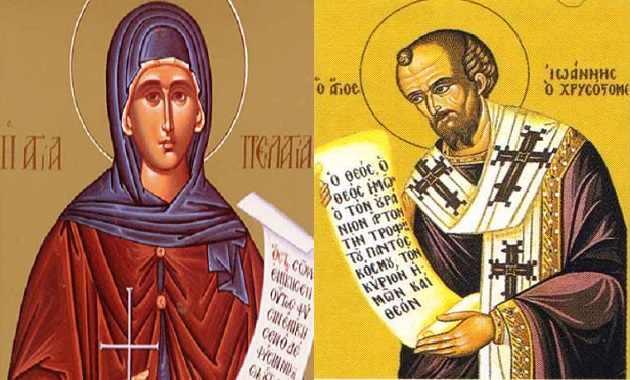 If you see laughter, a strutting gait, and improper appearance, go up to these people, fix those who are behaving like this with a serious and powerful glare. But do they mock you the more and hold you in greater contempt? Take two, three or more of the brothers with you, so that they respect the numbers. And if you can’t bring them to their senses even then, then show them to the priests. But it’s most unlikely that things will come to such a pass. If they’re thus chastised and checked, as they would be, then they’re likely to desist and be ashamed of their unruly and childish behaviour. And if you win over ten, or three, or two or even just one, you’ll have made great gains.

Is the road long? If it is, let’s use the time to contemplate what we’ve mentioned. Let’s fill the broad road with clouds of incense. Because, even if someone set up censers at specific points and changed the scent of the air itself with the fragrance therefrom, it wouldn’t be as sweet-smelling as it would be now, if all of us who are walking along it today spoke of the deeds of the martyr and, on our way home, transformed out tongues into censers. Don’t you see, when the emperor  arrives in a city, with what order the soldiers line the streets, armed and in serried ranks, passing commands in low voices and bearing themselves with caution, so that people watching them find them a worthy spectacle? So let’s imitate them, because we, too, are walking before a king, not a tangible one, not an earthly one, but before the Lord of the angels.

So let us also enter in good order and urging one another to walk properly and in an orderly manner, so that we’ll surprise the onlookers not only with our numbers but also our good behaviour. Of course, even if no-one else were here and we were walking along the road all by ourselves, we would still be obliged not to do anything out of turn since there’s always the unsleeping eye which is everywhere present and sees all things. But now there are lots of heretics among us, and if they see us dancing, laughing, shouting and getting drunk, they’ll go away, after condemning us in the worst terms. And if someone who scandalizes another person is subject to enforced punishment, what punishment shall we undergo for scandalizing so many? But, after what we’ve said and this exhortation, let no-one be responsible for such things as we’ve mentioned. Because if they were unacceptable before I said anything, how much more so are they after this advice and admonition, and so punishment is even more necessary, both for those who do such things and for those who see them being done and turn a blind eye.

In order to prevent them being punished, then and to gain a greater reward for yourselves, take upon you the guardianship of our brothers, help them concentrate on the narrative they’ve heard, so that, all along the way they can reflect upon it and, when they’ve taken the leftovers from the table to those who stayed at home and were not present here, make your shining spiritual presence felt there, too. Because in this way we’ll experience this feast all the more fully, we’ll embrace the holy martyr with greater goodwill, paying her all due honour. And you’ll give her far greater pleasure by leaving here with spiritual benefits, then you would if you’d made lots of noise.

Through the prayers of this saint, then and of others who achieved as much as she did, may you remember what has been said exactly and manifest it all in your works. May you live well-pleasing in all things to God, to Whom belong the glory and the power unto the ages of ages. Amen.

The second part of this encomium, where Saint John exhorts people to behave properly, sounds strange to modern ears, but in the second half of the 4th century must have very much to the point. Persecutions had ceased and the emperor, Theodosios (379-395), on 27 February 380, declared the Catholic Church to be the only legitimate imperial religion and ended state support for the traditional Hellenistic and Roman religions. But there were still plenty of pagans about, as well as heretics, as Saint John observes in his encomium. John is concerned with setting these people a good example, but his language also tells us about the pagan feasts. By saying: “Do not behave like them”, he is also telling us how they behaved. It appears that pagan feasts were more in the nature of a revel than a religious festival in the sense that we would recognize it today. Some of the features of the two events seem to have been similar- a common meal, a procession through the streets, incense- and no doubt many of the more recent converts would have been inclined to revert to old habits. Saint John was not being a wet blanket, but was trying to make the necessary distinction between a pagan carousal and a modestly-observed Christian feast-day.