Encomium to the Holy Martyr Pelagia – 2

Just think what a great thing it would have been for the judge to be sitting on his bench, the executioners at the ready, the torture chambers prepared, the crowd gathered, the soldiers waiting and all of them drunk with pleasure in the hope of seeing the prey. And then, the soldiers who’d gone to arrest her returning shamefacedly and relating the drama that had occurred. What shame and how much pain and mockery they naturally had inflicted on them by the unbelievers. How natural it was that they should leave with their heads bowed in shame, having learned through experience that their war was not against other people but against God. And of course, Joseph, when he was being pursued by his master’s wife, ran away naked, leaving behind his clothing which had been caught in the sordid hands of the barbarian woman. In the same way, Pelagia didn’t allow them grasp her body with their lecherous hands, but once she had ascended with her naked soul and left her holy flesh  to her enemies, they were at a loss to know what to do with her relics. 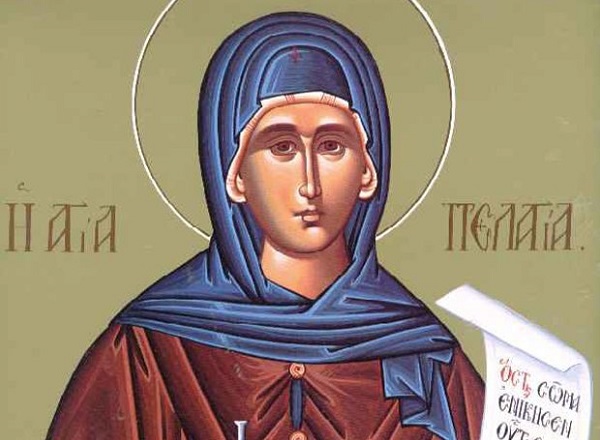 Such are the exploits of God: He brings His servants our of difficult situations with great ease, but those who oppose Him and fight Him He leads into confusion, even when everything seems straightforward. For what was worse than the quandary the young girl was in? What could be easier than this cut and dried situation? They had her alone, locked inside the house as if it were a prison and yet they left after having failed to catch their prey. Besides, whereas the maiden was bereft of allies and helpers and saw no escape anywhere from her trials and the mouths of the beasts who were beside her, she escaped their plots as if, one might say, she’d been wrenched from their maws, and defeated the soldiers, judges and authorities. And, of course, as long as she was alive they could all hope to defeat her, but once she was dead they were completely at a loss, learning as they did that the death of a martyr is a victory for the martyr. It was like a ship once that was laden with valuable pearls and was struck by a wave at the very entrance to the harbour. It was in danger of foundering, but the current swept it forwards and so it actually reached its moorings faster than expected.

This is what happened to blessed Pelagia. Because the soldier’s raid, the fear of the expected tortures and the threat of the judge all falling onto her with greater force than any wave, made her  fly up to heaven with greater speed. And the wave that threatened to sink the ship, in fact sent her to a serene harbour and so her body was transferred, brighter than any lightning, blinding the eyes of the devil. Because the lightning that strikes from the skies isn’t so terrible to us as was the body of the martyr to the phalanxes of the demons, appearing to them, as it did, to be more fearsome than any lightning could be.

None of this happened without God’s intervention. This is clear, of course, from the degree of her eagerness and from the fact that the soldiers were unaware of her ploy, and that they did her a favour and that the act reached its conclusion, but it can also be seen, obviously from the manner of her death. Lots of people who’ve fallen from a high roof haven’t suffered any injury at all. Others have been crippled in some part of their body but have gone on to live for many years after the fall. But in the case of this blessed girl, God didn’t allow any of this to occur, but commanded the body to liberate the soul immediately, and He then received her as if she had fought valiantly and fulfilled everything that was asked of her. Because her death wasn’t due to her body’s fall, but to God’s command. And her body lay stretched out, not on the bed but on the ground. Not on dishonoured ground, but on honourable ground, because it had received a body clothed in so much glory. And precisely for this reason, the body was even more honourable for lying on the ground, because the dishonour we suffer for the sake of Christ bring us greater honour.

And so her virgin body, purer than any gold, lay stretched on the ground of a narrow street and the angels dressed her in burial array, all the archangels honoured her and Christ Himself was present. Because, just as a master of the house wouldn’t have been ashamed to accompany the funeral cortège of the best of his servants, how much less ashamed would Christ be at honouring with His presence her who gave her soul for His sake and agreed to face such a great danger. She lay on the ground, her martyrdom her funeral address, adorned with the jewel of confession, clad in a garment more precious than any royal robes and than any honourable purple. In fact she had two garments: the raiment of virginity and that of martyrdom and it was with these grave-clothes that she would present herself at Christ’s judgement-seat.

Let us ensure that we also wear such raiment while we live and when we die, in the knowledge that, if you bedeck your body with cloth of gold, it benefits you not a jot, and brings much condemnation with it, because you’ll not have abandoned vanity, even in death. But if you attire yourself in virtue, praise will be heaped upon you even after death. Because the grave in which rests the body that lived in virtue and piety will be more splendid even than those of the royal court. And of this, we are witnesses, who, ignoring the tombs of the rich as though they were mere caves, even if they’re hung with gold cloth, hasten eagerly to this saint, because this particular martyr left this life having clothed herself in virginity instead of garments of gold.

Let us, then, imitate her with all our strength. She disregarded this life: let us do the same as regards the life of ease, let us mock luxury, avoid drunkenness and resist over-indulgence in food. This is why I beg and entreat you to have this saint ever in your thoughts and not to bring shame on the feast, nor deprive yourselves of the boldness which this feast provides. Because it’s not by chance that we speak with pride to the pagans about the attendance at this feast, shaming them and reminding them that a young, dead maiden brings together a whole city and such a host of people, every year, even after so many have passed, and the continuum of the feast in her honour has never once been interrupted. Because if the vast crowd that has gathered now approaches in good order, it will be a great adornment for us. But if it comes with sloth and indifference, it will be to our shame and condemnation.