Encomium to the Holy Martyr Pelagia – 1

Blessed be our God: because women, too, now mock death, and maidens laugh at it, as do virgins, and, indeed, very young girls who have not known marriage dance on the barbs of Hell without suffering in the least. All these good things have been granted to us because of Christ, Who was born of a Virgin. Because after those blessed, unbearable pangs and most frightful birth, the sinews of death were undone, the power of the devil was paralyzed, and not only among men any more, but even to women it became contemptible. And not only among women, but among maidens, too. Just as if an excellent shepherd who has caught a lion which was terrifying the sheep and gobbling up the whole flock, has pulled its teeth, cut its claws and shaved its hair, making its contemptible and a laughing-stock, and has given it to the herdsmen’s boys and girls to play with. In the same way, Christ has captured death, which was dreaded by our nature and inspired fear throughout the human race, and has dispelled all the fear it induced and has handed it over to virgins to mock. 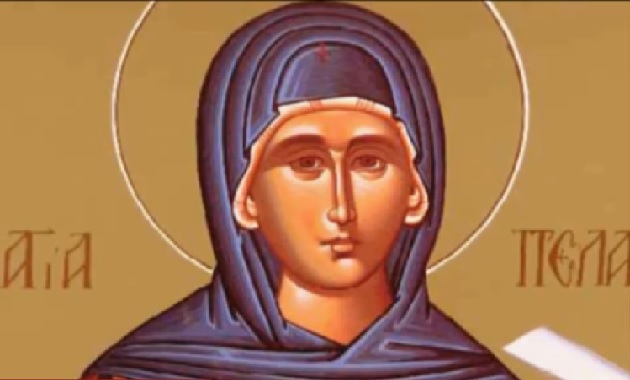 This is why blessed Pelagia hastened towards it with such pleasure that she didn’t have to wait for the hands of the executioners, nor to be taken to court, but, with her exceptional willingness, she frustrated their brutality. Because she had been prepared for both the torture chamber and the hell-hole and for every kind of punishment, but she was afraid she might lose the crown of her virginity. And so you can understand how frightened she was of the lewdness of the impious she frustrated them and snatched herself away before suffering any foul dishonour.

This was something that none of the men had ever attempted: they were led before the court and proved their bravery there; but the women, because of the sensitivity of their nature, came up with this form of death. Because, had it not been possible to win two crowns- of virginity and of martyrdom, she wouldn’t have avoided being taken to trial. But then she would certainly have one of the two, and she thought it the height of absurdity to leave this world with one crown  when she could, in fact, gain both. This is why she didn’t want to go to court, so that she would not be gawped at by lustful eyes, and to prevent the lewd onlookers from feeling any pleasure by looking at her face, thus dishonouring that holy body. But from her house and the women’s quarters, she went directly to another home- heaven.

Indeed, it is a great thing to see executioners standing around and piercing your sides, but what she did is in no way inferior to this. Because among the former, their senses have already been somewhat dulled because of the various tortures they’ve undergone and so death no longer seems so terrible, but is regarded as a release and relief from any further trials. But Pelagia, who had not yet suffered anything of this nature, but still had her body intact and had felt no pain so far, needed some great and brave attitude if she were to deprive herself of this present life through violent death. So when you admire others for their endurance, admire her also for her bravery; when you’re astonished at their endurance, be surprised also at her bold mindset, because she had the valour to undergo such a death.

And don’t dismiss that event too easily, but think if it was natural for a gentle girl, who knew nothing beyond her room, to even think about such great issues at the moment when she saw soldiers arriving, standing in front of her door, summoning her to trial and to be dragged through the market-place. Her father wasn’t at home, nor were her mother, her nurse, her serving-maid, any neighbours or friends, but she was entirely alone with these executioners.

So the fact that she was able to go out and respond to these murdering soldiers, to open her mouth and speak, to look at them, stand there and breathe at all, is this not worthy of astonishment and admiration? These are not features of human nature. Of course, the greater part of her attitude was due to God’s help. But she herself did not drag her heels; she willingly offered whatever depended on her, such as her eagerness, her attitude, boldness, will, predisposition, and her enthusiastic and hasty acceptance. But for all this to happen, it was achieved with the help of God and heavenly favour. So it is right to admire her and praise her: praise her for her alliance with God; and admire her for her own willingness. Because how could anyone not be surprised at hearing that, within a minute, she took such a great decision, confirmed it and carried it out?

Because all of you certainly know that we’ve often thought about something for a long period and, when the time comes to do it, because our minds retain a sliver of fear, we forget all we’ve decided and hesitate for a moment out of anxiety. But she was able, in a moment, both to accept the decision and act on it, terrible and dreadful though it was. Neither the fear of the soldiers present, nor the difficulty of the moment, nor the fact that she’d been left alone in the house, nor any other thing disturbed this blessed girl. But, as if surrounded by friends and acquaintances, she did everything without fear and very well. Because she wasn’t really all alone there; she had Christ to advise her. He helped her, He touched her heart, gave courage to her soul, and He alone dispelled her fear. And this was no coincidence, because the martyr had already prepared herself to be worthy of His aid some time before.

She went outside, then, and asked a favour of the soldiers: to be allowed to go back in and change her clothes and when she did so, instead of corruption, she put on incorruption; instead of death, immortality; instead of this fleeting life, life immortal. But apart from all the rest that has been said, I admire this, too: how did the woman deceive the men, how did they suspect nothing of what was about to happen, how didn’t they see through the ploy? Because you can’t say that nobody else had ever done anything of the sort: many, perhaps, had thrown themselves off cliffs, into the sea, raised a knife to their breasts, passed nooses around their necks.

Those times were filled with dramas such as these, yet God blinded their hearts so that they didn’t realize what she was up to. This is how she escaped the nets. Just as a deer that’s fallen into the hands of the hunters and then, having escaped , stops running, at the top of a mountain which is inaccessible to the hunters and too far away for them to fire arrows at it, and from there looks down without fear on those who had previously wanted to harm it, so, even though she’d fallen into the hands of the hunters and was trapped in her house, as if in a net, Pelagia ran, not to the top of a mountain, but to the very heights of heaven, where it was no longer possible for them to ascend and, looking down on them thereafter, as they left empty-handed, she rejoiced at seeing the unbelievers covered in great shame.