Experiencing the Joy of the Resurrection on the Holy Mountain

The site near the sea where the Russian monastery lies isn’t among the most beautiful locations on the Holy Mountain. The areas surrounding many other monasteries are much more picturesque and attractive. The spacious monastery (all white, with green cupolas and roofs) was built without a plan- here and there, up and down, not all at the same time- and seems charming, thanks to this irregularity, but its architectural value is considerably less than that of various Greek monasteries, and especially than the wonderful Bulgarian monastery of Zograf.

Before the monastery lies the sea, which is often very monotonous and is limited on the horizon by the blue line of the peninsula of Sithonia. Behind the monastery, almost touching the windows of the buildings at the back, rises a high hill which isn’t covered with dense, beautiful forest, but with low, thick bushes, which, in summer, are somewhat depressing because they’re all the same and their dark green foliage doesn’t move, but shines irritatingly under the rays of the relentless, burning sun. 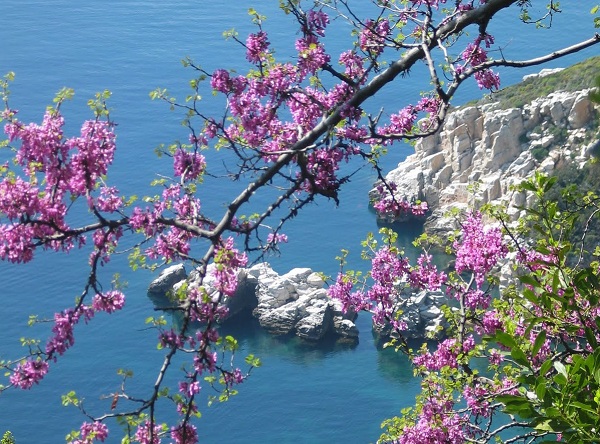 But just at the time of the Great Fast and before Easter, this hill gradually becomes variegated and as beautiful as a richly decorated carpet.

For a short time, the low bushes are bedecked with white, pink and yellow flowers. Among these beautiful patches of intense colour, other shades start to appear- greens and reddish-browns: these are the new leaves on some bushes which haven’t yet turned green. The monastery’s mules happily wander around in these bushes, their bells peacefully clanking. The air isn’t too warm yet, but is rather fragrant. Each morning, the birds in the forest sing loudly. It’s as if nature itself is preparing, richly and joyfully, to celebrate ‘the feast of feast and the triumph of triumphs’.

The last evening arrives. Everything is silent, the monastery cells are closed, the long, narrow corridors quiet, the churches empty. There’s not a soul out in the woods, on the hill or along the shore.

And then at precisely midnight, there’s a loud stroke of a hammer on the wooden sounding board. Then another and another, ever more frequently. Suddenly, after that sound has died away, the bells are ringing triumphantly and loudly. Everything comes to life at once. Doors creak and open, voices are heard, lights flicker everywhere. Before us, the open churches are ablaze with hundreds of candles.

Everything awakes with joy and vitality. Even the tiredest of people feel an incomprehensible sense of excitement.

The end of the ‘great sea’ of bodily torments and the once unbearable spiritual struggle, the sorrow and the bitterness.

We’ve reached the shore- the joyful and flower-covered shore. Now we shall rest. We’ve deserved it.

‘Christ has risen from the dead, trampling down death by death…’

Matins on the eve of Easter Sunday lasts all night on the Holy Mountain, through to the morning. Then everyone disperses for a while, before meeting again in church for the early Divine Liturgy. I’m not sure what to call this brief interlude in the service -a time for rest or a new trial? For others it might be necessary- for those praying or singing- but for us pilgrims, I think it would have been easier not to leave and lie down. Getting ourselves back for the liturgy is very difficult. More coercion, more hard work, after an all-night vigil. But then I remember that the Divine Liturgy itself never lasts very long on the Holy Mountain, and I felt such joy and elation, just as at the beginning of Matins, when we first heard the Resurrection hymns and couldn’t get enough of the hearing the incomparable words which were repeated so often: ‘Christ has risen from the dead, trampling down death by death’. The real consolation, however, after the food, after a long and quiet sleep, without any coercion, was still awaiting us: Vespers, which in Greek they call ‘the second Resurrection’.

For us in Russia, this Vespers on Easter Sunday passes almost unnoticed for most people, but in the East, lots of people gather for it- as many for Matins and sometimes even more- because at this service, which doesn’t last long and is held at a very convenient time of day, something quite unusual happens, something which is enough to excite the curiosity even of people who aren’t in the least religious: the Gospel is read in a variety of languages.

It’s well known that at this Vespers the Gospel of Saint John is read, where the subject is the second appearance of the risen Saviour (the first was to Saint Mary Magdalene) to His disciples, who had all gathered together, except for Thomas. When the latter returned later, he submitted to doubt and said that he would not believe unless he touched Christ’s wound with his own finger.

This is why, in the East, there’s this folk custom of calling the service ‘the second Resurrection’, that is, the second Appearance. There’s no rule regarding the languages in which the Gospel is to be read, nor should there be. The reading can be in all languages- both those familiar to the people in attendance and those which are unknown to them. In both instances, the impression is very powerful.